So what is considered a slew of things? Not sure exactly but it sounded good, but I know that Nyko has announced plenty of accessories for VR and game consoles at CES this year. More details below for you…

Inventive video game accessories manufacturer Nyko Technologies today unveiled a new line of game console and VR accessories at the 2017 Consumer Electronics Show (CES) in Las Vegas for PlayStation®VR, HTC Vive™, Xbox One™ S, and PlayStation®4 Slim and Pro editions. The new VR products include Charge Block for PSVR, a drop and charge solution for controllers, and VR Halo, a padded slip-on cover for Vive controllers designed to protect your gear from daily wear and tear. Nyko also unveiled an updated version of its popular Data Bank Pro storage solution for the PS4 Slim and PS4 Pro, and Modular Charge Station S for the new Xbox One S. All products are set to launch in 2017. 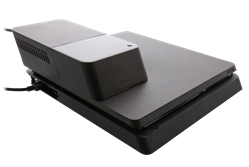 “This year’s product lineup combines Nyko’s history and established legacy with our vision for the future of VR and gaming technology,” said Chris Arbogast, Nyko’s head of sales and marketing. “We’re not only expanding our line of innovative VR accessories with new charging, storage, and controller solutions for PSVR, and HTC Vive, but we’re also updating some of our most valued products for the new generation of consoles.”
VR Accessories
Charge Block for PlayStation VR
Charge Block is a simple, sleek drop and charge solution for PlayStation Move Motion controllers. The block plugs into any wall outlet or USB port for rapid recharging and can also connect to multiple Charge Blocks from different platforms to create a clean, universal charging system for all your gaming needs. Charge Block for PSVR will be available in 2017 for an MSRP of $19.99.
Charge Link for PlayStation VR
Charge Link is a 10-foot USB Y-shaped charging cable that enables simultaneous charging of both PSVR controllers. The extra-long length and flexible Y-shape give users ample room for uninterrupted gameplay while charging. The Micro-USB cable is universal and can charge any device that uses a standard USB port. Charge Link for PSVR will be available in 2017 for an MSRP of $14.99.
Charge Base for HTC Vive
Charge Base brings the unique drop and charge functionality to the Vive’s wireless controllers using Nyko’s patented dongle charging technology. Simple LED lights illuminate to indicate the charge status of the controllers. Charge Base is AC powered, and plugs into any standard outlet for faster recharging. Charge Base will be available in 2017 for an MSRP of $29.99.
VR Halo for HTC Vive
VR Halo is a padded slip-on cover for Vive controllers designed to protect your gear from daily wear and tear. The cover easily slips on to the top of the Vive controller without blocking any sensors, buttons, or ports for seamless gameplay. VR Halo will be available in 2017 for an MSRP of $9.99.

Console Customization for Xbox One S and PlayStation 4 Slim and Pro
Battery Block for Xbox One
Battery Block is a rechargeable solution for Xbox One batteries that frees you from the endless barrage of disposable batteries. Battery Block comes with one 1200mAh rechargeable battery and replacement cover. Using a simple spring-loaded chamber, users can easily press the battery in and out of the the block to charge it – the battery glows red while charging, and then turns green when ready to be used. Battery Block plugs into any wall outlet or USB port for rapid recharging, and connects to other Charge Blocks from different platforms to create a universal charging system. Battery Block will begin shipping later in 2017 for an MSRP of $24.99.
Data Bank Pro for PlayStation 4 Slim and Pro
Data Bank Pro is an essential, add-on accessory for the PS4 Slim and Pro that expands the internal memory by allowing the use of an additional 3.5-inch hard drive. The Data Bank Pro is easy to install – it plugs into the hard drive bay via the included SATA adaptor and USB cable by accessing a single screw (using an included screwdriver). Once users remove the 2.5” drive and reinstall it along with a 3.5-inch drive using the included adapter, they can easily cold-swap between the two drives with a simple flip of a switch. The versatile design allows the Data Bank to rest on top of the PS4 or alongside it, so that it can be used in both the vertical and horizontal positions. It also has a dedicated AC cord to power the drive, so it avoids pulling additional power from the console. Data Bank Pro will be available in 2017 for an MSRP of $39.99.
Modular Charge Station S for Xbox One S
Modular Charge Station S is a simple drop and charge solution for Xbox One S controllers. It attaches to the top of the console and compliments the sleek design of the Xbox One S, allowing simultaneous charging of two wireless controllers via the two included rechargeable battery packs without the hassle of pesky cords. Two included rechargeable battery packs provide up to 25 hours of play time. Modular Charge Station for Xbox One S will be available in 2017 for an MSRP of $29.99.

To learn more about Nyko and its various products, visit: Website: www.nyko.com