A flash drive with a microUSB connection on it instead of the regular style USB. I don’t think I’ve ever seen one before but that microUSB connection makes it able to be used with things like our Android phones and tablets for added storage.  The Flash Voyager Go is compatible with USB 3.0 and downward and it comes in 16gb, 32gb and 64gb and is priced at $20, $30 and $50 respectively with availability later this month. 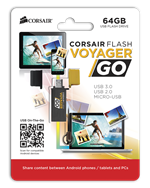 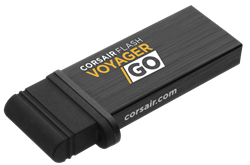 Corsair®, a world leader in high-performance components to the PC hardware market, today announced the Flash Voyager® GO USB 3.0 flash drive in 64GB, 32GB, and 16GB capacities. The exceptionally lightweight, thumb-sized drive has both a USB and a Micro-USB connector, providing convenient data transfer and storage for PCs, notebooks, and Micro-USB OTG-compatible Android phones and tablets.

The Flash Voyager GO’s Micro-USB connector enables transfer of videos, music, and photos from and between OTG-compatible Android devices while the USB 3.0 connector enables easy and fast storage of those files to and between desktop and laptop computers. The drive also provides convenient storage expansion for OTG-compatible phones and tablets to free up precious device memory.

The Flash Voyager GO supports USB 3.0 and USB 2.0 for high-speed transfer speeds of up to 135 MB/s on PCs under Microsoft® Windows®, Mac OS® X, and Linux® with no additional software required. A durable keychain and two caps, one black and one yellow, are included.

“The Voyager Go is the next evolution in mobile storage devices. In addition to supporting PC to PC connectivity, the Voyager Go addresses the ever expanding mobile device ecosystem and also connects it to the PC world,” said Jeannie Khoo, product manager for USB flash drives at Corsair. “The Flash Voyager GO provides Android device users with one stop, immediate, cost-effective transfer and storage."

The Flash Voyager GO flash drives will be available in January from Corsair’s worldwide network of resellers and distributors. They are backed by a 5-year warranty and Corsair’s well-earned reputation for quality, compatibility, and performance.

Suggested retail pricing is as follows: