HALO and Anime… two of my favorite things together…

A renowned set of storytellers from some of the world’s leading anime studios in Japan are about to take one of the most iconic franchises in science fiction and video games to a new level. Microsoft Corp., in collaboration with some of the most acclaimed anime creators, today unveiled a new project called “Halo Legends,” which will bring the “Halo” franchise and its sweeping sci-fi saga to an entirely new medium, in the form of several original anime short films.

“Halo Legends,” which will officially debut at a panel presentation today at Comic-Con International in San Diego, is being produced by Microsoft’s 343 Industries and features creative direction from anime pioneer Shinji Aramaki, director of the critically acclaimed “Appleseed” and “Appleseed EX Machina” anime features, and Mamoru Oshii, director of the landmark “Ghost in the Shell” movies, with additional production from Joseph Chou of J-Spec Pictures. The compilation will include a series of short stories that explore different times, themes and characters from the “Halo” universe and will be distributed globally by Warner Home Video, a Warner Bros. Entertainment Inc. company. Influential studios that are part of the project include the creators behind some of the most popular and celebrated anime to come from Japan, such as “The Animatrix,” “Cowboy Bebop,” “Fullmetal Alchemist,” “Ghost in the Shell,” “Dragon Ball” and more. 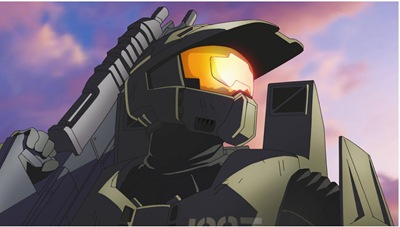 “The opportunity to work with talents such as Shinji Aramaki, Mamoru Oshii and others from some of the greatest anime studios is a very rare opportunity for Microsoft,” said Frank O’Connor, “Halo” franchise development director and provider of story and creative direction for 343 Industries. “We’ve seen the world through Master Chief’s eyes, and we’ve experienced facets of the universe through a variety of literary prisms, but now we get to watch new tales unfold in really rich, visually dynamic ways. I think anime fans and ‘Halo’ fans alike are in for a real treat.”

Set hundreds of years in the future, the “Halo” series of games and novels chronicle mankind’s struggles against an alien collective known as the Covenant. The Covenant is scouring the universe for relics it believes will lead it to a new life and is destroying civilizations and planets that stand in its way. The most prolific hero from the fiction is a super soldier or Spartan known as Master Chief, who is the main protagonist in the original trilogy of Xbox and Xbox 360 “Halo” titles. In the trilogy, Master Chief discovers that the Covenant is intent on activating a series of mysterious ring worlds known as “Halos,” which would ultimately exterminate life throughout the universe. He becomes mankind’s champion in a race against an unrelenting enemy in its most desperate hour. Through The New York Times best-selling novels, comics and additional Xbox 360 games such as “Halo Wars” and the upcoming “Halo 3: ODST,” the universe has grown and tales of other heroes have emerged.

“‘Halo’ and its characters are a very natural fit for anime,” said Aramaki, creative director for the “Halo Legends” project. “As a fan of the ‘Halo’ universe, it is an honor to work with Microsoft and my very talented peers from other studios to create this collection.”

The complete “Halo Legends” collection will be distributed by Microsoft partner Warner Home Video, which will have more to announce on its release and distribution plans soon.

“As a leading entertainment distributor and a company identified with premier anime content, we’re very pleased to be working with Microsoft on ‘Halo Legends,'” said Amit Desai, vice president, Family, Animation and Partner Brands Marketing, Warner Home Video. “The combination of the talent involved and the ‘Halo’ brand ensure the collection is something consumers are really going to enjoy.”

A preview of select “Halo Legends” episodes will first debut on Xbox LIVE, the largest gaming and entertainment network in the world, starting this fall through a new experience called Halo Waypoint. Launching in fall, Halo Waypoint will be a new destination for “Halo” fans on Xbox LIVE around the world. It will inform fans of the latest “Halo” news and activities, and grant access to content ranging from podcasts, trailers and screenshots, to exclusive video footage you won’t find anywhere else. It also will provide a new challenge for “Halo” gamers with a career system and player rankings tied to both in-game and out-of-game accomplishments related to “Halo.” In addition to the limited, early episode premieres, Halo Waypoint will debut several behind-the-scenes videos that chronicle the making of “Halo Legends.”

More information will be shared about “Halo Legends” today at a panel at Comic-Con International in San Diego. The “Halo” franchise panel will be hosted by O’Connor, moderated by Chou, and will feature guests Aramaki; Mitsuhisa Ishikawa, president of Production I.G; and Tanaka, president of STUDIO4 Degrees C. The panel takes place from 4:30 to 5:30 p.m. PDT in Room 6BCF of the San Diego Convention Center. “Halo Legends” panelists will sign autographs at the Microsoft Xbox 360 booth in Hall G #5225 from 6 to 7 p.m. There also will be a signing at the Warner Bros. booth Hall F #4329 on Friday, July 24, from 10:30 to 11:30 a.m., with O’Connor and 343 Industries’ managing editor Kevin Grace on hand to answer questions about the project. In addition, the first trailer for “Halo Legends” will debut exclusively tonight on “GameTrailers TV with Geoff Keighley,” airing at 12:30 a.m. ET/PT on Spike TV.

The “Halo” franchise is an award-winning collection of properties that have grown into a global entertainment phenomenon. Beginning with the original “Halo: Combat Evolved” for Xbox in 2001, the rich fiction of the franchise has since inspired a series of blockbuster Xbox and Xbox 360 video games, The New York Times best-selling novels, comic books, action figures, apparel and more.

Published by Microsoft Game Studios, the “Halo” franchise of games is exclusive to the Xbox 360 video game and entertainment system and the games are optimized for the Xbox LIVE online entertainment network. More than 27 million copies of “Halo” games have been sold worldwide, driving more than 2 billion hours of gameplay by people connected to Xbox LIVE. In February 2009, the “Halo” franchise expanded into the real-time strategy genre with “Halo Wars,” which went on to become the best-selling real-time strategy game on any current generation console. On Sept. 22, 2009, Microsoft will release “Halo 3: ODST,” the next chapter for “Halo” and prequel to the events that transpire in “Halo 3.”

343 Industries is the publisher of the blockbuster “Halo” series of videogames and, as part of Microsoft Game Studios, oversees the “Halo” franchise, including novels, comics, licensed collectibles, apparel and more. 343 Industries is home to world-class developers working on future “Halo” projects, including “Halo Legends” and Halo Waypoint, as well as partnering with renowned developers such as Bungie LLC and Robot Entertainment to produce “Halo” games for Xbox 360 and Xbox LIVE.

Xbox 360 is a premier video game and entertainment system. It is home to the best and broadest games as well as the largest on-demand library of standard- and high-definition movies and TV shows connected to the television — with music coming this fall. The digital center of the living room, Xbox 360 blends unbeatable content with the largest online social network of 20 million members on Xbox LIVE to create a limitless entertainment experience that can be shared at home or across the globe. With the addition of currently code-named “Project Natal,” Xbox 360 will forever transform social gaming and entertainment with a whole new way to play — no controller required. More information about “Project Natal” and Xbox 360 can be found online at http://www.xbox.com/projectnatal and http://www.xbox.com/.

Xbox LIVE is the largest gaming and entertainment network and delivers more entertainment than any device connected to the television, including movies, TV and games, with music coming this fall. This fall, Xbox LIVE also will be the only entertainment service to provide instant-on 1080p streaming HD video from Zune video in supported countries. With an active community of more than 20 million people across 26 countries, Xbox LIVE lets you play the best games, enjoy the largest on-demand library and, coming soon, listen to millions of songs — all while connecting to friends anytime. An Xbox LIVE Gold membership provides you with exclusive benefits and premium access to entertainment from the top studios and services, all in one place. More information about Xbox LIVE can be found online at http://www.xbox.com/live.

← SilverStone RAVEN RV02 is comimg soon in the middle of August !
What if Microsoft and Apple did the World of Warcraft movie? →