The Hyper iStick has both a USB connection and a lightning connector so you can use it with Apple and basically any other USB device. The iStick was on KickStarter and they were asking for only $100,000 but they got well over one million  so apparently this is something that people really want. Prices vary depending on capacity but details below for you.. 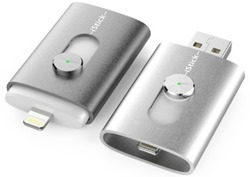 Sanho Corporation – manufacturer of the HYPER line of mobile accessories – announces iStick, a USB flash drive with both a USB connector as well as an Apple MFi Certified Lightning Connector that connects directly to recent iPhone, iPad and iPod touch models. iStick allows users to easily, quickly and safely transfer data between computers, iPhones, iPads and iPod touches without the need for computer synchronization, Internet, wireless networks or the Cloud where hackers and others (like 3rd party server providers) may gain access.

iStick started as a Kickstarter campaign that ran from May 12, 2014 to June 17, 2014. HYPER was seeking $100,000 via Kickstarter to fund the production of iStick. The funding goal of $100,000 was met within 3 hours of launch allowing HYPER to begin production immediately. A total amount of $1,100,629.00 was raised at the end of the campaign. This is HYPER’s 2nd Kickstarter project after the successful CloudFTP which was the 3rd highest funded Kickstarter Technology project when it ended.
HYPER aims to ship the iStick in August, 2014 to its Kickstarter backers as well as to retail stores in time for the year end holiday shopping season.

Daniel Chin, Founder and CEO of HYPER by Sanho Corporation says "We are excited by the overwhelming response to iStick by Kickstarter backers who not only provide us with the funding we need but also with valuable feedback, ideas and suggestions which allowed us a better product and bring it to market sooner than expected, in time for the year end holiday shopping season. iStick will no doubt be a great gift for Apple iOS device lovers this holiday season."

Connects directly to iPhone, iPad and iPod touch models that use the Lightning connector

Using the app, users can transfer photos, videos and other files between iStick and iDevice

Users can also stream movies (even non-iOS native video formats), music and open files directly from the iStick without first copying to the iOS device.