I got another Kickstarter for you this Monday morning, it’s another phone accessory or well I guess it could be used for a tablet as well. It’s called the Jorno and it’s a Folding Bluetooth keyboard that’s meant to be portable so you can easily and discreetly take it with you for those times you’d rather have a full qwerty keyboard instead of the small on-screen ones like most tablet and phones have. It’s on Kickstarter with 8 more days to go and they’ve reach a little over $76,000 of their $100,000 intended goal to make it a reality. it’s a neat little gadget I guess, but I become very much accustomed to on-screen keyboards and I try and carry as little with me as possible personally. 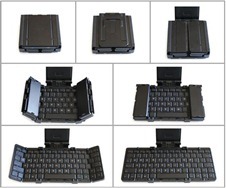 Jorno is the folding Bluetooth keyboard that fits in your pocket and allows you to type with ease anytime, anywhere.  It works with iPhone, iPad and Android devices.  Write email in a cafe.  Take notes in a meeting or class.  Blog wherever you are.

They have announced two new updates to their project:

1) The Earlybird Special has been reintroduced and is unlimited! Meaning you can pledge the low $79 when the MSRP is $119

2) Color choices are now available for the Jorno, including Red, White, and Green

Jorno has 8 days left and is about 85% to the goal. So I thought you’d like to share this news with your readers, so they can take advantage of the new pledge levels. http://www.kickstarter.com/projects/jorno/jorno-the-pocketable-folding-bluetooth-keyboard