Well I guess with the release of the Wii U, Nintenod has to get rid of the old Wii stock and what better way to do that than dropping the price and bundling a decent game with it. Yes I like Wii Sports Resort…  Anyway, the Wii is now $130 and you’ll get Wii Sports and Wii Sports Resort with it along with Wii Remote Plus and Nunchuk. It’s the new Wii and not the old one either, and it’s in black! So if you still haven’t got a Wii, now looks like a good time to get one. 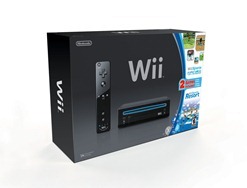 Nintendo is dropping the Wii console to a suggested retail price of $129.99 U.S. in advance of the busy holiday shopping season. The new configuration is beginning to arrive in stores now, and will be broadly available in the U.S. by Oct. 28. This high-value configuration includes a black Wii console and both Wii Sports and Wii Sports Resort on a single game disc, as well as a Wii Remote Plus and a Nunchuk controller – both black to match the console. This configuration replaces the current black Wii that comes with New Super Mario Bros. Wii .

"Nearly six years after it launched, people are still attracted to the pure, inclusive fun of the Wii console," said Scott Moffitt, Nintendo of America’s executive vice president of Sales & Marketing. "A new suggested retail price and the inclusion of two great games make it an easy choice for families looking for a great value this holiday season."

Wii Sports and Wii Sports Resort represent two iconic games that helped pioneer the industry move toward motion-controlled video games. The games include a wide variety of sports that use the controllers in unique ways. Players can try their hand at sports like bowling, tennis, baseball, archery, table tennis and basketball, all while simulating real-life motions using the Wii Remote Plus controller. For the first time, both games are included on a single game disc.

For more information about this and other features, visit http://www.nintendo.com/wii.