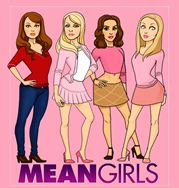 Yep, as of today iOS device users can play mean Girls for free. Not much more to say, if you’re interested PR is below for you..

It’s not my fault you’re like, in love with me, or something! Indie developer So Much Drama is proud to announce that Mean Girls the game, the tiara-defense game inspired by the 2004 Paramount Pictures film, is free to play and available now on the App store.

After listening to its growing, dedicated fan-base, the So Much Drama team wanted to satisfy its community with a totally free-to-play version of the tiara/tower-defense game, Mean Girls. The new free-to-play Mean Girls is an easy-to-play, addictive iOS title that couples the humor, sass, and deliciously charming characters from the classic movie with instantly rewarding tower/tiara defense gameplay steeped inMean Girls movie lore. Fans who had paid for the original app will receive a North Shore Student ID card, which retains the original paid experience by granting access to special Mean Girls-themed challenge modes, removing ads, and more.

Mean Girls’ rich selection of 19 cliques to choose from offers different attack styles to protect North Shore against the youthful onslaught of the new Plastics. From Band Geeks and Preps, to Regulation Hotties and Burnouts, Mean Girls has the gamut of high school cliques covered. It offers seven different ways to play with movie-based gameplay modes such as You Can’t Sit With Us, Social Suicide, She Doesn’t Even Go Here, and The Limit Does Not Exist. For players dedicated to knowing everything about the super awesome Mean Girls world, So Much Drama has peppered the game with more than 70 life-ruining trivia questions referring back to original film.

Get giddy with tons of fun high school characters and cliques