Super heroes to the rescue! I don’t care for online games myself because I don’t like the idea of buying a game and then having to pay every month to play it, but this one is free so I may have to check it out.

Iron Man, Thor, Captain America, the Incredible Hulk and the rest of the Marvel Super Hero Squad combine their might to challenge the evil forces of Doctor Doom and the Lethal Legion – and you control their every move! With Gazillion Entertainment’s Super Hero Squad Online now in closed beta, kids and parents worldwide have the chance to take on the role of their favorite Super Heroes in the first free-to-play Marvel online game. 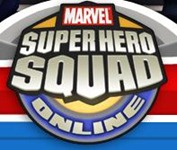 Super Hero Squad Online allows fans to lead their handpicked squad of Super Heroes through exhilarating adventures. Scale buildings as the wall-crawling web-slinger Spider-Man, bash bad guys with Thing’s fists, or destroy mobs of monsters with an optic blast from Cyclops. Super Hero Squad Online is a virtual Super Hero theme park, with both classic Marvel landmarks to explore and new locations to discover, from Baxter Plaza to the Daily Bugle.

Players can bring imagination to life in the fully customizable S.H.I.E.L.D. Helicarrier. Decorate the Bridge, unleash the Squaddies, and watch them interact with anything and everything available! Have Ms. Marvel rock out to the radio or Falcon work out on a treadmill. With thousands of usable items, players will be able to fully deck out their own headquarters for a unique experience that they can share with their friends.

Fans can play the game entirely for free or subscribe to unlock additional heroes, missions and rooms for the HQ. Spin the Prize Wheel for additional in-game Gold, Silver and items. The free-to-play online game is accessible from any browser without complicated downloads or installs, so it’s fast and easy for families to jump in and start having fun.

"As a gamer dad and a long time ‘Cap’ fan, I’m excited to be part of an incredible group making such a great free-to-play Marvel game as Super Hero Squad Online," stated Jason Robar, Vice President and Studio Manager for the Seattle-based Gazillion studio, The Amazing Society. "This generation of kids chooses online games as their primary entertainment. We are bringing them a whole new way to have fun in the Marvel Universe. Now that we’ve reached this major milestone, the whole world can get ready to Hero Up!"

"A plot is afoot in Super Hero City… Seriously, something smells worse in Villainville than Hulk’s laundry – can’t anyone help me clean up this town?!" said Jay Minn, Chief Recycling Director of The Amazing Society.

David Brevik, President and COO of Gazillion Entertainment added, "As a huge Marvel fan and father myself, I’m very excited about Super Hero Squad Online. I grew up with all the great Marvel characters, so sharing them with my family is incredibly fun for everyone."

Pick up an original comic at Taco Bell right now for an exclusive code that gives Beta registrants sneak peek access and an exclusive Super Hero. Or just sign up at www.heroup.com to join the Super Hero Squad Online Beta!