More Ultra 4K HDTV news for today, Seiki has recently announced the availability of a 39” versions of it’s 4K Ultras HDTVs. You’ll be able to pre-order them from Sears with a price tag of $699.99 tomorrow but I just checked their site and you can pre-order them today. The new 39” model features built-in digital and analog channel tuning, USB port for displaying 4K photos via USB flash drive, and multiple video and audio connections to support current high-definition video content. The model is also packaged with an HDMI 1.4 standard cable to enable video resolutions beyond 1080p. I love my Vizio 47” HDTV, even though most people consider it a budget TV, it’s still decent in my opinion so I’d be willing to give one of these from Seiki a try, but it would have to be at least the same size as what I have now… 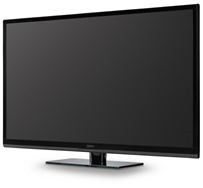 Targeting smart, savvy Ultra High-Definition television (Ultra HDTV) and PC monitor buyers ready to experience 4K digital entertainment, SEIKI Digital, Inc. (www.SEIKI.com) introduces its 39-inch LED 4K Ultra HDTV and adds to its 4K lineup. The new model (SE39UY04) features a panel resolution of 3,840-by-2,160, and an input refresh rate of 120Hz on a 1080p signal and 30Hz on a 4K signal. Shipping at the end of June, the SEIKI39-inch 4K Ultra HDTV will be priced at MSRP of $699.

The new SEIKI 39-inch 4K model will be revealed for the first time at the CE Week Line Shows and Exhibits held on June 26-27 at the Metropolitan Pavilion in New York.

"The first SEIKI 50-inch 4K model was the most talked about Ultra HDTV this year with its stunning picture quality and incredible price point," said Frank Kendzora, executive vice president for SEIKI Brand. "With the introduction of the SEIKI 39-inch 4K model, SEIKI has made 4K Ultra HDTVs even more affordable and ideal for PC users wanting to experience next-generation 4K computing. SEIKI will continue to expand its 4K Ultra HDTV line in 2013 to help accelerate the adoption of 4K digital entertainment and make it accessible to every consumer in the U.S. market."

SEIKI first introduced its 50-inch 4K model (SE50UY04) to the U.S. market in April 2013, and plans to include a third 65-inch 4K model by fall 2013. The new SEIKI39-inch 4K Ultra HDTV will be available through select online and brick-and-mortar authorized retailers, including Sears as the first national retailer to offer the newSEIKI 4K model. Sears will make the SEIKI 39-inch 4K model available for pre-order starting Thursday, June 27 at www.sears.com.

For all of its Ultra HDTV and HDTV models, SEIKI offers the industry’s first one-year, no-nonsense, replacement warranty through its U.S.-based technical support at (855) MY-SEIKI.