Yes more new from Swann, I’m playing catch up today, posting some of the stuff I may have missed. I get all kinds of emails everyday, hundreds of them and things just slip through or I forget. So anyway, Swann has just announced two HD IP cameras that are app powered for ease of use with your Android or iOS devices and of course your PC. The cameras are high definition resolution at 1280×720 and they feature pan and tilt which is something I just love. There two of them, the SwannEye HD Pan and Tilt with an MSRP of $179.99 and the SwannEye HD Plug and Play with an MSRP of $129.99. 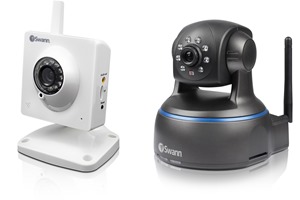 By downloading the free SwannEye HD™ app, smartphone and tablet users can stream live video or view recorded videos and photos via any iOS, PC or Android device. Providing users with the peace of mind that their home or business is safe, the SwannEye HD™ app also sends an e-mail notification when motion is detected by the cameras. Syncing the camera with your smartphone or tablet is made easy and network-free using a unique QR code that comes with each system.

For added nighttime picture and video quality, both cameras include on-board infrared LEDs. The Plug & Play has 12 light sensor-activated LED’s and the Pan & Tilt has eight. Both cameras include built-in microphones so you can hear every sound and conversation happening in real-time or during video playback. Additionally, the Pan & Tilt camera includes an audio input jack and speaker to communicate with intruders via your smartphone or tablet’s microphone.

In addition to the camera, ceiling/wall mounting hardware, theft deterrent stickers, a power adapter and network cable for stable network connectivity are included in the box.