A few years back, a super interesting game was born. It was a game where you got to fully design your own character, draw parts of the levels you were tackling, create your own tools and use your imagination to play the game as you saw fit. It won awards. It sold lots of copies. They called it Drawn To Life.

Now we have a sequel that puts us right where the first game left off. They call it Drawn To Life: The Next Chapter (for a game based around creative input, not a real creative title, huh?). Using many of the elements of the first, with some improvements, this clever little game has a rich concept and can surely provide some fun for a younger crowd. Today we’ll take a look at the DS version of Drawn To Life: TNC, its features, its faults, and get a taste of how horrible an artist I really am.

The game has awesome cover art, showing an animated fellow swinging by a rope, pleasing townsfolk and showing no sign of fear from the evil blob critter watching him with an evil smirk. The game is targeted towards youth, and the vibrant box art speaks to that audience. 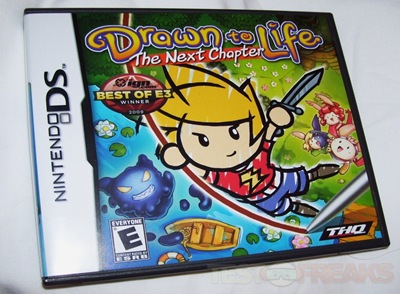 This game is certainly for younger players, as a large portion of Nintendo DS titles are. This game was also released for the Wii, which also advertises itself as a family console. Drawn To Life works by relying on building problem solving skills, requiring creativity via player-created content and presenting it in a fun, lighthearted manner. Keep that in mind when we take a look at the game.

Drawn To Life: The Next Chapter

Your hero. Your adventure.

Once again, the Raposa need your help to save their civilization! Drawn to Life returns to the DS in an all new journey, featuring even more ways to customize your hero and your gaming experience!

Create without limits: Versatile advanced drawing tool features allow for more intricate detail. Use additional colors, new guides, and new brush tools to create a multitude of unique items though out the game.

Let your imagination run wild: Ability to draw multi-limbed creatures means you can create your own hero in any form—human, animal or something entirely different.

Action drawing: Draw objects directly into the game-play to help you advance through the levels. Each color has special powers and gives your creation unique properties.

Morph your hero: Choose to turn your hero into a blob or a spider, each has its own abilities to help you advance through the levels.

Extensive action adventure game-play: Explore 4 new worlds and sail on a special ship YOU create. Collect color drops to progress through the game and unlock content including challenges, quests, customization options and much more!

Swap your creations with friends via multi-card play: Trade heroes, weapons, items and hero accessories with friends who have the game too!

Turning on the game, we are put back in the presence of the adorably silly Raposa – a race of odd animal-esque people who find nothing abnormal in camping out in a village on the back of an enormous turtle. Mari, the mayor, wakes up to find Heather has been kidnapped and Wilfre shows up to start obliterating the perfectly charming color out of everything in the world. This watercolor-turned-white canvas landscape is no good, so the people set out on a quest to find the missing girl and take down evil. There’s your story.

You’re the affectionate Creator, an omnipotent deity in charge of creating a Hero to help save these poor souls from living the rest of their lives in stark emptiness. This is one of the first things you create. Unfortunately, it takes a while to get there.

The first hour or so of the game has you learning the ropes. You develop your character during that time, learn to control it, name it, give it a weapon and learn to draw environmental elements. The rub is that during that hour, you’ll play for about ten minutes. The rest of the time is spent watching well-created, well-scripted, but painfully slow cut-scenes. This reality is one of my least favorite parts of the game. It’s a childrens’ game on a hand-held console, but these scenes are Kojima-length. When I first pick up a DS game, I want to play it, not sit and watch a 3” screen for an hour. A lot of children simply won’t be able to deal with this pacing from the get-go.

Honestly. You need to grasp what a problem this is – not just in the beginning, but throughout the game. The storytelling is constant and repetitive, and never gets any quicker. You’ll spend as much time pushing A to advance through the tale as you will actually playing, even once things get cooking.

When you do get to creating your hero, the power of the game comes to life. You’re given a few empty boxes for the various body parts, and you can add/remove more, so your hero isn’t limited to just being a human. You can spend as little or as much time as you want with your hero. Mine, a regular guy with an H on his shirt and a big orange beard is named H-Man, and he has a gun for a weapon that is essentially a black line with a handle. I’m far from Andy Warhol – but that’s what makes it awesome.

Yes, there are weapons. But the combat is bloodless and very much more like knocking things down than actually killing them, so it’s kid-friendly violence. You can also jump on foes Mario-style to take them out. 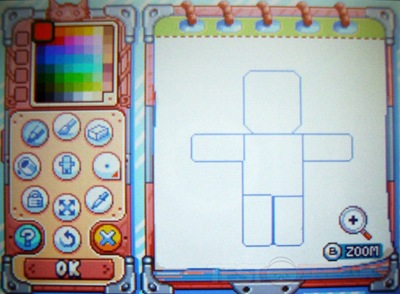 The artistic tools are very well done. It’s easy to look at the palette and figure out what does what, which is a great improvement over the first title. You are really given an enormous amount of freedom to create what you want when the opportunity arises.

The backgrounds and settings in Drawn To Life are amazing and resemble defined paintings. Drawing my own garbage over top of them is pretty humorous, and I enjoyed the dynamic. Creating your own hero and content throughout the levels is a brilliant concept.

One of the problems is you don’t get to do this stuff enough. The levels are simple, so usually you can get through them just by drawing a few lines. Sometimes you’ll create an item that you’ll only use once, while others, like the health potion, show up continually. Overall, the chances to draw things just don’t come up as frequently as you’d assume from the title of the game. The other limitation is that you’re confined to particular boxes to create your drawings – so even though you’re given tons of tools to do what you want, you’ve got to do it within limitations.

A tip is to make sure you utilize the space you’re given. Say you come across a few dotted line boxes. This is the game’s way of telling you you’re at a point where you need to create some platforms to get through the area. It’s showing you this in the shape of a box for a reason. The game doesn’t crop out areas you don’t use, so sometimes you’re left with invisible tangible things in-game if you don’t complete the drawing, which leaves you jumping onto transparent platforms. There’s nothing good about that, so take a minute to assess what you’re doing with the platform and ensure you draw it to suit its purpose.

While the platforming is really simple, let’s remember once again this is a game for kids. It’s usually pretty obvious where to draw your lines and how to get through each stage, but it might not be as obvious for a younger person. I can’t take 20 years off my life and find out.

As you progress through the story, there are many different settings you’ll traverse. All along, you’re battling foes, collecting coins for upgrades and new items and restoring color to each part of the world. To restore color, you have to gather color drops and repaint the scenery before moving to the next bit. You often have to re-attempt certain things multiple times, as any time you draw in-world you are limited to a certain amount of ink or strokes. Drawing things in the wrong places or running out of ink forces you to undo and try again.

Doing all this uses the stylus, and the controls are very responsive. This seems like a title well-suited for the DS, and drawing things most certainly has to be easier on the hand-held than on the Wii version just because of the nature of the input device. 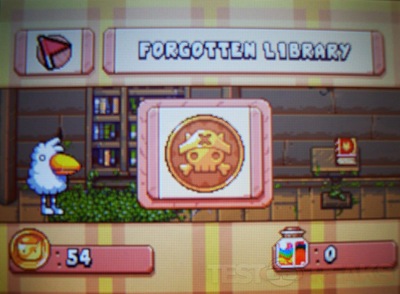 Music is another strong point in Drawn To Life: TNC. The score is well-composed and always reflects the moment. Emotional bits have emotional music. Enemy battles have intimidating music. It’s all designed and scored to be memorable, and suits its purpose. Combined with the stunning visuals, the game is a true sensory success.

Those who liked the first game will love this sequel. Such focus on user-created content is a freedom incredibly unique in this game – and therefore, incredibly enjoyable. Outside of that creative freedom, the game is easy, can be trite and frequently moves at an unbearable pace. The user-created content is enough to rescue Drawn To Life: TNC and make it an innovative title for children. That said, the target market isn’t just kids, but kids with some patience. I wouldn’t expect too many older or experienced gamers to enjoy this game a whole lot, but it’s not made for them, so that point is fairly disconnected.

Overall, it’s a brilliant concept with acceptable execution that largely improved upon the flaws in its successful predecessor. There is a lot to do, and a very detailed story in which to do it. If the pacing were improved, Drawn To Life: TNC would be a truly stellar title that I wouldn’t hesitate for a second to give to any child.

Cons:
-Terribly slow pacing
-No appeal to older crowd
-Not a lot of replay value

3 comments for “Drawn To Life: The Next Chapter for Nintendo DS”