One thing great, or maybe not so great, depending how you look at, is that all people are different, and we all have different personalities. We all like something different and that includes our computers themselves and the desktops we work on. The computer desktop is like your own physical desktop, it’s your workspace and it should be unique to you. We try and customize it with our own often used icons and a unique wallpaper, but beyond that most people don’t really bother to much, as changing icons and ‘skinning’ everything can be a hassle.

Tomorrow, August 27th, Hyperdesk will be releasing their newest desktop theme software for Windows Vista 32 and 64 bit operating systems, before this it was only available for Windows Xp. Today I’ll be taking a look at the DarkMatter: Subspace Hypersuite, it’s a program that will change the looks of your desktop, from wallpaper to icons, folders, and even skinning the media player as well. The design comes from the same people that created the themes for Alienware, and it actually includes 2 different themes, with four variation on them, with two different folder sets as well. It’s any easy to use and inexpensive solution for quickly and easily changing the look and feel of your desktop.


This is downloadable software only so there’s no box shots or anything like that for you.

Once you install the software you can run it as you would any other, up pops the interface on your desktop so you can start changing things. 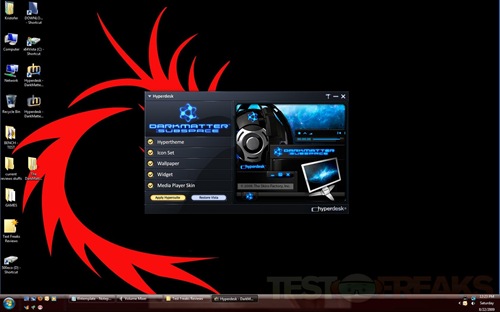 The interface is comprised of five basic parts, Hypertheme, Icon Set, Wallpaper, Widget and Media player Suite. A couple of them have multiple choices like the Icon Set with two choices and Hypertheme, where you’ve got four choices to choose from. 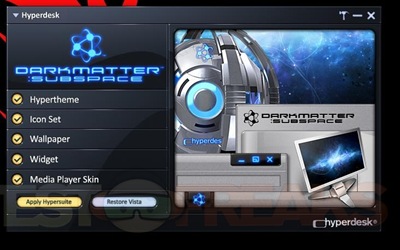 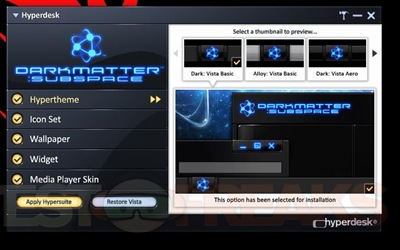 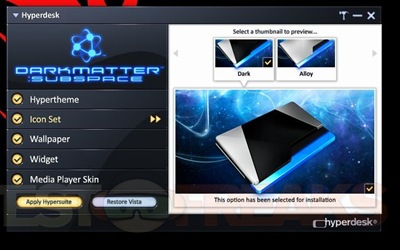 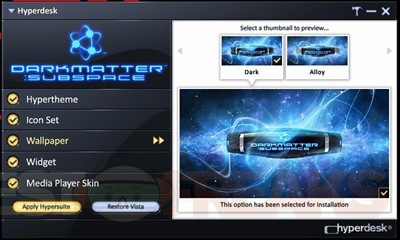 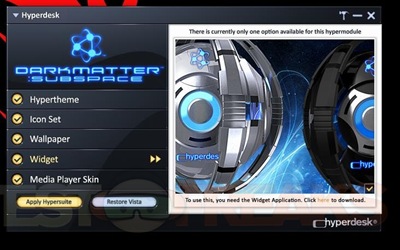 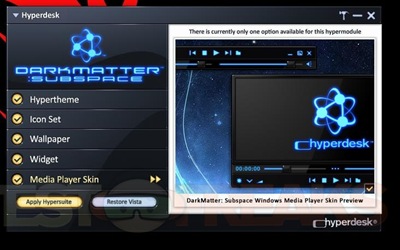 There’s also a drop down menu as well with links and information, there’s a preferences and a how-to use section as well. 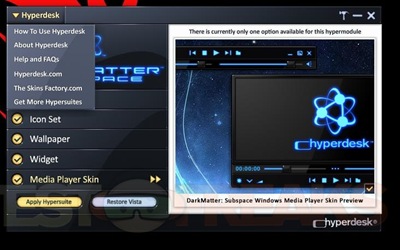 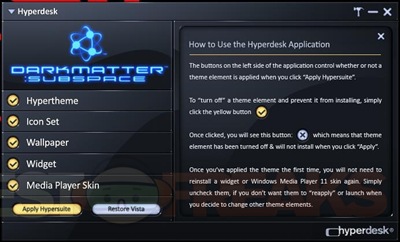 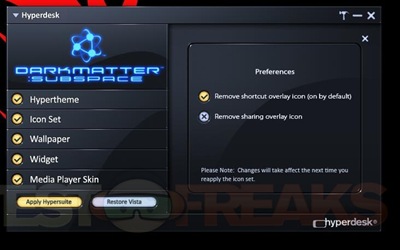 Using it is easy, just make the selections you want an then hit the ‘Apply’ Hypersuite’’ button near the bottom, or you can hit the ‘Restore Vista’ buttons to put things back to normal.

DarkMatter: Subspace contains 2 distinct hyperthemes in both dark and alloy styles, a WMP/iTunes remote Yahoo! widget featuring mind-blowing animations that have to be seen to be believed, a futuristic icon set that includes multiple folder sets, a sleek Windows Media player skin that will play video (and audio) and an amazing otherworldly high-resolution wallpaper. Part of the DarkMatter Trilogy of hypersuites.  You will need to download the free application, Yahoo! Widgets to use the hyper-animated audio remote. You may install this purchased theme on as many personally owned Windows Vista machines that you own, but you may not distribute it. No license key required. Available also in The DarkMatter Trilogy Pack (buy 2 and get 1 free).


Using the Hypersuite we see that it does use a bit of resources, but that’s only when you’re actively using it to change something, once you change it and exit the program it disappears from the processes. 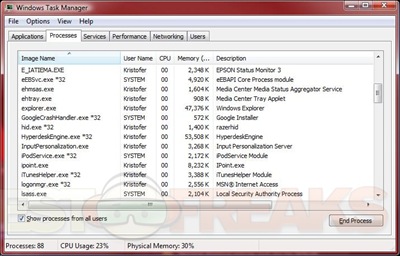 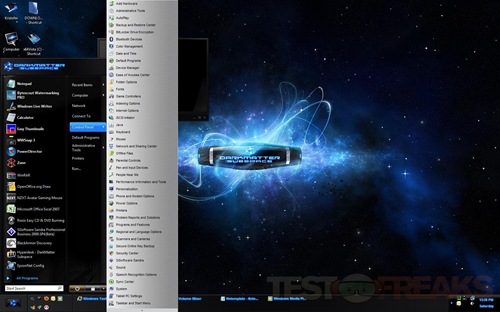 Here’s a collection of other things open to show you how the different options look, including the browser: 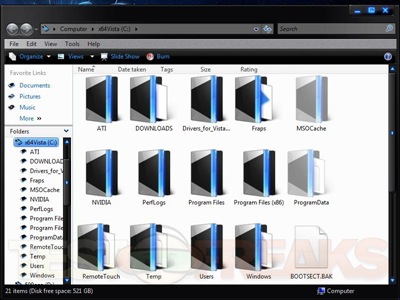 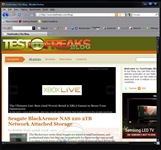 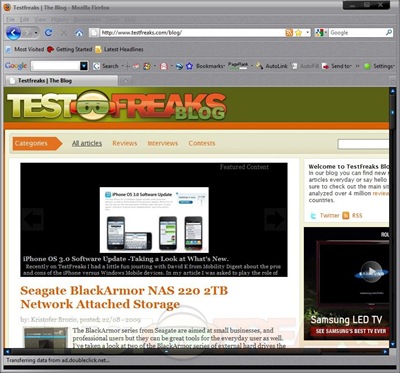 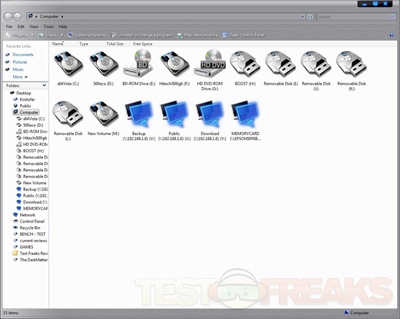 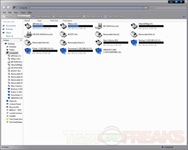 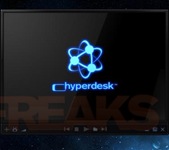 All in all it does an interesting job of changing things around a bit.

There are a few things I don’t like about this program.

The first would be no multiple monitor support, I use three monitors, I don’t want all three to have the same exact wallpaper on them, that’s rather boring. Hyperdesk changes the wallpaper on all three monitors to be the same, but after applying Hyperdesk I can go and change them back to my own wallpapers easily enough, though I shouldn’t have to, there should be something in there that allows me to configure the wallpapers.

The next thing I I don’t like is the fact that it changes the font as well for things on the desktop, especially the taskbar. I use a double sized taskbar, because I’m usually doing a lot of stuff, and I need the room to see what’s going on, I don’t like having them minimized or stacked. It doesn’t bother me too much, but the date is missing, oddly enough that bothers me. I never realized just how much I paid attention to the actual date until it was gone.

Here’s an example of before and after:

You can see the font actually appears to be smaller but yet takes up more space apparently.

The next small complaint could be that when you update a folder, change the contents, name etc, the folder reverts back to the tan Windows folder color at times, but not every time, and it also does not skin all of them. In one of my folders I’ve got folders where half are skinned and the other half are not, there’s really no difference between the folders, they’ve got pictures and text in them, so I don’t know why it didn’t change them as well.

That’s about it for the complaints, but an observation or argument could be the you could do all of this for free really, it would just require a bit of work and research on the part of the user, but it wouldn’t be all neatly packed up in a single program with the interface to change things around quickly.

There is a really big positive to this suite of software though, there’s no copy protection, in that you don’t need a key to activate it at all, just download and install. Part of that is that you can install it on as many Vista computers as you own, there’s no limit, so essentially for one price you’ve bought multiple or unlimited licenses. The only caveat is that they you don’t share or make it publically available to other people.

Conclusion:
The Hyperdesk Hypersuite is a quick and easy way of changing  or customizing the look of your desktop, and considering for one price you can use it on multiple computers it’s not a bad deal.

There are some drawbacks of course as I noted, and of course you can do all of this for free with a little work. Still though it’s nice to be able to just launch a single program and change everything with a couple clicks. 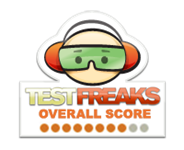 Pros:
+Different choices included
+Easy to use
+No key needed, and you can use it on multiple computers if you wish to
+Easy to quickly change appearance of desktop etc
+Inexpensive

Cons:
-There are free options available that do the same thing with a little work
-Seems to not change everything
-No options for multiple monitor wallpaper
-Seems to change font as well