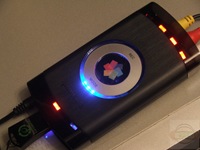 Have you ever wanted to transfer your videos from one device to another only to find that it seems to be a rather complicated process that involves time and usually spending more money. The most common way to do this is to buy a capture card to put inside of your PC and then convert to the format you need, and it’s done in real time so in can be a time consuming and processor intensive process, if the movie it two hours then it will take at least those two hours to complete. Then you’ve got to convert the movie which might involve resizing it for your portable devices or encoding it to a different format to be compatible with those devices.

Pinnacle has sent me over their Video Transfer product for review, it allows the user to simply and easily transfer videos from numerous sources and store them on a portable hard drive, flash drive, iPod or even a PSP. It encodes in MPEG-4 format so the end results will be playable on most devices, and you can even select from three different quality settings as well. The great thing about this device is that it does not use your PC, it’s a stand alone unit, you plug your source video into on end, your storage device into the other, hit record and walk away, no fuss, very simple and easy to do.


First up I’ve got a video unboxing for you, check it out and move on

At the touch of a button, rapidly copy analog video from any source in MPEG-4 quality to any USB 2.0 storage device without using a PC.


This device is meant to transfer movies from many sources, so for testing I thought I’d grab a lip of one of my favorite movies that I’ve still got on VHS, Bubba Ho-Tep with Bruce Campbell. 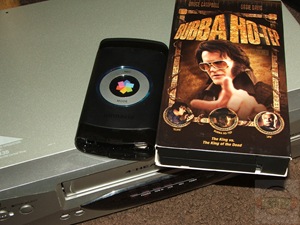 At first I figured I would use my Imation Apollo 2.5" 500gb hard drive to capture the video, but after reading the manual for the Pinnacle Video Transfer I found the device you’re recording to needs to be in Fat file format, and I have the Apollo in NTFS, so I had to opt for another device as I wasn’t about to format my 500gb HDD again. 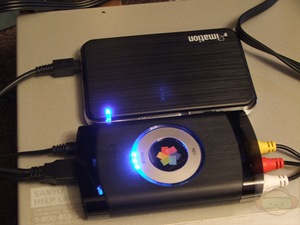 So I ended up using the ATP EarthDrive 8gb USB flash drive as the destination device, much quicker to re-format than 500gb… After you plug in your device the small LED near it will blink red then turn to blue when it’s ready to go. There are two buttons on the Video Transfer, the top one is Record and the bottom is Mode. The Mode button is used to cycle through the quality settings for the video, Good, Better and Best, under the Mode button are three LEDs, one LED for Good, two for Better and three for Best. Depending on what you’re using for the capture device the quality or resolution might differ slightly on the Best setting. 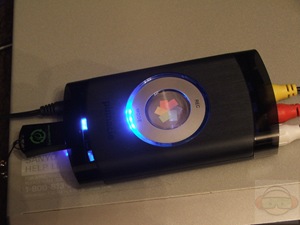 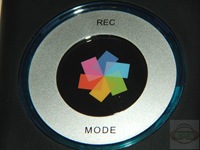 Then you need to turn on your source which would be my VCR, the top lights will turn blue when they sense a signal, you may have to actually hit ‘play’ before the lights will change blue though. 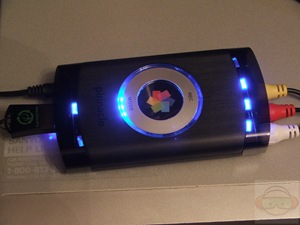 Next you just hit record, the lights will turn red at the top and near your storage device, then you can just walk away and do whatever else you need to do. To stop recording you just hit the record button again. 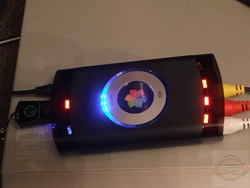 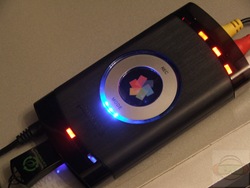 It captures in real time so if the movie is two hours it will take two hours to record or capture it, actually a little bit longer as it takes the Pinnacle Video Transfer a few seconds or so to complete the process after you hit the record button again. It’s very easy to do really, there’s not much the user needs to do except hook it up and press a button.

One small complaint I could have is that it records in MPEG-4, not my preferred format for videos, but that’s what’s popular for portable devices like the iPod. It would have been nice to be able to choose output formats or at the very least Pinnacle could have included a program to convert videos for you.

Here’s an example video, I did nothing to it, just transferred it to my computer from the USB stick and then uploaded it to Viddler. It’s a 6 minute and 36 second clip from Bubba Ho-Tep with Bruce Campbell, the source is obviously a VHS tape as we already saw. (the clip might not be exactly safe for work, there’s swearing and such, no nudity or anything though)

For that clip it ended up to be 79.3MB, if we just round it off and say 7 minutes equals 80mb, so 70 minutes would be 800Mb which is about the average time of most movies these days, and it was recorded on the highest or Best setting. Under 1 gig for an entire movie isn’t too bad, and of course you can use any other program as well to convert the MPEG-4 format to another one that is more suitable to your needs.

It was recorded from a VHS tape so the quality isn’t the greatest, but it’s not bad overall, it’s watchable, obviously the source will have a direct effect on quality of the final product. Yes the video that I got from the Pinnacle Video Transfer looks very similar to the Viddler clip above, the clip does has a bit more interlacing lines in it than the original but that’s to do with their encoding process, still though it’s not the greatest, but on a small device like an iPod or PSP it might not be that noticeable, but still it’s not as good as I expected it to be especially with the settings on high.

The Pinnacle Video Transfer is very easy to use, most people should have no problems at all with it. It’s really just plug your devices in and just walk away, which is very nice as you don’t have to worry about it or worry about resizing or re-encoding for your portable devices.

On the other hand the output quality is not the greatest, and I don’t like the fact that it only uses FAT file system for the storage, and I don’t care for the MPEG-4 codec either, but for most people the codec and the format shouldn’t bother them too much. The quality is decent but not as good as I expected it to be really, I think it could be better, especially for the Best setting running at full screen or 720×480 resolution.

Pros:
Very easy to use
Small and portable
Records from multiple sources
Includes most everything you need to get started

Cons:
Must use FAT file system
Records in MPEG-4
Not the best quality final product
Rather expensive