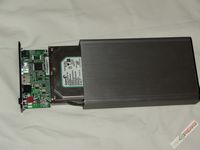 Hard drive enclosures come in many shapes, sizes and styles and they’re all pretty much the same really, you put a hard drive in them and you’re ready to take your data with you wherever you go, but they don’t offer much in the way of security. Yes they’re nice for their portability and ease of use, but if you lose it of it gets stolen then all of the data contained on it is compromised and most likely lost forever.

It’s also inexpensive as well, coming it at about $60, it doesn’t cost  much more than a standard HDD enclosure does, and the few dollars more is well worth the extra features that you’ll get with the Qnap Qback-35s

As is now common please check out the unboxing video then continue on to the rest of the review:

QBack-35S delivers simplicity and stability with stylish design. The eye-catching black titanium case can be placed vertically on the stands provided to minimize the space occupied.

Besides serving as a backup device for Windows PC, QBack-35S can be applied as storage expansion for QNAP Linux- embedded products by formatting the drive on QBack-35 via these products. Users can enjoy large volume expansion as well as high-speed data transfer via the USB 2.0 or e-SATA connection of QBack-35S.

There’s not much to the installation procedures, you just slide the hard drive into the tray  making sure to connect the data and power connections, then use the provided screws to secure the drive to the tray, and you’re about done. I did run into a small problem installing the hard drive, I thought the screws were all the way in but weren’t so the screws hit the rails inside the enclosure and it wouldn’t go in. So I took it back out, and tried to figure out the problem, of course not knowing it was the screws the first time, tried it again and same thing, eventually I figured out it was the screws hitting the rails, so I tightened them down some more, and tried again. Same thing happened, this time I really tightened the screws down to make sure they were flush with the tray, and the try then slid right in, it took quite a bit of force to tighten the screws to make them flush and I actually damaged the screw heads, not sure exactly what the problem was there at all…

Once that’s done just plug it in and power it up, hooking it up to USB port first though to initialize the drive through the Qback software, you can’t do it through the eSATA connection.

To initialize the disc you just need to install the included software and run it, you’re greeted with several steps to walk you though the process, including partitioning the drive to public and secure and creating a password.

Once that’s complete the software is running on your computer and ready to go, a little ‘Q’ sits in the taskbar waiting for your commands. The main menu features four options, Expert Mode, Instant Backup, Instant Restore and Settings.  The Expert Mode for me is really the easiest as all of the options are right there for you.

Once you’re ready to start your backups you just need to select what you want to have backed up, and I like that this program allows you to pick specific folders. You can just keep going down into the file tree to find whatever you want backed up and put a check mark in the box, and only those thing will get backed up.

Backing up things you need to is easy to do and it works well.

Since you can create an encrypted partition it does take a bit longer to do the backups to the encrypted area, but this is not unexpected as the data being transferred has to be encrypted.

The performance of the public access drive is the same as any other standard enclosure.

The quality of the Qback35-s is excellent, it’s well made, and it’s easy to use as well, and it’s smaller than some enclosures I’ve seen on the market today making it very portable.

User manual could be better

Can be hard to install HDD into Qback35-s