Futuremark is well known for their benchmarks, and now they’re  also known for their games too. The most popular of their software is the 3DMark series, and now the newest one is here. They were kind enough to send me over the newest in the series for review, 3DMark 11 Advanced Edition. As with all of the 3DMark software suites, this one too will give your video card and system a workout. The newest versions is all re-done, and it looks nice, very nice. Read on..

3DMark 11 is the latest version of the world’s most popular benchmark. Designed to measure your PC’s gaming performance 3DMark 11 makes extensive use of all the new features in DirectX 11 including tessellation, compute shaders and multi-threading. Trusted by gamers worldwide to give accurate and unbiased results, 3DMark 11 is the best way to consistently and reliably test DirectX 11 under game-like loads.

3DMark score
Benchmark presets offer a convenient way of scaling the benchmark load to provide relevant results for all levels of hardware. These pre-selected combinations of settings represent successively more advanced levels of visual quality. When running 3DMark 11 with one of the presets selected, the benchmark produces a score for that preset. The 3DMark score is calculated differently for each preset which means that scores are not comparable across different presets.

Entry preset
This preset is designed for benchmarking with a low level of load on the graphics card. The benchmark runs in 1024 x 600 resolution making it suitable for most DirectX 11 capable systems including notebooks and netbooks.

Performance preset
This preset is designed for benchmarking with a moderate load on the graphics card. The benchmark runs in 1280 x 720 (720p) making it suitable for most DirectX 11 capable gaming

Extreme preset
This preset is designed for benchmarking with a very heavy load on the graphics card. The benchmark runs in 1920 x 1080 (1080p). Although this setting may well bring many PCs to their knees today it represents the likely loads used by high end games in years to come. This preset is particularly well suited to high-end gaming PCs.

Custom preset
The benchmark can be run with customized settings. When it is run in a resolution with an aspect ratio other than 16:9, the rendering is done within a 16:9 letterbox.

3DMark 11 is a download so there’s no box shots etc. Installation just takes a few minutes and it’s done.

I’ve got it installed on my gaming system with no dedicated physics card installed at the time. The CPU is an Intel C2Q9650, with a Sparkle GTX 465 video card, 8gigs or ddr3 ram on a DFI Lanparty UT X48-T3RS motherboard running Windows 7 64Bit.

A few things have changed since 3DMark06 surely, the interface is totally redesigned.

When you first load it up it’s straight to business, there are four tabs across the top for Basic, Advanced, Results and Help.

You’ll start out with Basic which gives you options for three Benchmarks at the default settings. The benchmarks are Entry, Performance and Extreme. Beneath that you’ll see three choices next to the launcher button. You can run the Full 3DMark 11 Experience which includes the Demos and the Benchmarks. This is actually probably the best to use as the demos help to warm up your card in preparation for the testing. The next two choices are for the Demo only and then for Benchmark tests only. The next tab is Advanced, here you can change all of the settings if you wanted to for custom runs. 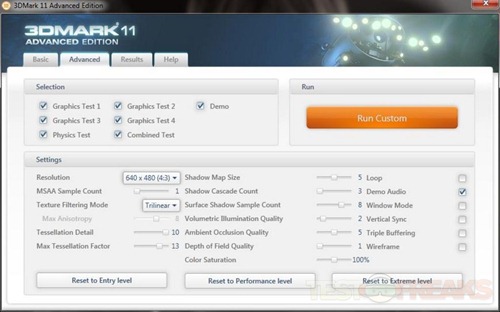 The next tab is Results, after you’ve completed your testing the results will be shown here. 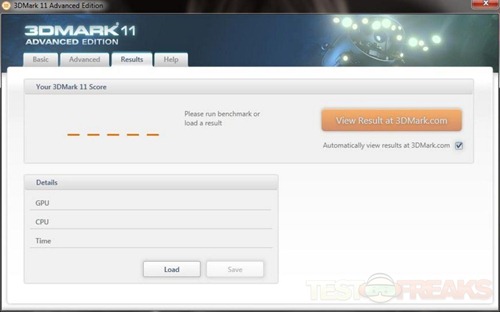 The last tab is Help which just has some information and a link to support. 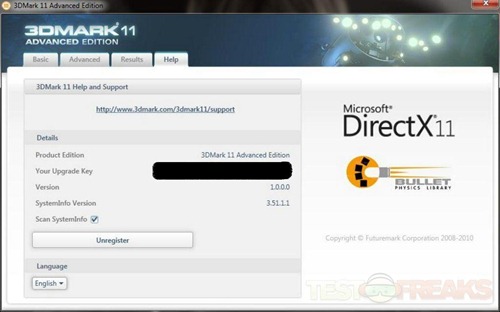 The Demo mode is an audio visual demo in two parts, one undersea and one on land.

Audio visual demo
The audio visual demo is designed to showcase the DirectX 11 graphics from the Deep Sea and High Temple tests accompanied by an evocative soundtrack. Image quality and other effect settings are scaled according to your hardware to ensure decent frame rates. In 3DMark 11 Basic Edition the demo resolution is fixed at 720p while in 3DMark 11 Advanced Edition users can choose from a wide range of custom resolutions. 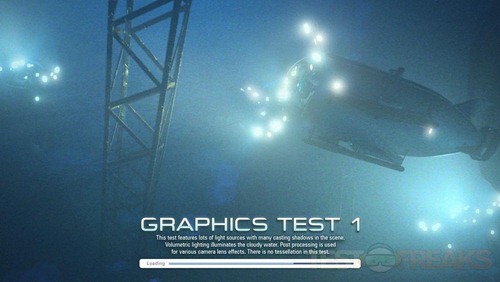 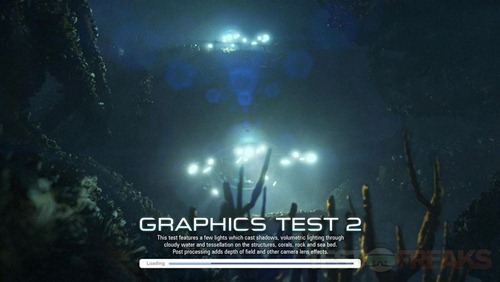 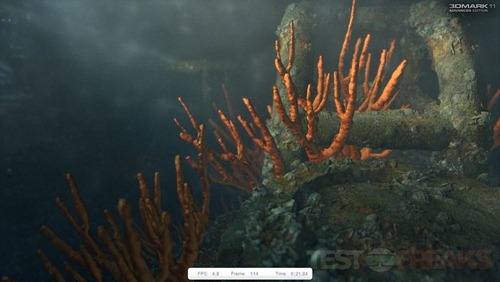 Graphics Test 3 is outside in what looks to be ancient ruins called the High Temple. Graphics Test 4 is another temple scene but this time much more complex. 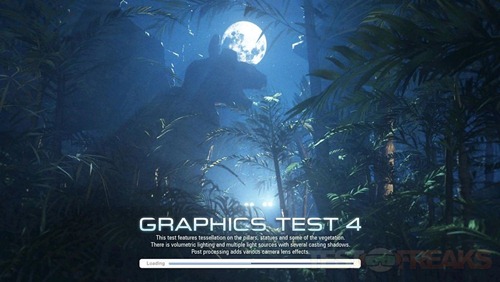 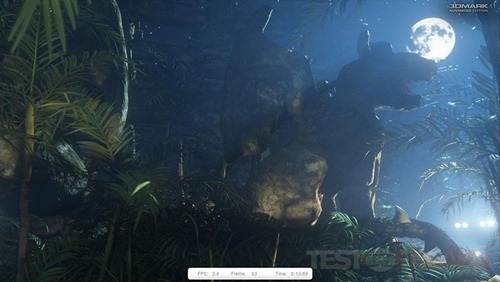 Then there’s the Physics Test, which is pretty self-explanatory. The graphics here are fairly basic, it’s just blocks falling after all. Then the final test is a combination graphics and physics test. 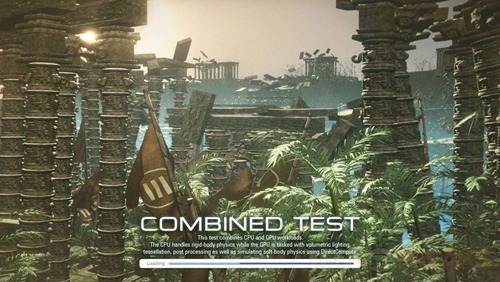 In the majority of the tests the graphics are beautiful, and they can be enjoyable to watch as long as your system can handle it.

When you’ve completed each test you’ll get a score of course, and there are different scores for each testing level that can’t be compared to each other. Here’s how my system did on all three settings: 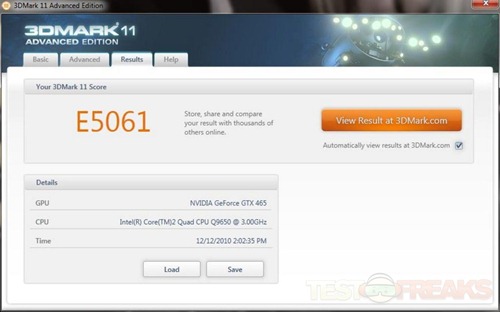 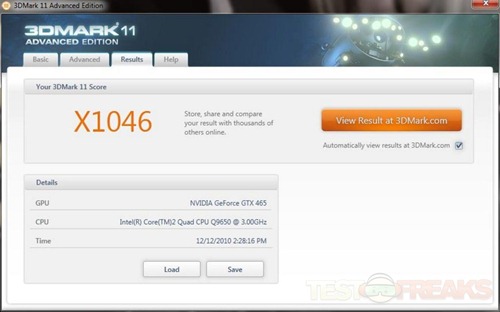 If you have it set to automatically view results you’ll be taken to a very big webpage with details about your system and the testing. I had to break the page into three sections or screen captures as it was so long. 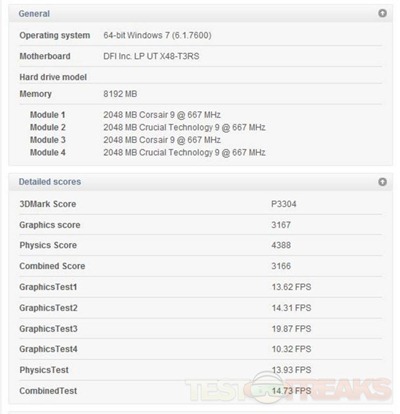 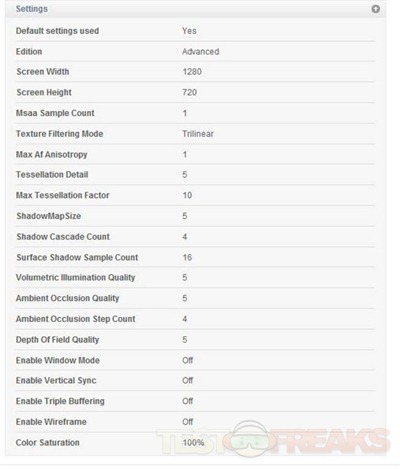 As you can see even on the Performance level my system didn’t do too good, I expected it to do much better really, at least in terms of the frame rates for the tests. My GTX465 and system combines usually do very well in most all games. Normally I run it paired with a GTX260 for Physics, so that adding that back in might improve scores, or it might not….

Conclusion:
For $20 you get the newest and greatest benchmarking software from the great Futuremark. You could also opt for the free version, but where’s the fun in that?!

Seriously though, 3DMark 11 will tax and test your system to make sure you’ve got the hardware to play the latest, greatest and upcoming games.

On the Extreme mode it will most likely crush any system out there today except for the most high end out there, and even then I don’t think they’ll do to well.

If you want to be sure your system can handle the games out there, then this is a quick and easy way to test it.

The program is very configurable so you can set it for your system. I also noticed that overall the benchmarks seem to take less time than the other versions of their tests, this should make some people happy.

Futuremark knows what they’re doing when it comes to benchmarking. The addition of the three levels Entry, Performance and Extreme defaults, can help you know what works best for your system.

The only small complaint I could have is the scenery isn’t quite like others in the 3Dmark series, those were more fantasy and sci-fi, with 3DMark 11 you get more of realistic locales. It’s not a big deal, but I actually like watching them, and so do my kids. Another small complaint, and it’s not the fault of Futuremark, is that no games look as good as these benchmarks and demos do sadly.

Pros:
+Configurable
+Very nice looking
+Online option to save and compare scores
+Simple and easy to use

Cons:
-Extreme settings will crush pretty much any system