Before we get into the rest of the review I wanted to show you the TN600 (right) and the TN900 (left) which I now have both of. They look virtually the same except for the lenses and then the temperature probe on the back. 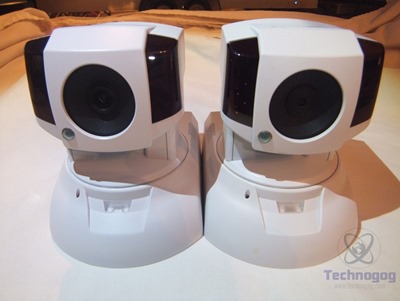 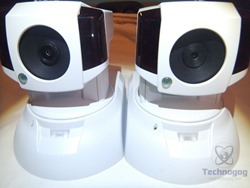 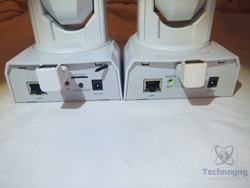 Here’s some sample photos taken at the 720p HD resolution, I tried to pick some colorful things to show the color.

Close up things are a bit fuzzy, details, like you really can’t read the small print on the lotion here. You can, you can make it out, at least I can, it’s just fuzzy that’s all. Here’s close and then a little farther away. The pictures are slightly grainy but overall I don’t think they’re that bad, good enough to make out faces clearly and see other details.

Here’s a farther away shot as well with my little bear USB drive: 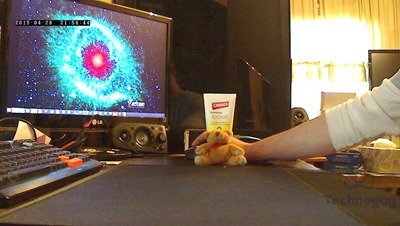 Here’s three colorful things and the camera does pick up the correct colors of them, that is what they look like in real life: 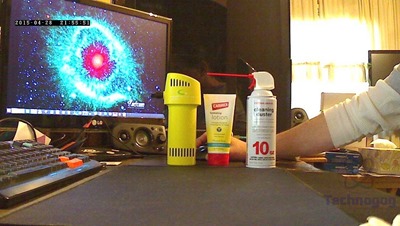 Here’s the same shot but taken with the LEDs on as they would be at night. The TN900 changes to black and white as most cameras will and the picture is still clear and you’re able to make out the writing and details. The night mode does have a slight purple tint to it, but again most camera do this when in night mode so it’s no surprise. 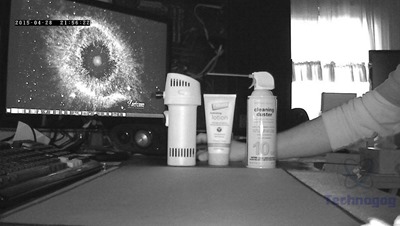 I’m using an Android phone so I’m using that version obviously of the C4Home app to connect to the TN900 camera. To connect the camera to C4Home you can do it manually by entering the IP address or you can search for it or you can scan the QR code that’s on the bottom of the camera. C4Home offers the ability to view up to four cameras at once and there are some basic settings you can adjust like buffer size and notifications.

In portrait mode you get a small live view with PTZ controls beneath. On the sides of the controls are buttons for Snapshot, Alarm and Speakers on the left and then on the right are buttons for talk, roam and back. The alarm button is interesting for sure, you hold it in and the camera makes an audible alarm sound like a police car sort of or an alarm system going off but it’s not very loud as the speaker inside of the camera is small. I mentioned earlier about the audio output on the back, you could add external speakers to make the volume nice and loud for the alarm and for speaking. 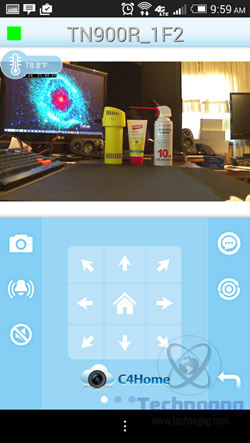 I love the fact you can talk through the camera. I’ve been using the TN600 for a while and it’s great to not only see what’s going on but talk through, like I’ll remind my kids to take the dogs out and it’s great to keep an eye on them and tell them to stop fighting or whatever they’re doing that they’re not supposed to be, the kids I mean of course.

In landscape mode you only see the timestamp and the temperature. The mobile view does offer a very clear picture so you can really see what’s going on and who’s doing what. 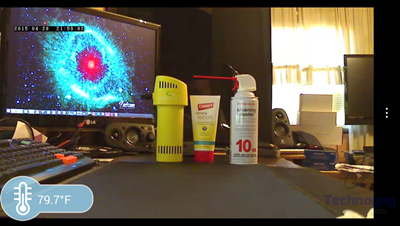 When you tap the screen the controls will appear on the sides. To move the camera in landscape mode you just swipe the screen left, right, up or down and any diagonal direction. 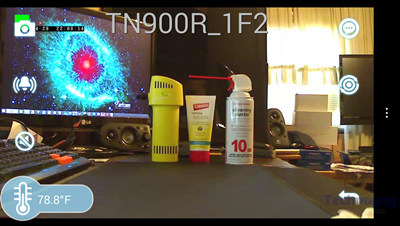 One note about the temperature probe is that it seems to be off by a few degrees. I have a thermometer on my desk I use for testing for the ambient room temperature and it’s different that what the TN900 reports. My thermometer is correct, I’ve compared it to others I have and it reports the same so I know it’s not that. I placed my thermometer next to the TN900 as close to the probe as I could get and the TN900 said 78.8F while my thermometer said 73.8F.  The TN900 is slightly warm to the touch when powered on but not hot at all, but I’m thinking that the warmth of the camera might be affecting the temperature probe, either that or the sensor is off by quit a bit. I could see being off by +/- 1 or 2 degrees, that would be acceptable, but not by five degrees, that’s just a bit too much in my opinion.

One of the new features of the TN900 camera is the ability to actually be a remote control for your devices at home like your HDTV or Sound System or whatever really that is infrared controlled. You can program the TN900 to turn it on and off, change channels, change the volume and many other functions. You will need to point the camera at the devices your controlling of course. I programmed it for my Vizio HDTV and for my Sony Soundbar sound system and it worked just fine for the functions I programed in like volume and power on and off.

The TN900 is a learning camera meaning that you point your remote at the camera and push the button you want it to learn and it learns that way. I’m not sure I like this way of doing things though as it can get tedious and I have to wonder why Compro didn’t come up with some sort of pre-programed system where you can pick the manufacturer and model of the device you want to control sort of like a universal remote has. I have the HTC One and it has an infrared port on it, you just need to select the device you want to control and it knows, Compro or C4Home could have done the same thing within the app itself instead of making you have to point the remote at the camera for every button press or function you want to control. 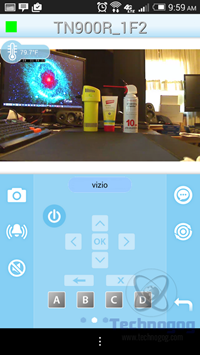 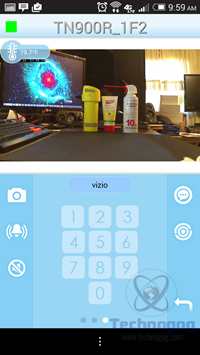 Controlling your stuff via the TN900 is certainly an interesting feature and I guess it could be useful. For example if you’re away for an extended period of time you can turn your TV on and off to simulate someone being home

To switch between the devices you just tap and hold the device name and a menu will pop up for you to switch to the other devices. 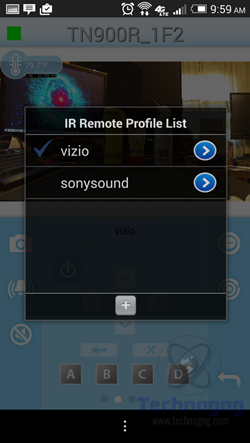 So you can control your devices right from your phone no matter where you are in the world, but you will have to use the C4Home app which is free.

The whole remote control thing is interesting and I guess useful, personally I’m not sure I’d use it, but it’s nice to be able to do, and it’s kind of fun to turn things off and on when people aren’t expecting it!

A quick note about storage, the TN900 can record to the microSD card, the cloud like Dropbox or even to FTP on your network or right to your computer.

The price is a bit on the high side, it’s a little over $300 right now on Amazon