For testing of course I installed it in a system and let is be used. This PSU was used for about a month to make sure it was stable and there were no issues, it’s still running fine now.

I installed it in one of my secondary system with a Core i5 750, an EVGA motherboard with a Sparkle GTX 465 video card that does require a bit of power with two PCIE power connectors on it. 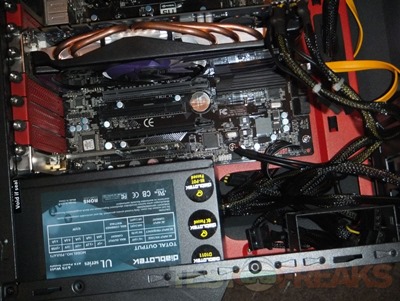 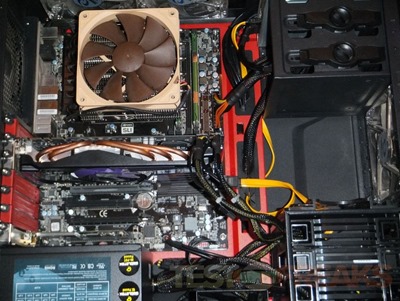 Not only did I test this PSU in real world situations where it was used for many hours at a time, I also ran the Aida64 benchmark on it that helps to stress the CPU and GPU.

The first test I ran was the CPU test, Aida does give us a nice graph but it’s rather hard to see. This test is just the CPU and memory basically.

Aida does output a text version as well with Minimum, Maximum and Average voltages recorded during testing.

During the CPU benchmark test the 5V line did drop below 5v but it’s well within specs for ATX power supplies, still though it dropped. The 3.3v lines dropped as well, but just slightly.

The next test I ran was the GPU test which stresses the system even more. This test is the CPU and GPU for maximum power usage.

Here we have similar results with all of the voltages dropping but the 12v lines dropped even in this test. So we see all three rails dropping under load.

Yes they dropped under load but they are within specs.

Power supplies have specific tolerances, you want the rails to be within certain tolerances and that’s about 5% plus or minus or 10% total.

Here’s what those tolerances would be for each rail:

Still I don’t like to see any power supply drop below what they’re supposed to be running at, so in my opinion it’s not exactly a good thing.

This power supply is quiet under load, that I can happily report to you, I noticed no real difference in noise level under load or not.