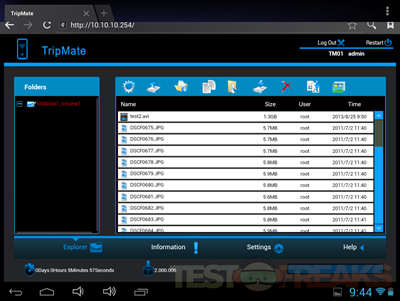 If you get stuck there is  a help section right there for you. 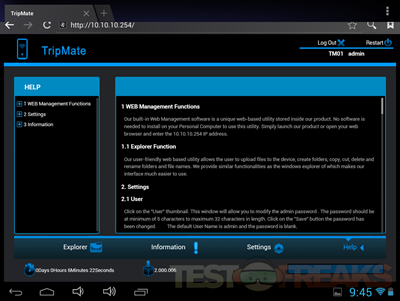 For the NAS testing part I tried two USB drives one formatted in NTFS and one in FAT32, basically because I was curious to see if it could read them or which is could read. I’m happy to say the HT-TM01 could read both file systems with no issues. 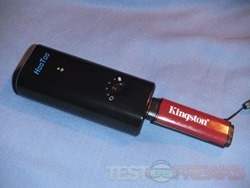 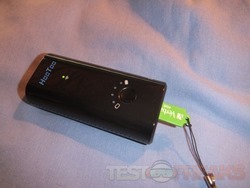 The device can be a NAS when it’s hooked up to a network via Ethernet or not, so it can just be sitting there with a USB drive sticking out of it and you can access it wirelessly. When it was wired on my network it did appear for me on my computer under my network as a USB disk and I could easily access to to read and transfer files. My computer is wired but if I had a wireless connection it would work the same way there as well.

I’m using Android and I tested it with my HTC One and my Idolian Mini Studio tablet. I went to the Play store and downloaded and installed the HooToo app called TripMate which is supposed to allow you to quickly and easily access the TM-M01 to transfers files to and from it along with viewing and streaming. I’ll be honest here, I tried for hours on both of my devices to get it to work and it just wouldn’t work.I tried everything I could possibly think of but it just wouldn’t find the device. Sometimes it would tell me that I needed to configure my internet connection but yet I know for a fact I was connected to the internet. Other times the app would just crash altogether on both devices. Other times it would say I had an internet connection but then it would say the folders were empty. I’m not sure what’s wrong with the app itself, I just know it didn’t work for me at all in terms of actually connecting to the HooToo HT-TM01. In the second picture below you can see it’s connected, other times that same box would be blank telling me to configure my connection. In the last picture below you can see the menu open and it sees the USB disk but it just won’t connect to it. 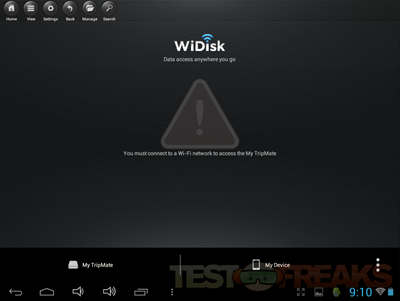 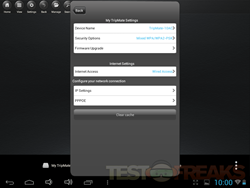 The app does let you access the storage on your tablet or phone as well, on the very bottom are two choices for My TripMate and My Device so you can switch between them.

There are workarounds, easy ones actually. I opened up ES File Explorer Android app and clicked on Network and then add new server and entered the IP address and I was ready to go. I could see everything that I had on my USB drives and I could access it as well, I could view photos, play videos and read text files with no problems using the ES File Explorer app. The app will show thumbnails but it just take a bit to load as you might expect. 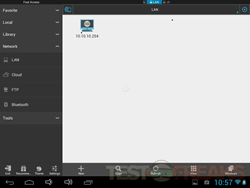 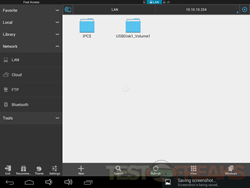 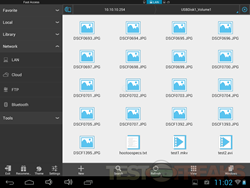 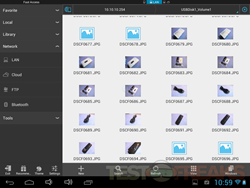 So the ‘official’ app didn’t work, but you can still use it as a NAS though. I use ES File Explorer most of the time anyway for any kind of file access so this works great for me as I then have everything altogether ready to be accessed. As I mentioned above, you can also access the files right through the router interface.

As you seen above as well, you don’t even need the app or any app for that matter when you’re on you computer as you can access it directly through your network neighborhood.

Streaming was fine and transfers were good. Transfer speeds will vary on the connection distance and the speeds of your storage device. I easily watched an HD movie with no skips or interruptions.

8 comments for “Review of HooToo TripMate HT-TM01 Wireless N150 Router, NAS and Power Bank All in One”