2011 seems to be the year that Solid State Drives (SSD) will move into the mainstream. Manufacturers are dropping the prices of this technology to help integrate them into more user systems. It has been well documented that SSD perform much faster than their mechanical platter driven brethren and other than adding memory to one’s computer the next best way to improve performance is the addition of a Solid State Drive.

Intel, well known for its CPUs also makes Solid State Drives and their X-25M drive is regarded as one of the most reliable and economical SSD’s on the market. This model has gone through a few revisions and the current one is aimed at the mainstream market. This version of the X25-M Mainstream is based on 34-nanometer (nm), multi-level cell (MLC) NAND flash technology and is aimed at mobile and desktop clients. It has advertised speeds of up to 250 MB/s on reads and up to 70 MB/s on writes.

At the current price points, SSDs are not about capacity but more about speed. Unless you wish to spend a lot of money on a larger capacity SSD most models should be used for running the operating system and leaving the data storage for a mechanical hard drive. To make this SSD more enticing Intel has dropped its SSD price making them even more competitive with other SSD brands.

The Intel X25-M MAINSTREAM comes packaged in a blue cardboard box with the model name and drive capacity printed on the front. The back shows an image of the drive along with some additional information in several languages. 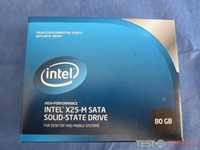 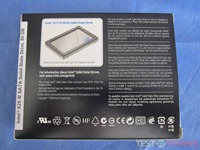 Inside the package we find the Intel X25-M Mainstream solid-state drive along with a pamphlet, CD with install and warranty instructions, a 3.5" drive adapter, two sets of screws and an Intel SSD sticker. Does your SSD rock? The Intel one does! 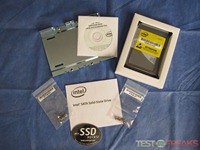 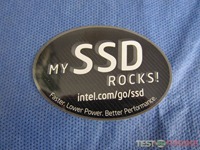 The drive comes protected in an anti-static bag. The X25-M Mainstream is silver with a surrounding black plastic border designed to make the drive the same size as a 2.5” hard drive.

Within this border is a label with the model and serial number along with drive capacity and firmware version. The back of the drive has the standard SATA and power connectors. 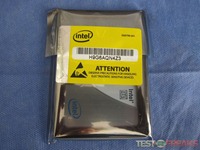 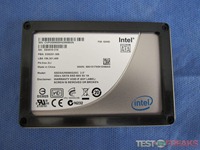 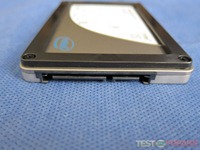 On the sides and bottom of the drive are screw holes for mounting the device. If installing the X25-M Mainstream into a desktop Intel provides a 3.5" adapter. 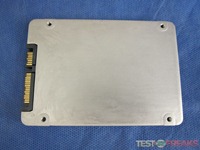 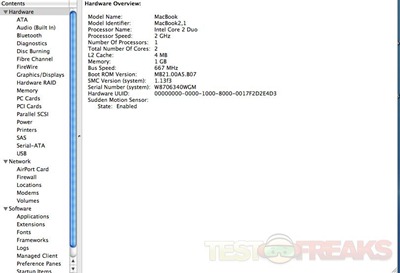 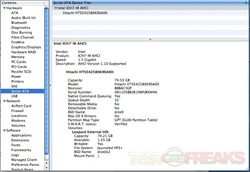 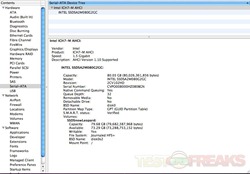 Both drives were formatted using the Apple Disk Utility and then a fresh installation of Snow Leopard (10.6.0) was performed off an install DVD. Subsequently the OS X 10.6.5 Combo Update and Software Update application was run and all available updates were installed.

Each of these installations was timed and we see six minutes shaved off the initial install and three minutes off the Combo Update and Software updates. 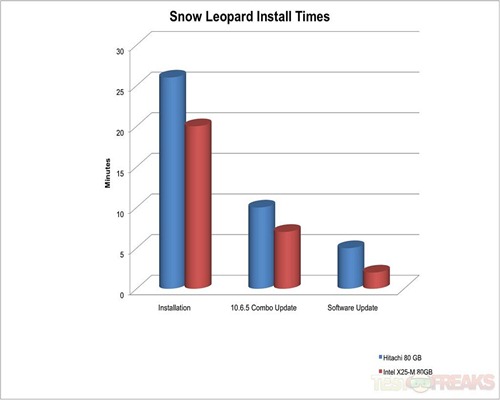 Next we timed the boot up and shut down times and took the average of five testings. Start up time went from 41.3 seconds using a mechanical hard drive to 18.1 seconds with the Intel SSD; while the shut down times were about a second or two different. 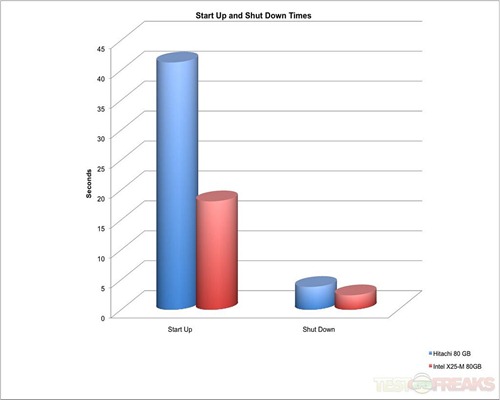 For comparison a MacBook Air (2010) had a boot up time of 10.8 seconds. This time disparity may have to do with the Serial ATA (1.5 Gb/s) found in the older MacBook.

Next the Mac benchmarking program X-Bench was used to test the Hitachi hard drive and Intel X25-M Mainstream SSD run MacBook. Switching to the SSD improved the system score from 111.03 to 170.21. Running X-Bench on the MacBook Air yielded a score of 163.66.

Looking at the Disk Test we see the Intel X-25-M’s advertised speeds were met on the writes in the 70s MB/sec but did not reach the 250 MB/sec on the reads which is most likely due to the lack of SATA 3 Gb/s interface on this older MacBook. Despite this fact we still see up to three fold improvements in read speeds with the Intel SSD.

In everyday use the addition of the Intel X25-M Mainstream 80GB to this now five year old MacBook made it feel like a more modern machine. Applications launched almost instantly. Safari booted in 3 seconds with the SSD compared to 9 seconds on the hard drive, Photoshop CS 4 launched in 11 seconds as opposed to 28 seconds.

Even with the meager 1 GB of RAM the MacBook felt like a new machine with the Intel X25-M Mainstream in place.

The main issue with using the X25-M Mainstream on a Mac is that Intel incorporates their garbage collection through TRIM, which OS X does not currently support. This means drive speed will degrade over time as more data is written to the SSD. This may require eventual SATA to USB dock for mounting the Intel X25-M and migrating the information over using

The Intel X25-M Mainstream 80GB is a competitively priced SSD that offers excellent performance. Aimed for mobile and desktop clients it can breathe new life into an older system or make a cutting edge machine even better. Currently Intel SSDs are optimized to work with Windows 7 machines that can take advantage of TRIM support. Hopefully in the future a firmware upgrade will allow garbage collection to occur at the firmware level or the next version of OS X will support TRIM.

Even with the lack of firmware level garbage collection the Intel X25-M Mainstream is still a great way to turbo charge one’s Mac. Optimally one would like to run just OS X on the SSD and keep the data on a mechanical hard drive but that is not always so simple on a MacBook or iMac as those machines were not readily designed to accommodate two hard drives.

Once you switch to using to using the Intel X25-M Mainstream 80GB as your OS drive on either Windows or OS X you’ll never want to go back to the world of mechanical hard drives again!