Installation is simple, just like installing any other 5.25” device and it depends on your computer case as to what you’ll have to do to get it installed. For me it was just sliding it in and using the screws to secure it in place and then hooking up the SATA data and power cables.

There is an LED over in the bottom right corner that lights up blue for power and then changes to purple for activity.  I have a drive in so the LED in the picture below is purple. 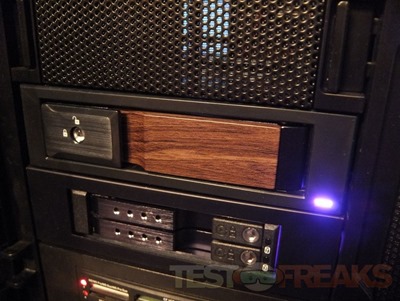 I used Atto and tested the drive on a direct SATA connection and then inside of the iStar dock and compared the differences in speeds. 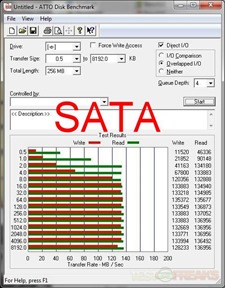 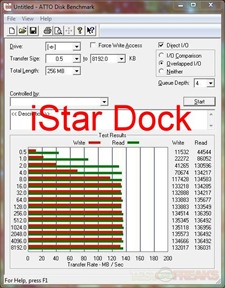 The testing results are virtually the same so the dock as no affect on the speed of the drive inside of it. It’s essentially the same as using a direct SATA connection.

So that’s it, very simple to use and it’s very handy.

You can use the keys or not, you don’t have to use them, they don’t serve any purpose other than to lock the bay.

I would have also liked the dock to come with a fan already. Yes the dock is aluminum and it should help pull the heat from the drive to keep it cool. I was using another drive and transferring close to a terabyte of data to it for backups and when I removed the drive I noticed it was very hot to the touch. I will be putting a fan in it as soon as I get the chance for sure.

The price is about $22 and for that it’s well worth it, but I didn’t find it that many places online as of yet. It is a new products so I’m sure it will be available more places in the future.