If you’ve been involved with computers for a while you’d know that all ram is not created equal.  If you consider yourself an enthusiast you owe it to yourself to use good quality ram from a reputable company. Kingston is one such company and their Hyper X line is the epitome of enthusiast performance and quality. Even if you aren’t an enthusiast though your system can surely benefit from high performance ram with great timings and fast speeds as virtually everything is dependent on it in one way or another. Today for review I’ve got a 4gb set of Kingston Hyper X  X2 Grey Series DDR3 ram and from my testing it’s not bad at all.

The Kingston Hyper X Grey comes in a plastic package with an identification label on it. 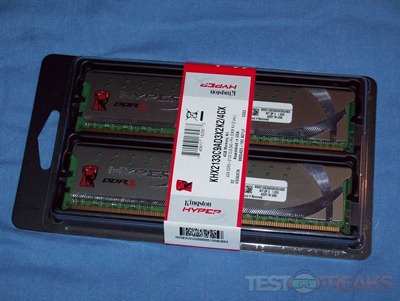 The sticks of ram use the new Genesis heatspreader, it’s gray in color and there’s holes for cooling. 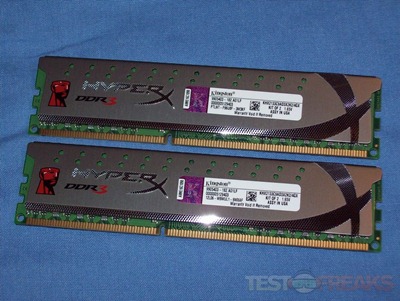 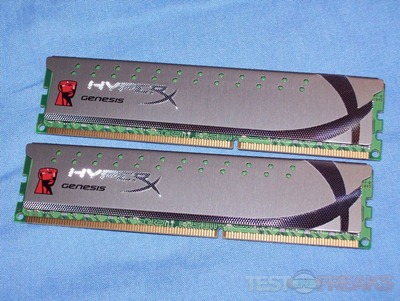 The ram does have an ID label on it as well giving you some basic specs. 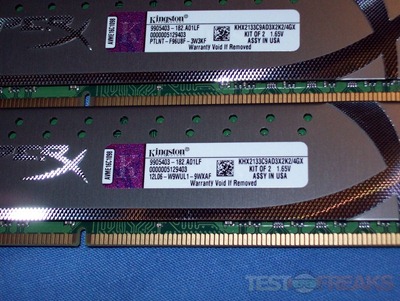 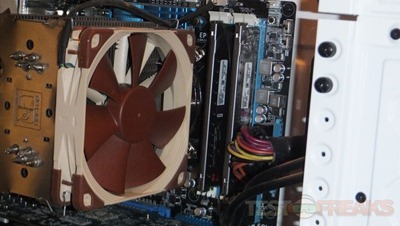 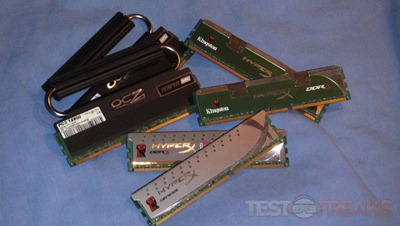 The LoVo normally runs at 2133Mhz but it just wouldn’t do it with this motherboard for some reason, but it happily ran at 1333Mhz, so I left it there. The OCZ Reaper is running at it rated 1600Mhz while the Hyper X Grey is running at its rated 2133Mhz speed. I think the speeds work for a good comparison, from low to high basically. In the charts below you’ll find them named Gray, LoVo and OCZ, which I think is self-explanatory.

When I first installed the ram it wasn’t running at its rated speeds or timings so I had to go into the BIOS and change things around. Not a big deal, been there done that before.

Once I got the ram setup it was time to run some tests.

We’ll start with a simple one, wPrime and I ran both tests for 32M and 1024M. It’s not really prime but it’s square roots.

wPrime is a leading multithreaded benchmark for x86 processors that tests your processor performance by calculating square roots with a recursive call of Newton’s method for estimating functions, with f(x)=x2-k, where k is the number we’re sqrting, until Sgn(f(x)/f'(x)) does not equal that of the previous iteration, starting with an estimation of k/2. It then uses an iterative calling of the estimation method a set amount of times to increase the accuracy of the results. It then confirms that n(k)2=k to ensure the calculation was correct. It repeats this for all numbers from 1 to the requested maximum. (learn more)

It’s a time based test so lower scores are better of course. 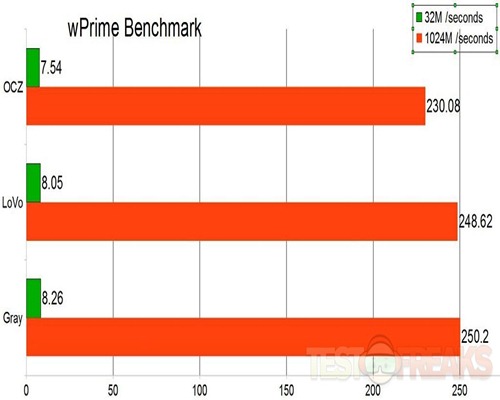 Surprisingly the OCZ running at 1600Mhz has the best time for this test, by almost 20 seconds for the 1024M test. The LoVo and the Grey are very close for both tests.

For the next test I used SiSoft Sandra and its Memory Bandwidth Test. 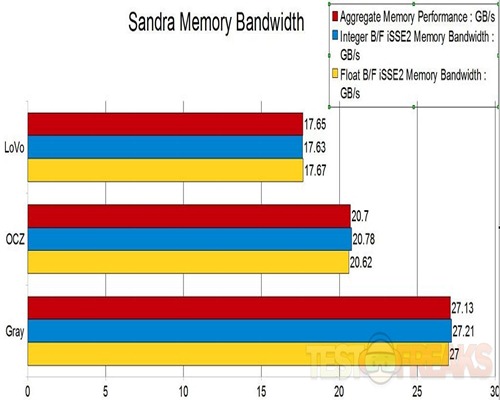 The Hyper X Gray runs at 2133Mhz so as expected it does very good in this test. Faster memory equals faster memory bandwidth and it’s a nice jump from 1600Mhz up to 2133Mhz.

x264 HD Benchmark is a benchmark that allows you to measure how fast your PC can encode a 1080p video clip into a high quality x264 video file. It allows for an easy comparison because everyone running it will use the same video clip and software. The x264 video encoder has a fairly accurate internal benchmark (in frames per second) for each pass of the video encode and it also uses multi-core processors very efficiently. All these factors make the x264 HD Benchmark an ideal tool in comparing the video encoding performance of different processors and systems.

No pretty graphs here, just raw data as I wasn’t sure how to put all of this in graph format and still make it readable.

No matter which ram is used, the results are virtually the same for them all. So speed of ram doesn’t do much to help here. The OCZ ekes ahead just slightly, but in real life you wouldn’t notice the difference most likely.

The next test I ran was actually several tests from AIDA64, the Memory Benchmarks for Copy, Read, Write and Latency.

Except for the Memory Latency test, the higher score means the better performance. 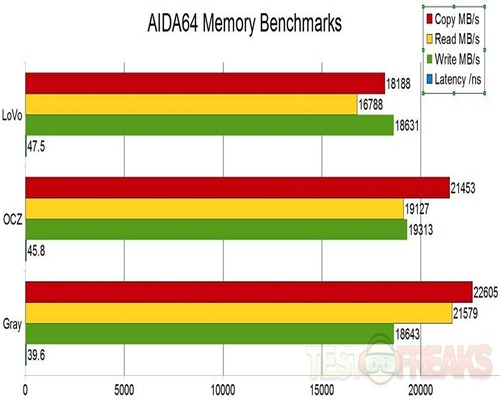 The Hyper X Grey did very well as expected, but it was slightly slower in the write test for some reason. Overall though it performed well.

The next text would be Cinebench 11.5:

Main Processor Performance (CPU)
The test scenario uses all of your system’s processing power to render a photorealistic 3D scene (from the viral “No Keyframes” animation by AixSponza). This scene makes use of various algorithms to stress all available processor cores.
In fact, CINEBENCH can measure systems with up to 64 processor threads. ThIS test scene contains approximately 2,000 objects which in turn contain more than 300,000 polygons in total, and uses sharp and blurred reflections, area lights, shadows, procedural shaders, antialiasing, and much more. The result is displayed in points (pts). The higher the number, the faster your processor.

Graphics Card Performance (OpenGL)
This procedure uses a complex 3D scene depicting a car chase (by renderbaron) which measures the performance of your graphics card in OpenGL mode. The performance depends on various factors, such as the GPU processor on your hardware, but also on the drivers used. The graphics card has to display a huge amount of geometry (nearly 1 million polygons) and textures, as well as a variety of effects, such as environments, bump maps, transparency, lighting and more to evaluate the performance across different disciplines and give a good average overview of the capabilities of your graphics hardware. The result given is measured in frames per second (fps). The higher the number, the faster your graphics card. 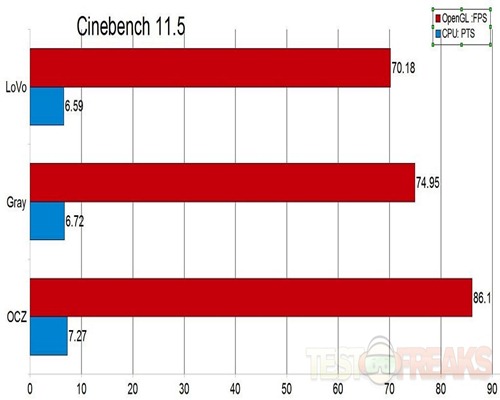 This test is interesting in that it really shows just how dependent your graphics card is on your ram and how it can affect its performance. I’m using the same video card but the 1600Mhz ram does better than the 2133Mhz Hyper X Grey for some reason.

The next test doesn’t need much of an explanation I think, it’s 3DMark Vantage. The settings is the default Performance but the resolution is changed to 1080p. 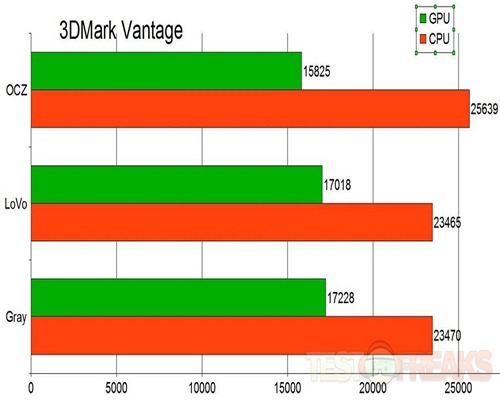 The results here are odd a bit in that the Gray does very well in the graphics test but falls to second place below the OCZ in the CPU test. Not sure what to say here really, but not bad either way I guess.

The last test is 3DMark 11 and I rant eh Extreme test default. 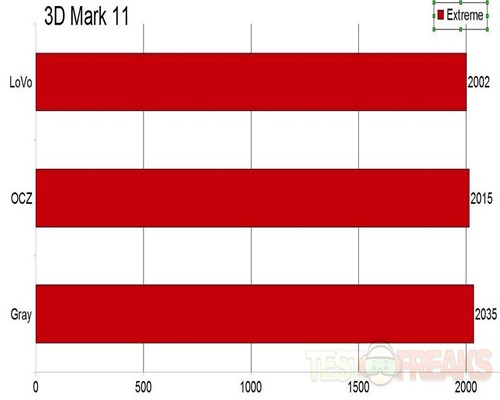 As expected the Gray dos well, but really all three do very good.

I didn’t do much overclocking as this ram is pretty much at it’s maximum it seems, I got a little bit more out of it but the performance difference was negligible really, not worth the effort it took. Like any ram though, this could be just this batch of ram, others could overclock much better or not at all.

Conclusion:
Ram is something you need to have in your system and the type of ram you want or need depends on what you do with it. Hyper X Ram is performance ram for enthusiast systems, but even general users can benefit from it. The Kingston Hyper X X2 Grey Series is a decent set of ram overall that performs well.

The tests were up and down for the Hyper X grey really, in some tests it performed very well and in others it didn’t, but it did come out on top for the majority of the tests.

So it’s a review of ram, there’s not much exciting with it, just a whole lot of tests to see how it performs and compares to other sets. I’m happy with the Hyper X Grey myself and I like the fact that it’s the short style of ram and doesn’t have the larger heatspreaders on it so it should work fine with any size CPU cooler.

Cons:
-Not much room for overclocking