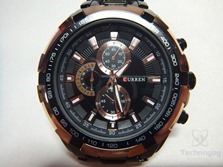 A lot of people don’t wear watches anymore, I’m one of them, I have my phone, there’s a clock in my car, there’s a clock on my computer, don’t really need a watch anymore. Still though, watches can be useful, and they can be a fashion statement, and they can just be handy at telling time. Today for review I’ve got a very nice looking watch from a company called Recalls, the watch is stainless steel, it’s the analog style, and it’s even waterproof. The watch is very nice looking, it’s also rugged and sturdy, it would be fine for daily wear or maybe even a night out on the town. Read on to learn more… 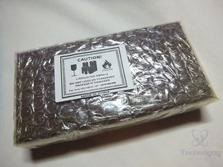 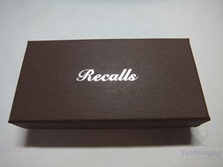 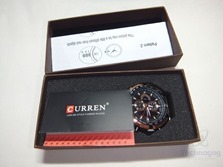 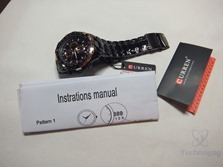 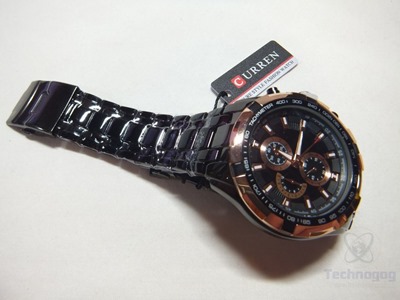 The watch is colored black and it’s almost a rose gold but maybe closer to a light bronze in color for accents. The watch face doesn’t have numbers just lines for the hour marking, the minute and hour hands are the gold color with white in the centers of them that will glow in the dark. The second hand is very thin and it’s also the gold color but it has red at the tip so you can see it better. There are three dials behind the hands but these are non-functional and are just for decoration sadly. There are three buttons on the right side of the watch but only the middle one actually works to set the time, the other two are for decoration only. Overall the watch looks very nice, I was truly impressed when I first got it, it’s heavy and it seems very well made, and it is most certainly a man’s watch. 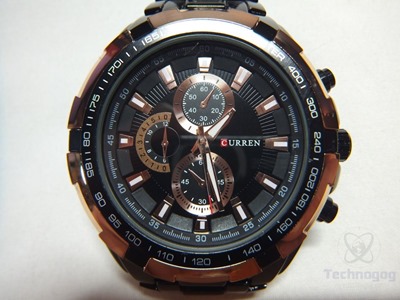 The watch band is made of stainless steel and it’s the link style where you could remove one or more to get the proper fit. The band does lock very firmly, you have to press two buttons to unlock it and open it by flipping open the clasp, so it has two locks really. The band is very sturdy and it’s black colored, a very shiny black actually. 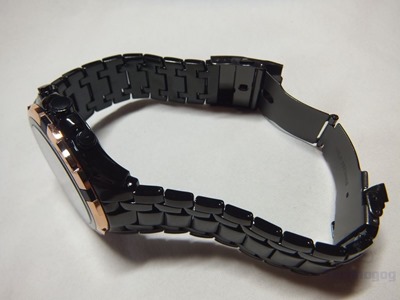 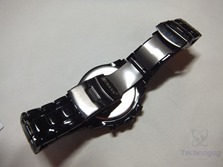 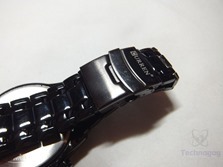 The watch is very thick, almost half inch and the bottom is stainless steel and it has informative markings like the battery style and Curren logo. The watch is water proof up to 30 meters or about 98 feet, but you can’t pull out the side button when under water, not that you would need to I would think. 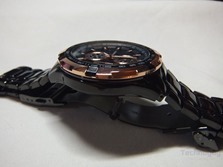 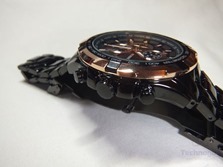 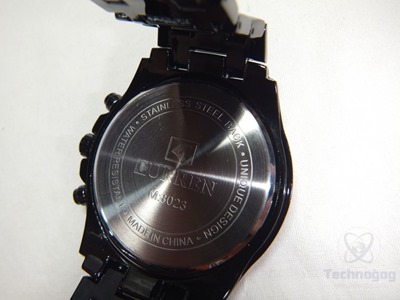 The first thing you’ll notice when you put this watch on your wrist is the weight of it, it’s very heavy. The specs says it’s 153 grams or about 5.4 ounces, which if you think about it is quite heavy for a watch. I rarely wear watches so it took quite a bit to get accustomed to wearing it and of course I had to size it to fit me. The weight of the watch will let you know you’re wearing it for sure. The watch is nice, many people have said it looks very nice and were impressed by the looks of it and really surprised when I told them the price, they couldn’t believe it was so inexpensive. I had no issues with the clasp coming undone and it seems to keep time just fine, I set it to my computer and the time is still the same two weeks later, so far, so good there. 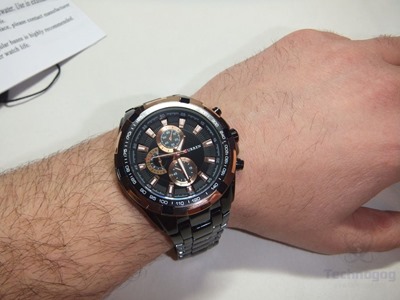 For the price I don’t think you’ll find a better quality and better looking watch, right now it’s $15.99 on Amazon and for that price it’s a steal really.

The watch would be perfect except for the fake dials and fake buttons which just annoy me honestly. I would have happily paid a bit more money for the dials and buttons to be functional as the rest of the watch is just gorgeous and it’s well made .

As is the watch would be fine for daily wear surely, it seems sturdy and I like that it’s waterproof.

Cons:
-The three dials are fake