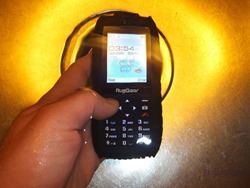 Not everybody needs or even wants a smartphone, sure they’re nice but it’s not exactly something you’d take camping or on an outdoor adventure with you or even something you’d use if you have a rough type of job like construction etc. RugGear has sent me over the Mariner Plus RG128 phone for review which is a rugged style phone that’s not only waterproof but it floats so if you drop it in the water you won’t lose it. The phone doesn’t have a touchscreen as it’s a basic or feature phone as they’re called and it’s meant for the outdoors, it would be great to take camping and hiking to keep in touch or for emergencies. The phone has two sim card slots and a microSD slot for storage and even a built-in flashlight to help light the way. All in all it’s a decent phone and yes it really is waterproof, I tested it underwater and it floats and you could even makes calls and take pictures underwater. Read on to learn more… 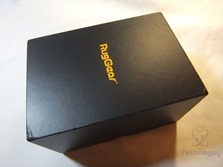 Once you get everything unpacked you’ll find the phone, user guide, microUSB cable, headphones with extra sponge style covers, the battery and USB charger. They sent me the European version of the charger by mistake, but it’s not a big deal as the phone charges over USB so you can charge right from your computer if you wanted to or use anything other USB wall style adapter.  The battery isn’t the largest capacity at 650mAh but it’s not a smartphone so it doesn’t really need lots of power. The battery should provide about 4.5 hours of talk time and about 400 hours at standby which I think is fine for this type of phone really. 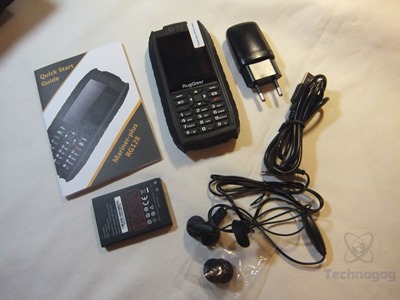 The RG128 comes with a screen protector preinstalled for you and you just need to remove the cover by pulling on the tab. The phone is black in color with rubberized sides for grip and shock resistance and it really does look like a rugged type phone. The RG128 feels well made overall but it’s lightweight coming in at slightly over 4 ounces or about 117 grams. The phone is small enough to easily fit in your pocket or bag at about 130.2 X 62.2 X 17.7mm or about 5.1 x 2.4 x 0.7 inches in dimensions. 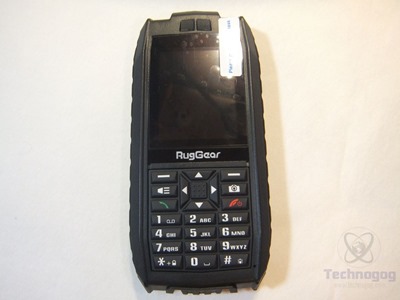 The keypad is blow the screen and it’s mostly standard but you will find dedicated camera and flashlight keys. Navigating the phone is done with four arrow keys and then a selection button in the center, answering calls is done with the green phone key and you end calls and turn the phone on and off with the red phone key. The keys themselves are rubberized and sealed to keep the elements out and they’re comfortable to use as they have an almost soft touch or feel to them. There are two dash or line buttons at the top that correspond to actions on the screen when the phone is on. 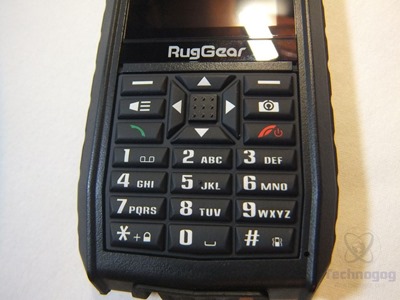 On the bottom edge of the phone is a rubber door that opens up to reveal the microUSB port for charging the phone. 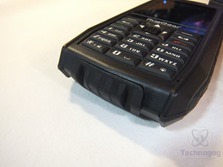 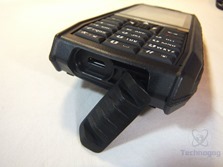 On the top of the phone is another rubber door that flips open to reveal the 3.5mm audio jack and here also is a white LED to be used as a flashlight. I really like the idea of the built-in flashlight especially for a phone that’s meant to be used outdoors. The LED is more than bright enough to help looks for your keys or find something in your backpack in the dark. 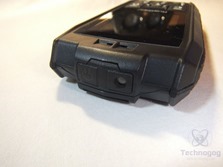 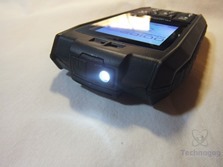 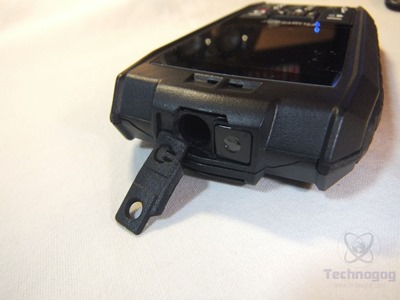 The back of the back of the phone is battery compartment which is held secure by two screws to keep the water and elements out. Towards the top on the back is the .3mp camera and then at the bottom is the external speaker for music and even calls. The speaker is actually decent, it can get very loud and it’s clear. The screws are big enough that you can use a coin to turn them, you could use a fingernail but I wouldn’t as you most likely won’t be able to get them back tight enough to fully secure the back to keep water out. 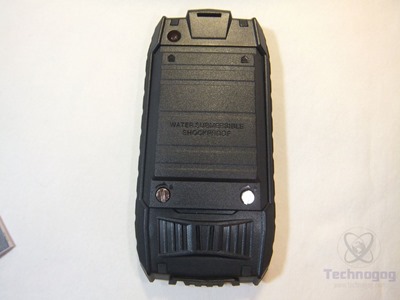 Once you remove the back cover you’ll find a wide rubber gasket on the phone itself and then a thin one on the door, these keep the water and the elements out. Inside you’ll find two sim card slots and the microSD card slot. You put your sim card in and microSD card in and then put the battery on top of that so you won’t be swapping out the microSD card once it’s in place. The phone uses standard sized sim cards but I used my nano sim with an adapter just fine, but used a standard sized sim card as well later and then I even tried both at the same time. 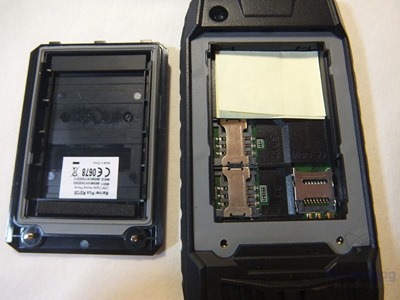 The screen is small at 2.2 inches and the resolution is only 176×220 pixels but it doesn’t look too bad and you can customize the background wallpaper but just adding a picture to the microSD card. The main screen just displays basic info like time and network along with battery capacity and signal strength and the profile you have enabled. At the bottom of the screen is two choices for Menu and Names and these are above the two dash buttons on the keypad so you can select them. The screen is clear and you can read it fine even in bright light. 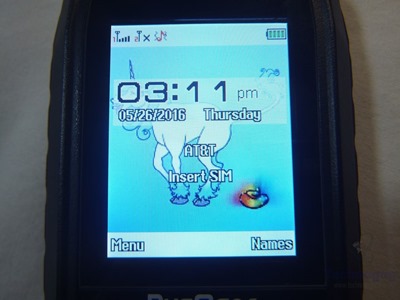 The phone’s main menu is a 3×4 grid with twelve icons on it for phonebook, messages, call log, settings, multimedia, file manager, extras, sound profiles, games, organizer, Bluetooth and internet. The phone does have very basic and limited internet capabilities but I should note I did not use this function as the guy at the AT&T store couldn’t figure out how to enable it and also because my wife, who will be using the phone, really doesn’t care about having the internet on her phone. You can enable internet but it does require a bit of research or a better knowledgeable customer service rep to help you. 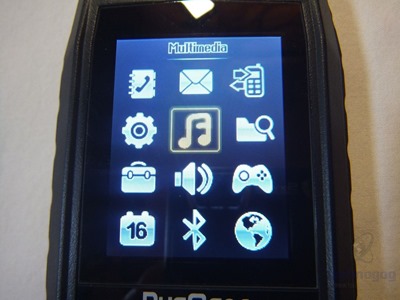 You can send and receive text messages of course and change profiles. They’ve also included a calendar, tasks, alarm, world clock, calculator and even an ebook reader. The phone does have Bluetooth 2.1 capability so you can wirelessly listen to music and make calls. 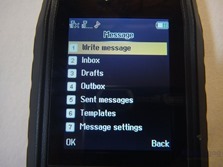 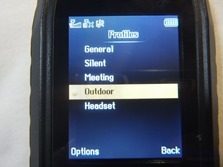 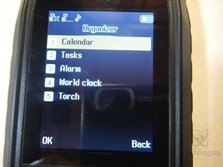 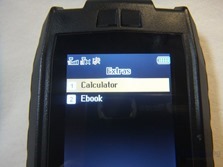 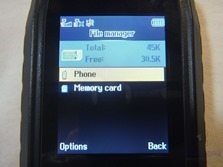 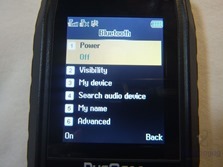 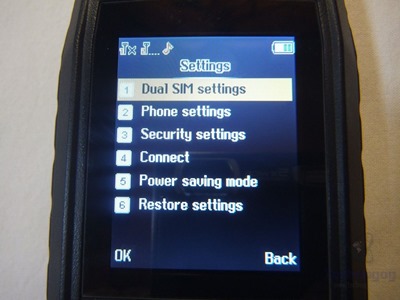 The multimedia functions of the RG128 surprised me, you can play music yes but you can also play videos and it even has a sound recorder and an FM radio built-in. The FM radio is like others in phones where it only works with the headphones plugged in as they act as the antenna. 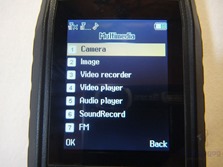 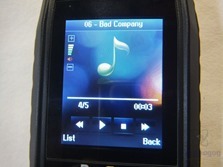 There’s not much in the way of games, only Panda and Puzzle come installed but I guess they’re fine to pass the time if need be. You can install other games but they have to be Java based and I didn’t bother with it as I didn’t see a need really. 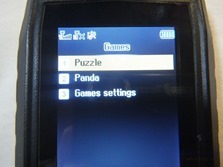 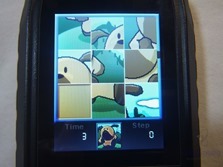 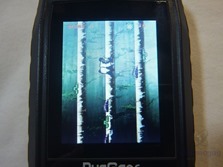 The camera is just .3mp so you’re not going to get high quality pictures like those you’d find on today’s smartphones but it works. The interface is basic but you can zoom via digital and change some basic settings. Picture quality is about what you would expect at .3mp, grainy and bit fuzzy, in lowlight you have to be very still or the pictures will be blurry but in bright light they’re not too bad overall. 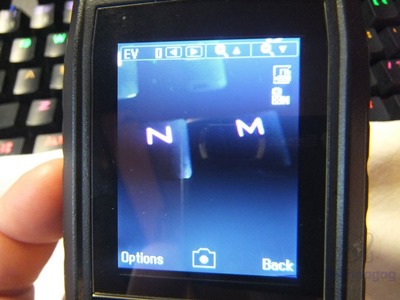 Here’s two sample pictures for you of my mouse and keyboard: 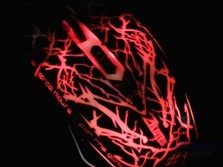 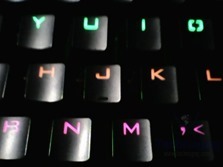 I had to test the floating and waterproof ability of the phone so I filled my kitchen sink with water and tried that way.

Here’s a video of me testing it in the water:

So as far as testing the phone, I’m on AT&T so that’s what I used the RG128 with. First I tested it myself with my sim card and then I went and got a new sim card for my wife as I added her to my phone plan. I should note this phone is for my wife as she does not like smartphones, does not like touchscreens at all and she wanted just a basic feature phone but wanted something rugged and durable.

Call quality is decent overall, calls are clear and I really had no issues making and receiving calls. The same for text messages, no issues there. Signal was spotty at times though but it was from interference from other devices it seems. My wife is a nurse and where she was there were lots of machines on and running and she noticed she wasn’t getting calls all the time and when she did it was spotty with garbled audio but as soon as she left the vicinity of the machines everything was perfectly clear and fine. This phone is meant to be used outdoors of course so I don’t see the issues she ran across being a problem really but it just needed to be noted here for sure.

The external speaker is very loud, she and I could hear the phone ringing in her bag but she did mention that she wished the actual in call volume could be a bit louder.

I’m very much accustomed to smartphones so going back to using a feature phone was interesting but it was also a bit refreshing and sort of liberating as there wasn’t all that other stuff going on, I made and took calls and that was really it, but after all this time I don’t think I could totally stop using my smartphone though. I can see from an objective point where the RG128 could be useful though. Many years ago I worked construction and had a smartphone but also kept an inexpensive flip phone as well that I would take to work with me since I could just switch the sim cards, it was nice to be in contact as needed and not worry about breaking my expensive smartphone.

The RugGear RG128 could be a great second phone to take with you to work or on a weekend camping or hiking trip, or it could just be your main phone if you have no need or desire for a smartphone.

The RG128 really is waterproof and it really floats, it’s rugged too, but yet I does have plenty of other basic features that you can use in your daily life. Once of the first things I do when I get a phone is buy a rugged style case for it, with the RG128 I didn’t need o do that as it just doesn’t need a case at all really. The RG128 is well made and it’s durable and should able to survive most anything you throw at it or throw it in.

Aesthetically the RG128 is not a pretty phone, it’s a rugged phone that’s not meant to be fashionable and I don’t mind the looks really, in fact I like it a lot.

All in all I really like the RG128, call quality is decent and so is battery life and it does what it’s supposed to do.

Cons:
-Camera not great
-Devices / machines can interfere with signal
-In call volume could be louder