Keeping with the “Back to School” motif this week, today we will look at another case for the iPad Air. Keeping one’s expensive Apple tablet should be a priority whether you use one at school, work or home. Urban Armor Gear is a company whose name implies protection, have released their version of an iPad Air case.

The Urban Armor Gear iPad Air Case is designed to protect the tablet from various hazards including impacts and splashes. It was created to meet drop-test standards (MIL STD 810G 516.6) meaning the iPad Air should survive most impacts unscathed.

My current case of choice is the Speck DuraFolio, which also meets military, drop-test standards. Today let’s see if the Urban Armor Gear iPad Air Case can take its place as my go to case.

On the back is a description of the product’s features in four languages. 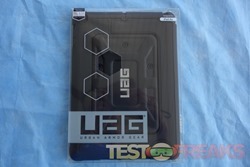 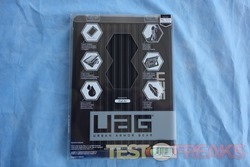 Opening the package we find just the case. It comes in one color – black and definitely has an armor like appearance. The Urban Armor Gear iPad Air Case has a composite design with a hard external shell and soft impact resistant core. 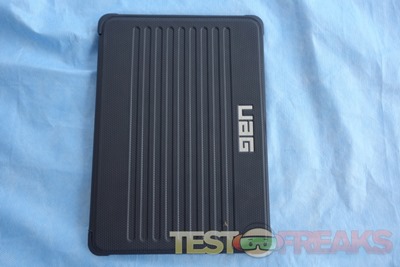 The front of the case has tiny honeycomb texture and nine horizontal groove along with the Urban Armor Gear (UAG) logo in silver. 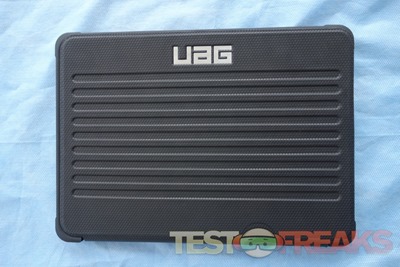 Looking at the back of the case we find another UAG logo this time in the center with a design that definitely makes the case look military in origin. Six Allen screws surround the center UAG logo. Around this pattern is a section of case that separates from the rear to provide stand functionality. 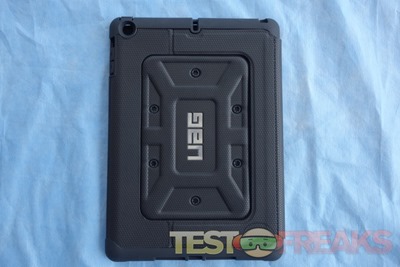 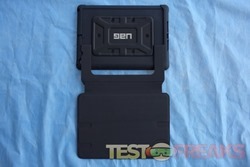 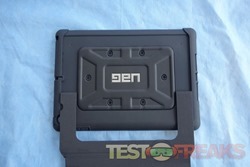 Also found on the back are openings for the camera and microphone. The sides of the case have rubberized covers for the volume and power buttons and openings for the mute switch, headphone jack, Lightning connector and speakers. 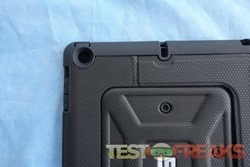 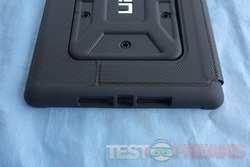 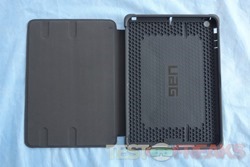 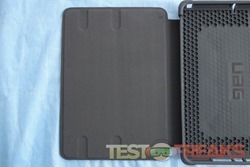 The cradle portion of the case is composed of larger rubbery honeycombs with several punched out ones on the periphery and a square of solid ones in the center with a UAG logo in the middle. These honeycombs are designed to disperse the impact of a fall while provide cushion and decreasing the weight of the case. 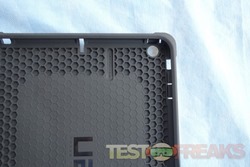 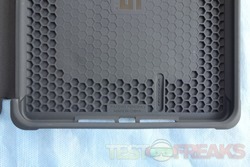 A rubbery bezel lines the top, right side bottom and left upper and lower corner of the cradle.

Installing the Urban Armor Gear iPad Air Case involves sliding the iPad Air right side of the case and then pressing it down around the rubbery bezel. To removes the iPad Air simply pull one of the left corner bezels down and peel the cradle off the Apple tablet. 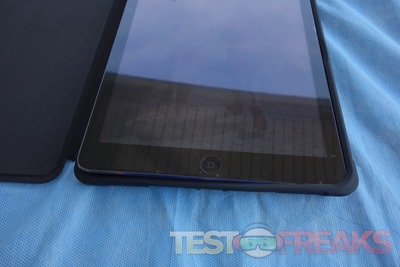 If you are using a screen protector be aware that the Urban Armor Gear iPad Air Case will most likely pull it off at several points on the iPad Air as it occurred to me. 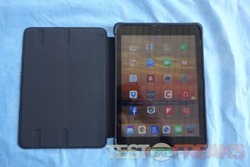 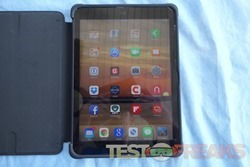 The front bezel keeps the screen of the tablet from directly touch a flat surface. Of course dropping the case with the cover open onto the screen is not advisable, as the case will not offer protection with that scenario.

Overall the case is fairly lightweight but it still does add bulk and heft to the otherwise feather light iPad Air. This gain in bulk and weight is worth it, as this case seems to be designed to withstand most any impact.

The rubberized grip makes the case feel secure in the user’s hands and also provide some water resistance. The honeycomb texture of the cradle provides additional impact absorption.

All of the controls and buttons were easily accessible while the Urban Armor Gear iPad Air Case was in place. 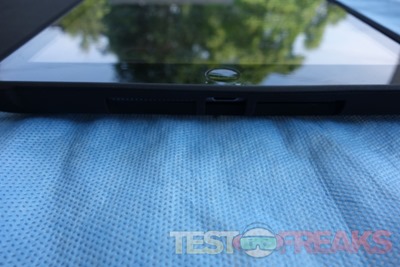 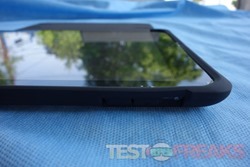 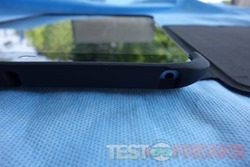 The Urban Armor Gear iPad Air Case only seems to have two stand positions and does not seem to offer a typing angle orientation. It does have Smart Cover capability, which is always a plus in an iPad case. 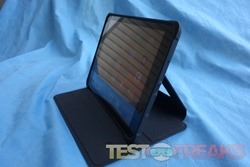 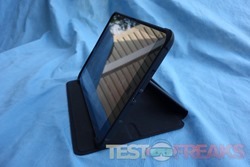 Compared to the Speck DuraFolio, the Urban Armor Gear iPad Air Case is a bigger and bulkier case. This is most noticeable when folding the cover back for one handed use of the iPad Air.

Urban Armor Gear have certainly created a case that is on par with the OtterBox class of protection. The Urban Armor Gear iPad Air Case is built to withstand the highest level of trauma with (MIL STD 810G 516.6) military drop-test certification. It’s rubbery material provides excellent grip-ability and offers water resistance from splashes.

It includes Smart Cover capability, which is a favorite feature of mine in an iPad case. Although it did not replace the Speck DuraFolio as my case of choice, I do recommend the Urban Armor Gear iPad Air Case for those looking for a durable functional protective case.