Buying a video card can be a tricky thing. There are so many on the market made by so many brands, it is very difficult to know which card is truly the best for your needs. Many cards are so similar to others that it can make the decision overwhelming. Add to that the fact that new cards are constantly being developed, making graphics devices one of the quickest computer components to become outdated. Most likely, the card you choose will already be outdated, unless you intend to spend hundreds of dollars on the current best thing.

For most of us, a mid-level graphics card at a reasonable price will suit our needs just fine. There is some comfort in knowing that not very long ago, a card that now runs for $150 would have been the best on the market. At the same time, it shows the quick pace by which video cards develop and turn over.

Today I have to review a Zotac GeForce 9800 GT 512MB 256-bit GDDR3 Video Card AMP Edition. Zotac is currently producing dozens and dozens of cards, from the GeForce 5 series through the 200 series. This particular card was chosen for a machine that I’d call a “casual everything” computer. By that, I mean that the machine running it occasionally does some video production, some gaming, some photo editing, and the like. However, it doesn’t do enough that it needs the world’s best card. It’s also not your grandma Betty’s solitaire and email machine.

Note that this is the AMP! Edition of Zotac’s GeForce 9800 GT, which means it is the overclocked edition. Zotac is all about selling cards pushed beyond the stock frequencies.

The Zotac GeForce 9800 GT comes in a nice box, covered with specs and info. On a retail shelf, it would be a really solid presentation and tell anyone who knows their specs a good bit about what’s inside. 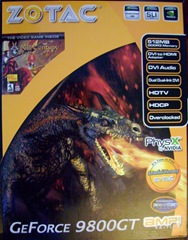 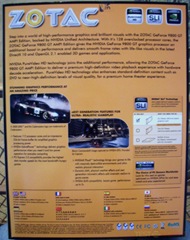 Here is an awesomely enthusiastic video of the unboxing:

Inside the box you receive the card itself, a software install disc, user manual, HDTV cable, power cable, S/PDIF cable, and VGA/D-sub and DVI/HDMI adapters. There is some other literature as well, but who needs all that? Zotac seems to be big on extra promotions, and my particular box also included 3DMark Vantage Advanced software and a game – XIII Century: Death or Glory. That should be everything you need to hook up whatever display hardware you use, and a nice couple of extras. Those two bundled pieces of software may not be packaged with the card forever, but lots of Zotac cards do come with extras.

Of course, you also get the required Zotac nerd sticker to put on your case if you so desire. I did, because I’m that cool. 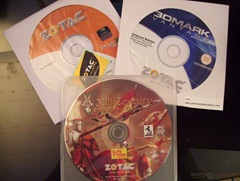 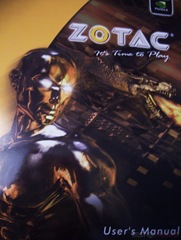 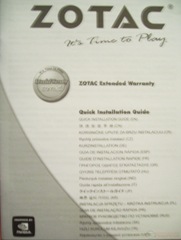 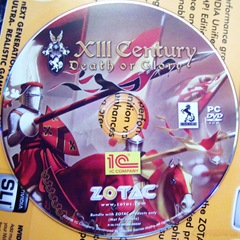 The card only requires one PCI power connector, which is on the far end. The heatsink is black and it has a very bright orange light on the fan, which comes in handy as all my other lights on the case which it will be put into are orange. The PCB is also orange. Dual link DVI ports that output up to 2560×1600 with HDMI via an adapter are on the back as well, flanking that is the SLI connector and SPDIF audio connector for HDMI sound. 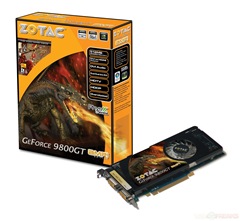 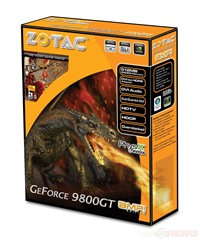 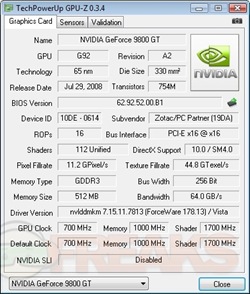 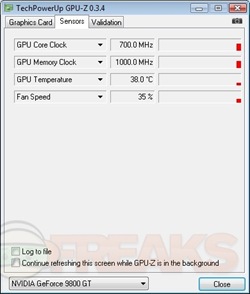 Price – Currently around $110, frequently offered with a mail-in rebate of at least $20.

The card is big, but not overly big. Most cards are rather large these days, and there are ones bigger than this for sure. If you haven’t replaced your video card in a good while, it will almost definitely be bigger than what you are removing, so take that into consideration. The case I was installing it into is mid-sized tower, the size of your standard every day consumer case. The length is somewhere around 9-10” and I had to shift a few things around inside to get it to fit. This is definitely the minimum size tower for this card.

A very quick look at the card in the case pre-boot:

In this particular machine, this was the first card install, as this card replaced on-board mobo graphics that were utterly horrible. The hard drive, in its current position, made it impossible to plug any power into the graphics card, so it had to be moved. Following that, the RAM was popped out before the video card was installed, as the northbridge cooler makes it tough for your fingers to get to the locking tabs with anything else installed near the card. Then, some power cables had to be re-routed to reach the video card. I had to take apart about half of the computer in order to fit this thing in. Again, that’s more a product of trying to cram it into a case just big enough to support it, and really doesn’t have anything to do with the card itself. You should, however, be made aware of its size and requirements. 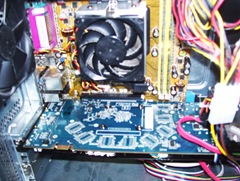 Please excuse the craptacular quality of a few of those pictures.

So truly, installation was pretty basic, and would be a snap with proper space. Literally. Snap it into place, plug in the cables. It required a 6-pin PCIE power connection, but just a single one, so that’s all you need to have free to power this bad boy. In my machine, it is running fine off a simple 300 watt supply.

The GeForce 9800 GT is really the same card with identical specifications as the GeForce 8800 GT, which is why Zotac created this AMP! Edition to produce some higher clocks. This card uses a slim single-slot heatsink, common for Nvidia, though bigger than the one used for the 8800GT series. It does boast a pretty big fan and fan opening for quiet cooling, which it needs when under load, particularly in tighter cases. (During this writing, the card is running at 38C, or 100F). The tail end is designed with contours to open up air flow, and the rear allows air intake.

This card has Purevideo HD and Hybrid Power, which its predecessor does not. Hybrid Power enabled motherboards allow you to power down the card completely and use a lesser power consuming card when not using it, and kick it back up when using a 3D application.

The card doesn’t pull the entire amount of power it could utilize from the PCIE, which is awesome if you have a lower output power supply. The device is relatively quiet and efficient at cooling itself. After some usage, the heatsink definitely gets louder, but that’s just what you expect. You certainly wouldn’t call it noisy.

The look of the card in the case is fine. It faces downward, so you look at the back of it. The orange light illuminates the inside of the case pretty well.

I’ll throw a few benchmark tests at you, as well as some simple prose information. I find comparison charts hideously boring and so we’ll take a look at the basics. My PC is experiencing some inconvenient other hardware issues that are causing it to shut down any time I run standard benchmark tests, which saves you from looking at nine pages of charts. So we’re using some common info on a card running in a common computer. Here are some numbers to start us off… 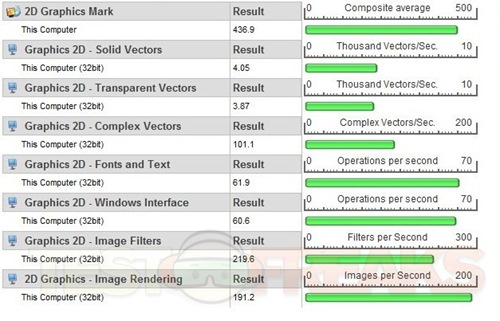 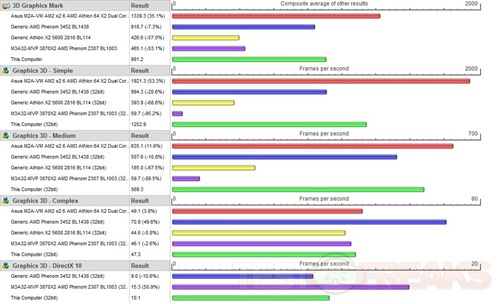 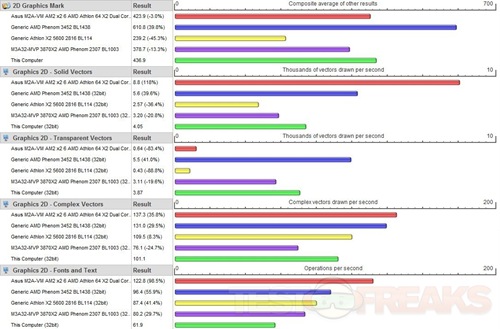 As we’ve mentioned, the machine running this card is nothing to write home about. Just your average computer. Here is how video rendering using the 9800GT AMP! And this machine stacks up against some others:

Overclocking the card is a little tricky, as it already is overclocked. It’s feasible to hit around a 10% overclock and you should see that difference in the 3DMark benchmarks, though it is relatively miniscule. If it’s something you just have to do to feel like the boss, go for it.

None of the stats will absolutely blow you away when compared to other cards or this card’s previous model. They do show an improvement over the past model, and for the price, it’s solid.

Running Second Life with all render values as high as they can be, I’m pulling in an average of 40FPS. Every standard PC game I own is running just swell. It is capable of running anything; the bigger variable when it comes to modern games is the power of the rest of your machine.

The card offers great performance for the price. It holds its own against cards of comparable prices and performs as expected, while being quiet and power efficient. The difference between a standard GTX model and an overclocked GT are minimal, aside from the vast price difference that isn’t worth it. This card is just dandy for its price range. These days, anything that requires only one power connection is a double plus. Save yourself some power, save yourself some money, get some free bundled software and a mail-in rebate. For less than $100 after all is said and done, this card delivers at the level it should.

Being factory overclocked is a huge plus, and gives you performance that would have cost you quadruple the amount a year ago. Performance is still great, running all modern games at beautiful resolutions with no problem. Those with standard video needs should find this card sufficient and budget friendly.

Straight up, if you’re looking for a decent card good enough to get through some average load uses at a cheap price, pick this one up. 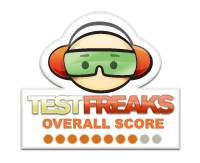 Cons:
-Will be physically large for some cases
-Can’t compare to higher level cards, despite the bang for its buck
-Sits with its pretty parts facing the bottom of your case