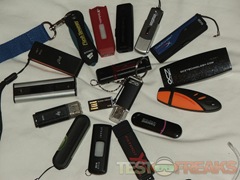 Yep, I’m at it again, this time I’ve got an assortment of 16gb USB drives, 17 of them in total from many different companies. I went and did a bit of searching and collected some of the more popular drives out there today, along with many others as well. I think we’ve got a nice representative sampling overall, we’ve got Sandisk, Verbatim, PQI, Kingston, OCZ, Patriot, Ridata, Imation, HP, Adata,Corsair, Memorex, Super Talent, PNY and Transcend in this little roundup. 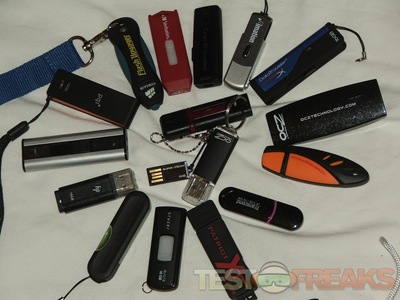 and just for your information my system basically consists of:

Ok, now onto the testing phase.

In the following graph the higher scores are better, I’ve arranged the chart from worst to best according to how SiSoft Sandra scored them: 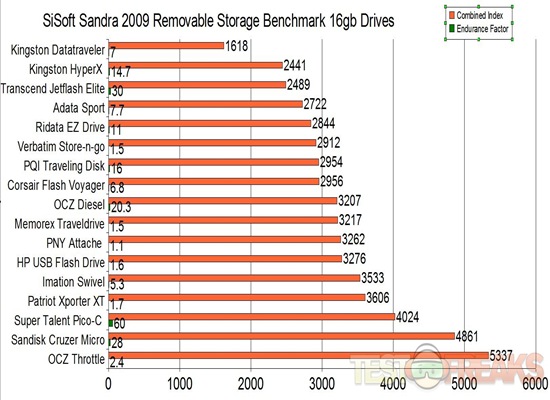 The top five as we see according to SiSoft Sandra are OCZ, Sandisk, Super talent, Patriot and Imation.

Here’s a closer look at the test, specifically the 256MB Files test, here we can see how Sandra scored the Read Performance and Write Performance of the drives. The chart is arranged using the Write Performance as the reference, worst to best, and of course higher is better. 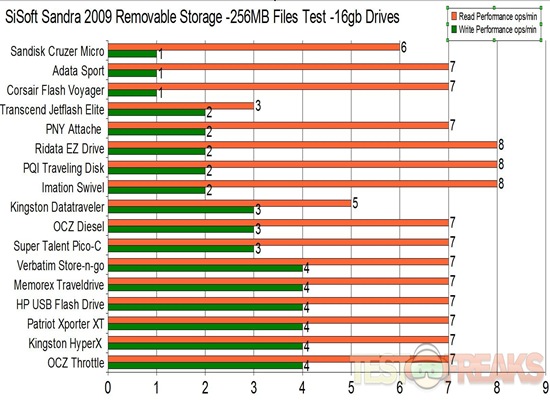 As we can see we’ve basically got six drives tied for first place in this test.

Now, I’ve got Diskbench test up next, but I’ve done it a bit different this time, since there’s quite a few it gets a bit crowded, so I’ve broken the individual tests down into separate graphs. Also I added another test in here as well, I figured since these were 16gb drives, I would thrown in a nice large file transfer test as well, I used the Windows7 ISO file weighing in at 3.15GB. I also used the same 350MB .AVI Video file that I always use as well.

Diskbench is nice in that it tells us the actual times and transfer rates to complete the tasks of Copy To or Write To the USB drives, Read From and Copy From as well. I run these three tests on my USB drives because they are the most common things people are going to be doing with their USB drives.

First up is testing with the 350MB .AVI Video file, lower scores are better as they are shown in seconds. The first test is for Copy To or Write To the USB drives. 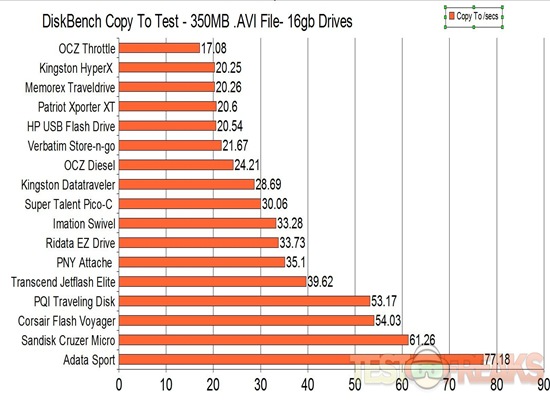 As you can see the OCZ Throttle drive has the fastest write time for this size of file, coming in three seconds faster than the closest competitor. The other fast drives all come it at around 20 seconds to complete the task which is very good overall. We can also see the Adata and Sandisk drives are over one minute, not that good really.

Next test is Read From, this test simulates reading a file from the USB drive, again it’s in seconds so lower is better. 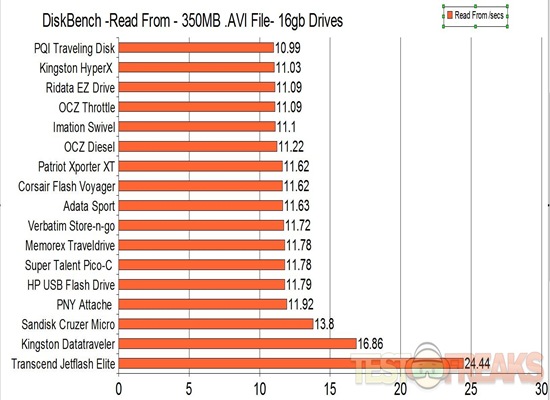 Here we see a bit of rearranging going on with the ordering, with the top drives coming in at around 11 seconds.

Next test is the Copy From test, this gives us the time it takes to copy from the USB drive to my hard drive. 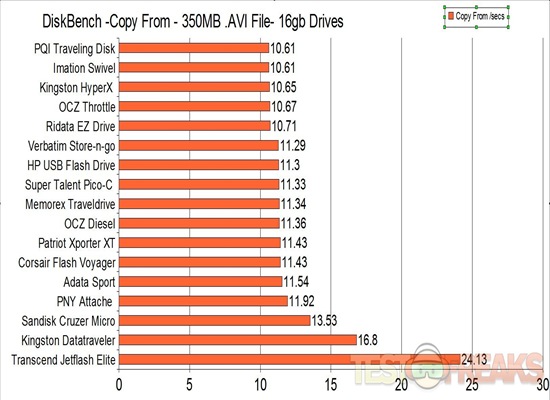 The ordering here is close to the Read From test but not the same, still though the PQI drive is number one.

Now here are the transfer rates for the tests in MB/s, so higher scores are better or meaning faster.

First graph is showing the results for the Copy To or Write test: 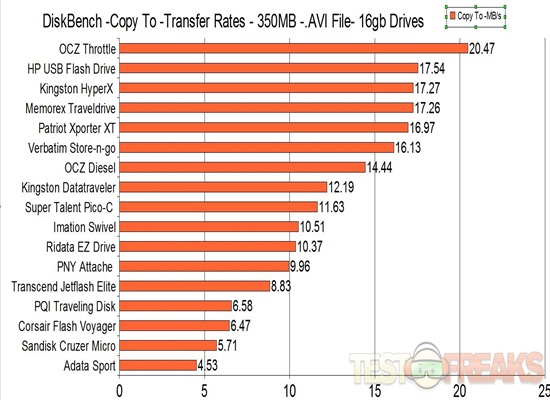 Clearly the OCZ Throttle is a fast drive coming in almost a full 3MB/s faster than the nearest competitor. Though 16 and 17 MB/s isn’t bad at all either, it’s nice and fast.

Next graph is Transfer Rates for the Read From test, higher is better of course: 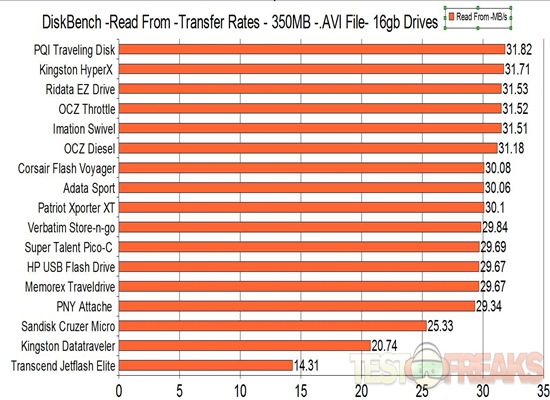 Over 30 MB/s is good, very good actually for a USB drive, and we see quite a few hit 30 and above in this test.

Finally we have the Transfer Rates for Copy From: 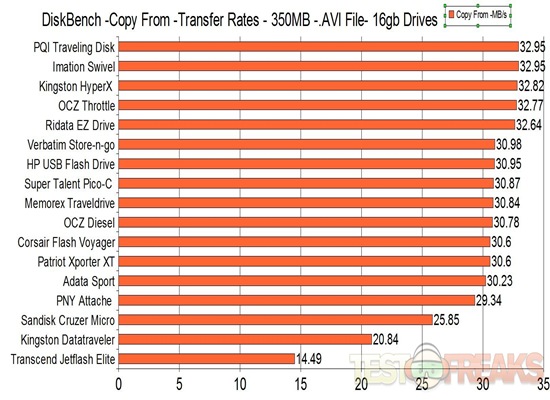 Again over 30 MB/s is good, hitting 32 MB/s and above is even better as we  can see a few are able to accomplish, most of the drives though aren’t too bad in this area really.

Ok, now for the last set of tests using Diskbench, this is where I used the ISO file that is 3.15GB in size. Same tests here, Copy To, Copy From and Read From, but I decided to only show you the times it takes, and not the transfer rates as they are pretty much the same as the other test, but seeing the actual time to do something can sometimes tell us more than seeing the transfer rates, at least I would rather see the times to do something, it’s easier to understand.

First up again is Copy To or Write to the USB drives, lower scores or times are better. 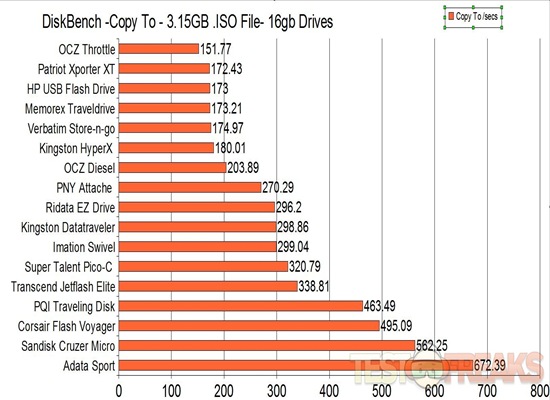 Over two minutes to copy the file to the USB drive for all of them, with the OCZ Throttle coming is number one here again, with a good 20 seconds better time. The main reason I wanted to show this is that things change with file sizes, the ordering of the drives has changed with the larger file as opposed to the smaller file transfer. Some drives got better when transferring the larger file, while others performed worse.  The Patriot drive got worse, while the HP drive got better, the Kingston HyperX got worse, and so did the Verbatim drive. The PNY drive was actually in 12th place on the 350MB file test, here we see it moved up a few spots to number eight on the list.

Next is the Read From test: 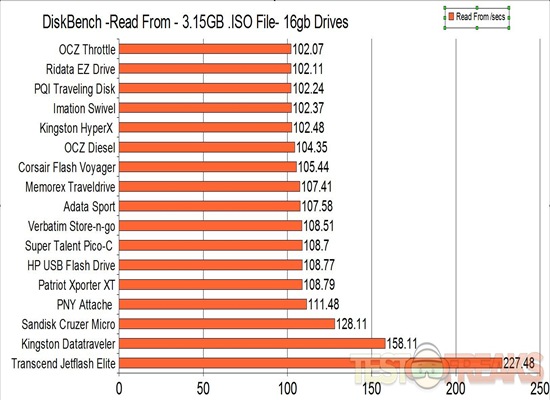 Again the OCZ Throttle drive is number one, still the top five drives are all very close in performance for this test. Again the ordering has changed from the 350MB file test.

and finally here’s the results for the Copy From test: 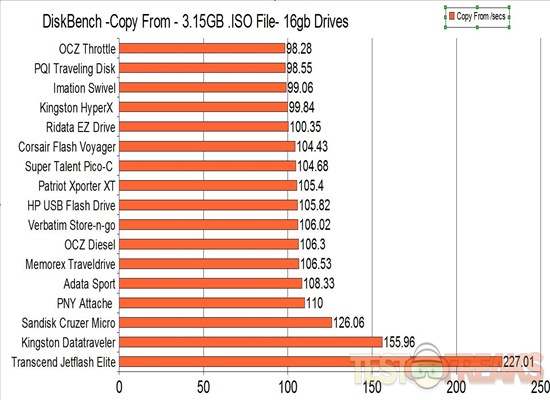 and yet again the OCZ Throttle drive is in the top spot, and one thing has remained the same for all of the tests I think, the worst is still the worst no matter how you look at it… anyone want a Transcend drive?….

Seriously though, if I had a choice of these drives it would be the OCZ Throttle, but then again it might not be. Yes it’s the fastest of the bunch, but it’s a hybrid drive, it’s got both eSATA and USB connections on it, and to use the USB connection you need to carry a small USB cable with you with mini-USB connector to plug into the Throttle, to me that’s a bit of a hassle really. The next choice would be tied between the Kingston HyperX and the Patriot Exporter XT drive, both are fairly fast and both have good qualities in their construction as well. Then again why would I bother with 16gb drives when I’ve got 32gb and 64gb ones on hand?

If I’m looking for a USB drive, the first thing I look at is the Copy To or Write speeds, this is what is most important to me, the next thing would be the Copy From speeds, as for me what I do most is put data on it, then take it off, reading from the drive is not that important to me really. So it all depends on what your priorities are concerning USB drives, the results are here, you can judge for yourself which is best for you.

If I had to give an ordering for the top three drives, taking everything here into account ,including my preferences, it would have to be the OCZ Throttle coming in first with the Kingston HyperX in second, the Patriot Xporter in third. Those are the ones that I would buy personally.

I hope you enjoyed this, I had fun doing it, I’ve got an even larger one in the works as well, but it’s going to be a bit different, so be on the look out for that within the next couple weeks.