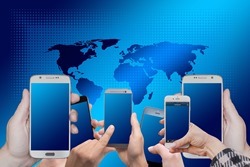 Smartphones have been around for more than a decade by now. In the pre-iPhone era, they looked a lot like traditional handsets, hiding advanced features like a file system and its likes under their hood. The handheld devices that looked like today’s smartphones were referred to as PDAs, and they were far more similar to computers than smartphones are today. All this until Apple gave them a new meaning – that of being an entertainment hub that fits in our pockets. From then on, the vast majority of smartphones were made by the same template – they look like a bar of chocolate, with a huge screen and little to no physical buttons, known as “slate”. This design has proven to be pretty successful to date – but could it change in the coming years? Let’s meet the smartphone of the future today with some innovative and attractive designs.

Last year, Chinese international tech company Lenovo unveiled its first bendable smartphone, the CPlus – and it presented a prototype of the device, too, at Lenovo Tech World. Creating a foldable, bendable smartphone is something many designers and manufacturers have tried to do in the past but this was the first time people could actually lay their hands on one in real life. The segmented smartphone comes with a 4.26″ display, and runs Android – this is about as much as there is to be known of the device at this point. No word on the potential release date of the phone has been announced yet.

Another groundbreaking handset, this time only rumored: Samsung’s Galaxy X foldable smartphone. According to reports, the phone has been in the works for the better part of the 2010s. Apparently, no true progress has been made on the matter so far, even though a Samsung executive has been quoted saying that the South Korean manufacturer intended to release a bendable phone by 2014. Samsung did, indeed, make progress with its display technology in the last couple of years. It has presented its first roll-out screen at SID 2016, and its transparent OLED displays have been around for even longer. There’s no way to know whether – and in what form – they will make it to the world of smartphones at this time. The only source we can rely on is the rumor mill – which is not the most reliable one. But things are happening in the background, that’s for sure.

Even though Google has shelved Project Ara, and LG has given up on its dream to deliver a popular modular phone, the idea itself still lives on. Lenovo seems to still be dedicated to the idea – its Moto Z series has accessories – Moto Mods – that can be attached to the phone’s back in a fashion similar to cases. The list of Moto Mods available includes a Hasselblad True Zoom camera, JBL SoundBoost speakers or Incipio’s Offgrid Power Pack. While the phone is not exactly a cheap one, and the Mods are also quite pricey, the idea itself is great – and we might see more of it in the future. Another handset sporting a similar idea is Essential Phone. Currently, the handset is only available in the US and comes with just two accessories – a 360-degree camera attachment and a charging dock accessory. As a niche product that it is, it is also quite pricey (it costs $878 complete with the camera accessory).