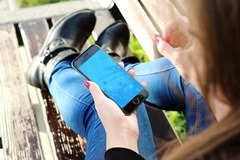 What are the different types of mobile applications? Today, we will be discussing the native, web, and hybrid apps.

What is a Native App?

Native apps are downloaded from the Apple or Google Play Store, which are written in the native language, AKA, C-sharp, Java, Objective C, or swift. With native apps, the software lives on the native device. It has full access to the platform’s APIs. Native apps also have incredible performance. Furthermore, the source code only works on the targeted platform.

Pros of a Native App

3. The app icon is available on the device

4. You can receive push notifications

5. It runs inside the operating system

Cons of a Native App

1. Developers need to know each of the platforms languages

2. The source code only works on the targeted platform (windows, iOS, and Android all need their own unique code).

3. It’s slower to market due to multiple source codes

How Does a Native App Work?

The developers will write the source code and add resource files such as images and audio. Then, when they are ready to submit to the app or play store, they will need to compile and package their application. iOS packages are in IPA, while Android’s packages are in APK. Once it’s compiled and packaged, the apps will be submitted to the app or Google Play Store.

What is a Web App?

It’s a website designed for mobile and often tries to mimic the native design. It’s written in HTML, CSS, and JavaScript. A network connection is a requirement for it to work.

Pros of a Web App

Cons of a Web App

3. A network connection is needed

4. Web apps are not available on the app store

7. Lives in the browser

How Does a Web App Work?

It’s a single source code made with a responsive web design, which includes HTML, CSS, and JavaScript. By using Chrome or Safari, the mobile device will request a website from the server. Then, the server will respond with a mobile-optimized website. The major benefit to web apps is if there is a bug, it can be fixed on the server-side and be deployed immediately.

What is a Hybrid App?

A hybrid app has a native layer with embedded HTML. It has basic access to the native APIs. It has availability on the app stores, and the web portions can be updated on the server-side.

4. Web portions can be updated quickly

5. Available on all app stores

Cons of a Hybrid App

1. Dependent on middleware such as PhoneGap

2. Middleware could be slower to update

4. Some bug fixes require the middleware updates themselves

5. Some bug fixes you can’t control

How Does it Work?

Hybrid apps are written in HTML, CSS, and JavaScript. They have a single codebase. A middleware layer sits between the app and the platforms. Then, the hybrid code uses the middleware APIs rather than the native application APIs. The middle will then translate their APIs into the native platform APIs. This means you can write one set of source code and then translate and run on iOS, Android, and Windows. However, don’t be fooled by this because hybrid apps are typically very buggy, slow, and provide poor user experiences.

There are numerous differences between each app you may choose to go with. However, there are benefits to each. Therefore, when deciding on the application, consider your individual needs, such as cost, time, and performance. If you’re interested in creating an app, visit this top mobile app development company.

← What is Gaming Lag and Why Does it Happen?
3 Sports Technology is Transforming Forever →