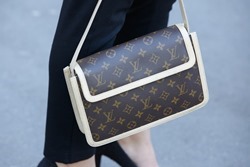 The fashion travel designer label is all about the much sought-after LV Logo and has played a huge role in pop culture around the globe. The world of hip-hop has referenced the French design house often, and Kanye West has name-dropped the opulent brand countless times in rap. For example, in West’s 2005 “Golddigger” hit, he included these famous lyrics:

“Cutie the bomb, met her at a beauty salon/With a baby Louis Vuitton under her underarm.”

There have always been mentions of luxe labels in music, but the decade of the 2000s has seen LV’s domination. To have a piece of the LV collection is an instant status upgrade to the max.

“That Louis Burger never be the same/A Louis belt will never ease that pain.”

There Was A Real Louis Vuitton

The precious LV brand did have humble roots. Louis Vuitton was born in the mountainous region of Eastern France to working-class parents. His mother died when he was 10, and young Vuitton did not get along with his new “wicked” stepmother, so he ran away from home at 13 to the bright, exciting lights of the city. He later took a job as an apprentice at a box-making company and became an expert at his craft.

Louis Vuitton launched his luggage empire in Paris and opened his first store in 1854, says Architectural Digest in their article about the hidden history of Louis Vuitton.

Vuitton was skilled at making trunks out of canvas rather than the typical leather material because they were waterproof and quite durable. People fell in love with the quality and intelligence of the trunks’ designs for railroad and steamship travel. However, the iconic logo of LV would not come about for another 42 years.

After his passing in 1896, the Louis Vuitton fashion travel brand began putting out the first monogrammed canvasses. His son Georges Vuitton was the brainchild behind establishing the interlocking L and V monogram to pay homage to his late father. That unforgettable print has stood the test of time and features the “LV” with diamond, circle and flower shapes on a dark brown background.

Because of its mega-star international popularity, the Louis Vuitton designer label has often become a target of thieves looking to make a fast buck off of the brand’s handsome luggage, trunks, bags, shoes, watches, jewelry and fashion accessories.

Counterfeit LV products seem to pop up everywhere these days as people look for stylish ways to show off their so-called financial status with a knockoff bag. If it looks like a Louis Vuitton at a distance, then, it might also fool unsophisticated fashionistas up close and personal.

The LV monogram is the first place to check for a counterfeit bag, say the experts at Heritage Auctions. There is no way the fake bags can achieve the incredible and genuine color of the famous canvas monogram print and its proper saturation.

Another dead giveaway can often be detected in the balance of the monogram print. In other words, a fake Louis Vuitton bag might feature a tilting of the LV letters and design symbols.

Morphing A Most Recognizable Mark

American designer Marc Jacobs was the creative director of Louis Vuitton for 16 years, taking over the helm in 1997 and adding women’s and men’s LV ready-to-wear collections. In fact, he tried to embellish the famous logo of some of LV products by trying to think outside the box to develop a modern touch.

In 2001, Jacobs introduced a limited-edition line of bags featuring “Louis Vuitton” written in graffiti over the monogram pattern. That style effort was created in collaboration with designer Stephen Sprouse. The monogram graffiti collection was re-released again in 2009.

These bags have also become victim to thieves who recreate the satchels and shoulder bags in fake materials.

French fashion designer Nicolas Ghesquière has been the creative director of the House of Louis Vuitton since 2013. Ghesquière is a French national who lives in Paris. He, too, has been playing around with or tweaking the famous LV monogram and introduced some bags with large LV hardware. Ghesquiere has also added a classic black canvas with a red monogram that has won fans over.

Luis Vuitton will always remain one of the global premium brands, but the designer travel label has slowly been returning to its exclusive luxury status rather than becoming an “accessible” luxury label.

About two-thirds of LV products all bear the iconic LV monogram, according to a report in the LuxurySociety.com website. The company is headed back towards higher-end pieces that include sumptuous and expensive leather goods and exotic skins. Louis Vuitton is trying to avoid over-saturation of its brand and the dilution of its iconic status.

Louis Vuitton not only desires to stay relevant but continue to collect momentum as a brand more than a century old and one that was well-established far before the digital age.