I still remember when Dead Space came out, it became on of my favorite games and I didn’t stop playing until I finished it. Today Dead Space 2 has come out and I don’t have it for review, but the day is young so maybe it might magically appear on my doorstep?! Here’s hoping right!

The psychological thrill of deep space rises to an electrifying new level as Visceral Games™, a studio of Electronic Arts Inc. (NASDAQ:ERTS), today announced the internationally-acclaimed action horror game Dead Space™ 2 is now available at retail stores in North America and on January 28 in Europe. This highly-anticipated sequel has been heralded as one of the top games of 2011 by New York Times’ Seth Schiesel and has received 25 scores of 90+ from top gaming outlets such as Official Xbox Magazine, Playstation: The Official Magazine and Game Informer. PlayStation: The Official Magazine said that “’Dead Space 2’ surpasses the original in every capacity,” while IGN calls it “a new gold standard” and Game Informer declares the game “a monster of a sequel, offering bigger scares and more excitement.” 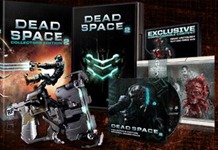 “’Dead Space 2’ surpasses the original in every capacity”

“After years of anticipation we’re thrilled to unveil the next series of events in the Dead Space universe,” said Steve Papoutsis, Executive Producer at Visceral Games. “In creating Dead Space 2, we listened very closely to the community’s feedback and created a deeper, more intriguing, more terrifying sequel. With excitement guaranteed to keep people on the edge of their seats, players will not only experience all-new environments, weapons and Zero-G controls but they’ll also experience the other side of the battle when they play as Necromorphs for the first time in multiplayer. We cannot wait to hear what fans think about this next chapter in the ever-evolving Dead Space saga!”

Dead Space 2 pushes the limits of action, horror and terror. After mysteriously awaking in a sprawling, massive city anchored to one of Saturn’s moons, hero Isaac Clarke again finds himself thrust into the middle of a relentless Necromorph outbreak. Surrounded by the screeching cries of undead monsters and the haunting drum of echoing noises, Isaac plots a course through The Sprawl. Dead Space 2 is noted by critics worldwide for delivering an epic terror experience that takes players on an explosive thrill ride filled with intense action and spine-tingling scares through deep space.

Gamers everywhere can now immerse themselves in events that set the stage for the action-horror storyline of Dead Space 2 with Dead Space for iPhone®, iPad™ and iPod touch®. Working closely with Visceral Games, EA Mobile development studio IronMonkey Studios created a unique story and gameplay experience for iOS gamers. Featuring a fully voice-acted stereo soundtrack, plus orchestrated score and sound effects, players can hear every footstep in the dark empty passages and feel the tension build as they are pulled deeper into danger. Coupled with cutting-edge visuals that are rich in effects and atmospheric lighting, Dead Space reproduces the cinematic horror of the console experience and sets a new benchmark for graphical fidelity on the iOS platform.

Dead Space 2 includes a one-time-use Online Pass registration code that gives players access to all of the online features in the game. Players that do not have a code can purchase the Dead Space 2 Online Pass for 800 Microsoft Points on Xbox LIVE Marketplace and $9.99 on the PlayStation Network.