Jeff took a look at the Powermat back in November and found it be a rather interesting device… The new Powermat, the 2x is available in Sprint stores now for $79.99 and it’s supposedly compatible with many types of devices right out of the box, but if you’re a BlackBerry user you’ll need to cough up and $30..

Powermat, the leader in wireless charging, today announced the availability of the Powermat 2X two-position charging mat in Sprint stores nationwide. This comes just one month after the company’s recent pledge to significantly expand its reach within the consumer marketplace. 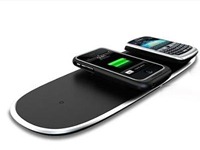 Unveiled at the Consumer Electronics Show (CES 2010), the Powermat 2X is the first at-retail product to usher in Powermat’s extensive new line of mats and chargers that will expand both the number of devices consumers can wirelessly charge as well as the multiple ways they can charge them. The two-position charging mat allows users to wirelessly charge up to two devices simultaneously from one power source, losing both the tangled mess of cords and the hassle of constantly plugging and unplugging. With its small footprint the Powermat 2X is also ideal for multiple charging locations such as bedside or desk side.

"We are pleased to be working with Sprint to offer the consumer the freedom and convenience of Powermat as well as to launch the Powermat 2X," said Ron Ferber, President of Powermat. "Not only does Powermat provide the freedom to charge a Smartphone without the constant plugging and unplugging, but they can also charge the rest of their handheld gear without the hassle and tangle of cords."

With a price-point of $79.99, the Powermat 2X comes complete with the multi-faceted Powercube Universal Receiver and eight Powercube tips. The Powercube works with hundreds of devices including eBooks, Bluetooth headsets, handheld games, music players and phones.

In addition to the brand new Powermat 2X, Sprint stores will also carry Powermat receivers for BlackBerry® Curve(TM) 8330, BlackBerry Curve 8350i and BlackBerry Tour(TM) 9630. The Powermat-enabled BlackBerry covers, retailing for $29.99 each, allow consumers to simply replace the existing cover on their BlackBerry with a Powermat-enabled cover and then simply drop and charge at their convenience.

Powermat is the first wireless charging company to gain national distribution with leading retailers in the U.S. market including Best Buy, Target, Amazon.com, Bed, Bath & Beyond and now Sprint.

Powermat is a complete solution for simultaneously delivering real time, wireless charging to multiple electronics including mobile phones, music players, handheld games, electronic readers, GPS devices, Bluetooth headsets, netbooks and laptops. Powermat technology has been miniaturized to a level where it can be embedded into virtually any device, as well as walls and table top surfaces. Powermat technology is fast, efficient and safe, and revolutionizes the way consumers charge and power. For more information, please visit www.powermat.com.