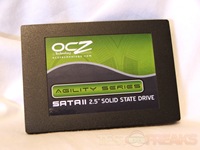 The Solid State Disk or SSD is here to stay, they are the future of storage. I see them eventually almost fully replacing the mechanical hard disk. They use less power, they make no noise, they’re much more durable and they’ve generally got faster access times than standard HDDs have. The write speeds though have yet to really catch up to those of a standard HDD, but they’re getting better or faster. One company that I think is on the forefront of SDD technology is OCZ, they’ve got a vast lineup of drives in their catalog, and it seems every couple months or so they introduce another model or series of SSD drives.

Today I’m looking at the new Agility Series of SSD Drives from OCZ Technology, specifically their 60gb capacity model. The Agility Series is the middle of the road product line, between the budget style and the high performance style, they’re sold as a ‘mainstream drive’, or something for someone who wants good performance but yet wants a lower priced drive than other SSDs out there today. I’ve put the OCZ Agility Series SSD up against a few other drives including another SSD for testing and comparison, so read on to see how it performs…


The OCZ Agility Series of SSDs comes in a little green presentation style box, with specs and features listed as expected. 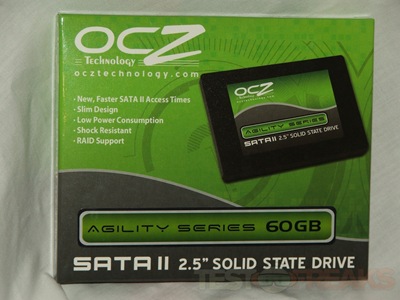 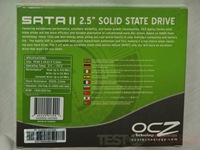 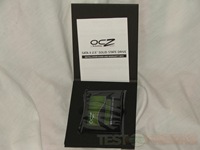 The drive itself has a black metal housing with an identification sticker on it. The bottom is silver with another informational sticker as well. On the end we find the SATA connection as you might expect. 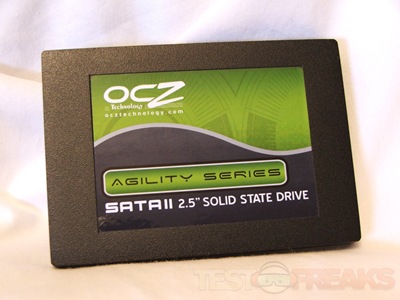 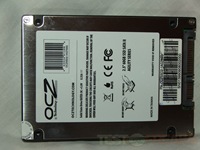 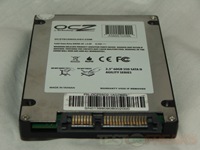 I like the metal housing of this drive, yes it adds weight, but to me metal seems more durable and protective than plastic would be. SSD drives aren’t exactly inexpensive, and I’d rather err on the side of caution when it comes to the casing and protection.  You could also look at it as the metal casing will be a better heat conductor than a plastic casing would, with the metal possibly keeping the SSD a bit cooler than plastic would. 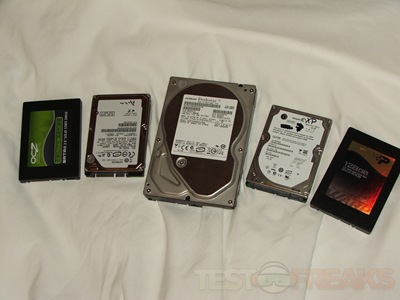 First up is the ATTO Disk Benchmark Tests on each drive. Instead of a graph here are the individual tests for you can get a better idea of the performance: 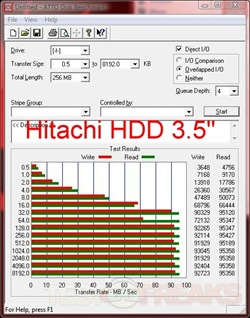 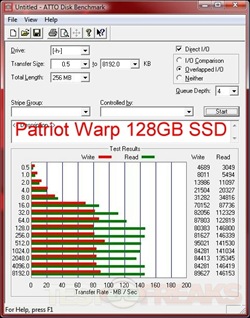 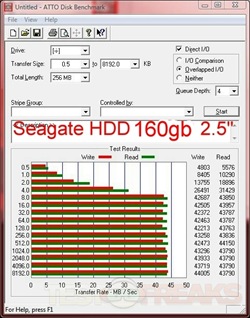 Just by glancing at these results you’ll notice one thing, there seems to be a big difference between the read and write of the SSD drives compared to the standard hard drives. This is to be expected though, so no surprise.

If you look at the OCZ and the Patriot tests it might look a bit odd, almost like the OCZ didn’t do so good. Look closer though, the program had to rescale the graph actually to fit higher transfer rate numbers in there compared to the Patriot SSD. The OCZ Agility Series SSD just blows away the other drives I’ve got in terms of Read Performance in this test. The OCZ SSD also looks to have the fastest write speeds as well.

That’s not the only test I’ve got though. The OCZ Agility Series SSD completely blows away the competition as you can see.

The next test is another from SiSoft Sandra, this one is the File Systems test and it’s in two parts for you.

Drive Index: is a composite figure representing an overall performance rating based on the average of the read, write, and seek tests, and file and cache size. The Drive Index is intended to represent drive performance under typical use in a PC. A larger number means better performance. The weighting of the results is not equal it represents the distribution of different files sizes as used on these devices (obtained through field research).

The first graph is the general results: 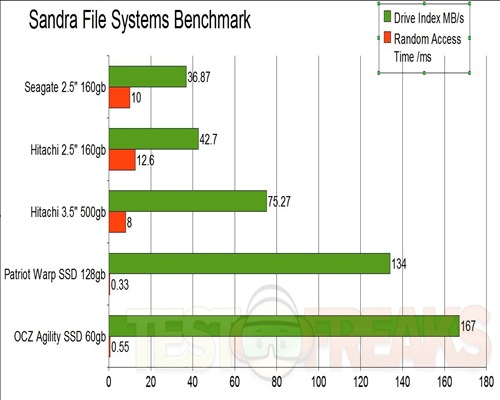 and here again we see the OCZ Agility scores very high, leaving the Patriot Warp SSD a bit behind.

The Files Systems Test also gives a complete breakdown as well, so here’s the actual scores for each drive. There’s a lot of information in this graph, so you might want to click it to get a larger view. The ordering of the graph is slowest to fastest with the Buffered Read speed as the reference point for the ordering. 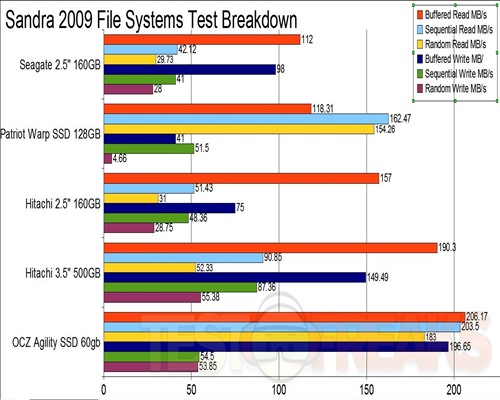 Look at the Random Write for the Patriot SSD, yes it’s correct, I ran the test three times and got very similar results each time.

We can see overall that the OCZ SSD drive is the best performer really, with only the Hitachi 3.5” drive inching ahead in the Sequential Write and Random Write tests.

For the last test I’ve got DiskBench, but it’s actually two more tests really. Both tests measure the times to Copy From and Copy To the drives, and they report the Transfer Rates as well.

The first test I used a small .AVI video file that is 349Mb in size.

The first part shows the time is takes to Copy to and from the drives, lower times are better of course. The chart is arranged best to worst with Copy To or Write speeds as the reference point. The Hitachi 3.5” HDD and both SSD drives are fairly close really, with the Hitachi 3.5” drive leading by about 20 seconds when it comes to write speeds. The Copy From speed though is the fastest with the OCZ SSD drive.

Here are the actual transfer rates for the above test. Using the write speed as a reference for the ordering and going slowest to fastest. 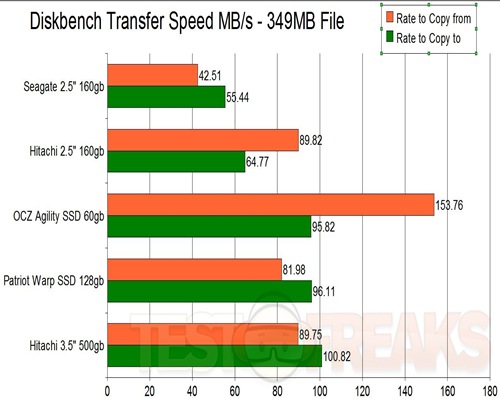 Here we have an almost better representation of the results of the tests, you can really see how close the performance is for the write speeds and how much of a difference there is with the read speed on the OCZ SSD drive.

The second part of the DiskBench testing is using a larger file, specifically one that is 3.15GB in size, I used my Windows7 .ISO file actually for this. Same thing, testing Copy to and Copy from speeds. Lower is better of course, and the chart is organized best to worst with write speed as the reference point of ordering. 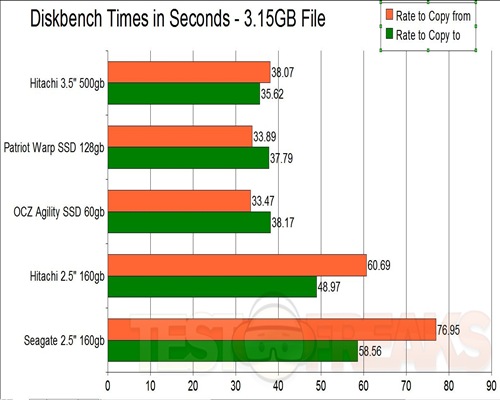 We see almost the same results with the larger file as we did with the smaller file, in terms of relative times and ordering but the Patriot seems to handle the larger file just a bit better as the positions are switched, with the OCZ moving to third place here. Still thought the times are very close, less than a seconds difference for both tests on the SSD drives.

…and finally here’s the Transfer Rates for the above test. Graph ordering is again based on write speed, but it is ordered slowest to fastest. 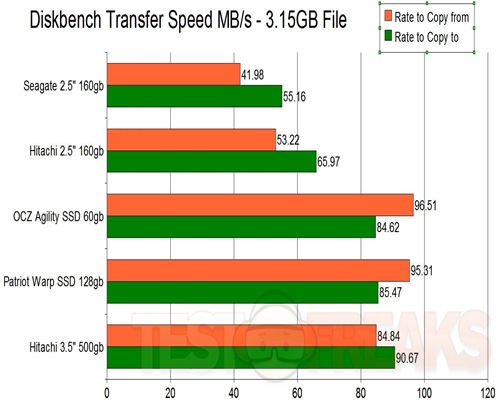 As expected the regular 3.5” hard drive pulls ahead, but not by much really.

If you look at the DiskBench tests, the OCZ SSD drive doesn’t come out on top every time, but with the other tests it does, so it’s subjective or maybe objective, depending on how you look at it.

If we go back and look at the specs that OCZ claims for this SSD it says Up To 230MB/s for read speed and up to 135MB/s for write speeds. Did we achieve that in any of the tests? No, but we came fairly close. Note that it does say ‘up to’ those speeds, it all depends on what other combination of hardware was used in the testing. I don’t have a clue exactly what the specs of the machine they used for their testing, so based on my results I think it’s entirely possible to achieve those speeds given the right set of circumstances.

Still though I’d choose the OCZ SSD drive over the others easily as something to replace my standard 2.5” HDD with that’s in my netbook or laptop or even in my PC really.

As a matter of fact I’m going to do just that, and then do another little write up about regular HDD vs SSD in a netbook.

Conclusion:
The OCZ Agility Series SSD is easily one of the best choices if you’re looking to replace or upgrade the hard drive in your laptop or netbook in terms of capacity, performance and pricing. Others at the same price point have lower performance specs, and might even cost higher.

The performance numbers speak for themselves really, this SSD outperforms the regular 2.5” hard drive easily.

The read speeds for the drive are outstanding, with the write speeds leaving a little to be desired, but still overall the Agility Series 60gb SSD is a great drive.