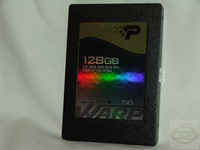 It’s been said that solid state drives are going to soon replace our ‘regular’ hard drives, well I call BS on that, mechanical hard drives have been around for along time and they will be around for much longer. Yes SSDs are coming down in price but their capacities are nowhere near that of normal HDDs, so until they reach the 1TB + level I don’t foresee them replacing anything but maybe notebook hard drives. Many laptops or notebooks now have the option of being purchased with SSDs, which is a good thing as laptops tend to be moved around a lot and the less moving parts the better really, but as for desktops, it’s not going to happen anytime soon really…

Today for review I’ve got my first SSD or Solid State Drive, I think by now you should know exactly what an SSD is, so their’s no need to go into that explanation. The SSD I have for review today is from our friends at Patriot Memory, it’s their new Warp Drive and it has a capacity of 128gb so it’s rather large in terms of SSD drives. Since it’s my first type of drive like this I don’t have anything to compare it to, so I’m comparing it to some standard HDDs that I’ve got on hand, two 2.5" drives and two 3.5" drives to see how it stacks up against them.


No video for you today as there’s not much to really show you, the Patriot Warp comes in an attractive box with specs and features listed, there’s a small window on the front so you can see part of the drive. 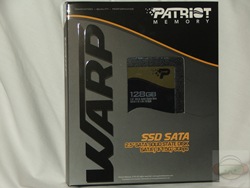 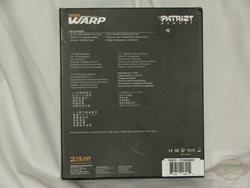 Inside we find another plastic box that actually houses the Warp:< 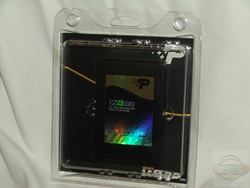 The drive itself is rather plain looking, sort of resembling a thin block of metal, there’s a holographic label on the front with the Patriot logo and information about the drive, on the back we can see the SATA data and power connections along with another small identification label or actually an engraving with serial number, model etc. 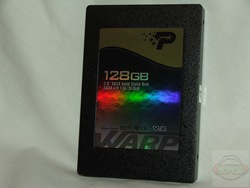 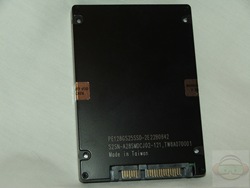 PE128GS25SSDR
Patriot Extreme Performance (EP) Warp series Solid State Drive (SSD) is the latest in storage technology. Using the state-of-the-art NAND flash chips and ultra-fast controller, the Warp v.2 SSD is available from 32GB to 128GB capacity delivering a blazing transfer speed up to 175MB/s read and 100 MB/ write. Compared to conventional disk drives, built with 100% moving-free parts and housed in a vibration and shock resistance housing, the Warp SSDs provide a rock solid operating environment even during the most extreme working conditions. A perfect solution for a wide range of applications which demand ruggedness, minimal power consumption, cooler temperature and silent operations. Built to sustain heavy usage, the Warp SSDs have built-in wear leveling technology in addition to the standard 2 year warranty to maximize the life span of the drive and preserve your data integrity by automatically marking and blocking bad data cells.

Note: SSD’s do not need to be defragmented. Doing so may lower the lifespan.

*Consumers may see a difference between the physical capacity and actual capacity of SSD drives. The storage industry uses a decimal system to report the capacity while operating systems use a binary format to calculate the actual capacity. This difference causes the SSD drives to show a lower capacity. SSD¡¦s, also is reserved a portion of the capacity for formatting and wear-leveling. This can amount to up to 5% of the drive¡¦s capacity.


So before we get into the testing, here’s the DiskInfo for the drives used in the testing including the SSD. They are all SATA drives: 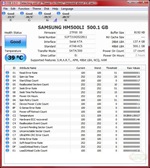 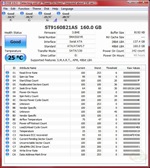 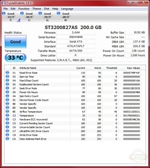 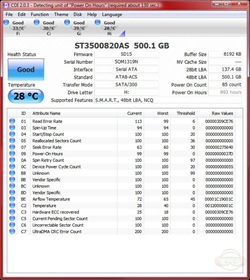 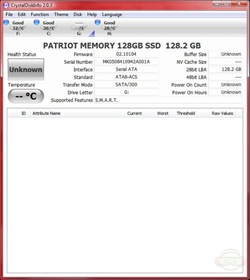 I tested these drives with my main system which consists of an Intel C2Q6600 CPU, EVGA NF680i Sli motherboard and I have 8gigs of ram installed.

First up I’m using ATTO Disk Benchmark, ATTO is used by many disk manufacturers to test their own disks, and has sort of become a standard for disk testing. I’ve left it at the default settings and changed nothing as to not affect the results of the testing. Here’s the individual test results:< 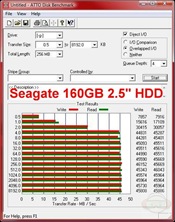 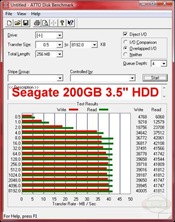 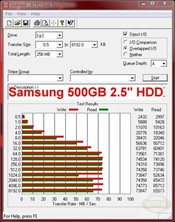 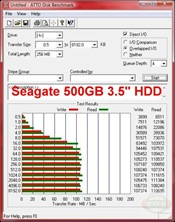 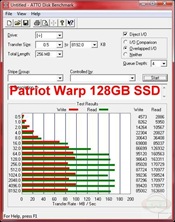 and here’s a comparison graph of the final test:

As you can see the Patriot Warp SSD would make a great choice to replace the 2.5" SATA drive in a notebook, excellent read speeds and higher write speeds than the newer Samsung 2.5" drive.

For read speeds the Warp easily blows away the Seagate 3.5" perpendicular drive but falls behind in writing speeds.

If we look back at the specs for the Warp we see they claim up to 175MB/s for Read Speed and up to 100MB/s for write speeds, the actual speeds in my tests are obviously lower, but we’re not exactly sure how they get those speeds or what they used for testing either. If we look back at the individual tests, we see that the 256, 512, 2048 and 4096 tests are all above 170MB/s for their read speeds though.

The next test would be using SiSoft Sandra 2009, this is a test that measures Raw performance:

SiSoft Sandra 2009 Physical Disks Benchmark
Benchmark hard disks (i.e. the disk itself, not the file system).
As the test measures raw performance it is independent on the file system the disk uses and any volumes mounted off the disk.
Read Test: Sequential across disk
Write Test: Sequential across disk
Seek Test: random, full stroke
Drive Index: is a composite figure representing an overall performance rating based on the highest read or write speed across the whole disk. Thus the higher the better.
Access Time: is the average time to read a random sector on the disk, analogous to latency response time. Thus the lower the better

for raw performance the Patriot Warp SSD just blows away all the other drives in both tests easily.

Next up we’ve got CrystalDiskMark, this one runs quite a few tests, 5 times each and averages them out for the results, so it gives us a good idea of the performance. The results are measured in MB/s or bandwith so the higher the better.

Here again we see read speeds of the SSD easily beat out the other drives in the testing, and the write speeds are not bad either beating out most other drives except for the Seagate 500gig when it comes to Sequential Writing.<

and for the final test I’m using the HDD benchmark that is part of the CrystalMark testing suite of tests, it’s from the same company as CrystalDiskMark as you can tell by the name, but it’s a bit different in what’s tested so I figured why not included. Here again results are shown in MB/s and higher is better.

The results are virtually the same with some minor differences in there.

From what I can see from my testing the Warp SSD should get it’s rated speeds or at least very close to them depending what you’re doing of course.

Conclusion:
The Patriot Warp SSD drive is a nice choice to replace your notebook drive, it offers much better speeds in both read and write than standard 2.5" HDDs do, and of course you’ve got the bonus of no moving parts to worry about as well. The Warp might not be as fast as newer 3.5" drives are but it’s close, and the read speeds surpass that of most standard hard drives today.

SSD drives have dropped in price substantially since their first inceptions, there was a point when they were a luxury item but now they’re well within price range of the average consumer. They still aren’t close those to the per gigabyte price of standard hard drives, so until that time comes we won’t seem them really going mainstream anytime soon.

Cons:
Write speeds could be better