The next thing I did was install my Blu-ray/DVD-RW drive and my 3.5” card reader in the 5.25” bays. Cooler Master does not include a 5.25” to 3.5” adapter but I had my own. Very simple just slide them in and lock them in place. I normally have three 5.25” devices in my system, the Blu-ray, the card reader and a HDD dock for hot-swap so I lose the dock basically. The HAF XB isn’t for my type of setup for work, as you know it’s more for a gaming system with not much stuff in it. So if you intend to use it as an all around chassis, then chances are you’ll need to make sacrifices along the way. 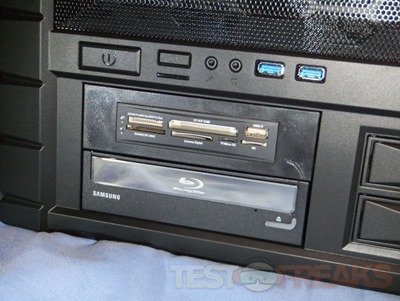 If you paid attention the specs or the unboxing then you’d know that the HAF XB is really designed to be used with SSDs or 2.5” drives as there are only two spaces for 3.5” drives to fit. My system uses one SSD, and three 3.5” drives for a little over six terabytes of storage with the SSD being my main operating system drive. Luckily only two of my 3.5” hard drives are actual storage and the third is used for automated backups, so I can sort of live without it and work around not having it in the system 24/7. Your SSD or other 2.5” drive goes into the rack and it’s held in place with the included rails, installation is very simple then you just need to run your power and data wires to it. 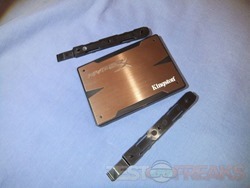 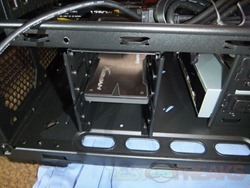 The next thing I did was install the motherboard tray back in the case along with my video cards and soundcard. One of the cards is a longer AMD 7870 and it fits just fine in the case with room to spare so you’ve got plenty of room for large high end cards, and more than one obviously. 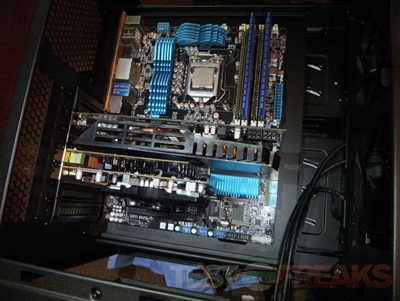 I did not install a rear fan in the HAF XB as I was using the Cooler Master Seidon 120XL for cooling my CPU, so the radiator and fan combination went there. 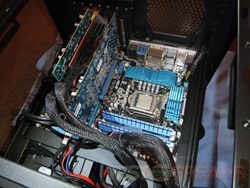 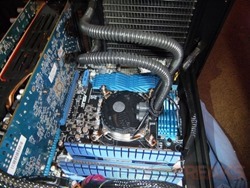 The part of the installation that took the longest was running and routing the wires through the case to their components. I would highly suggest a modular PSU for this type of system.

Here’s the view under the motherboard tray without it in place of course. There is room to route your wires though the case but planning is advised as space I limited as with any small type case like the HAF XB. 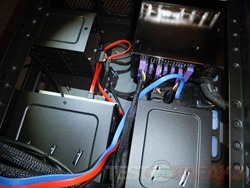 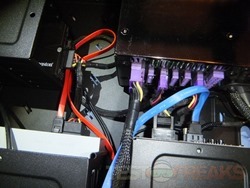 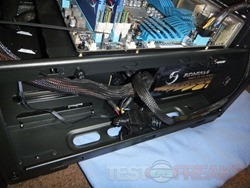 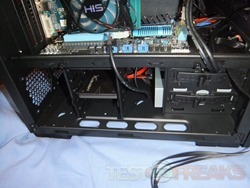 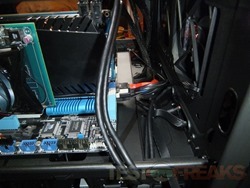 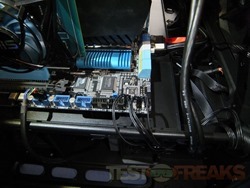 One note about the wiring is that there are no fan grills on the 120mm front fans on the inside so you have to take care how and where you run your wires. It would have be very nice if Cooler Master included fan grills on those fans.

Overall installation was as expected with  small form factor style case, the key is planning ahead and making allowances for the space you have to work with.

The HAF XB is a test bench as well as a regular case or lanbox as these smaller cases are often called.

Using it as a tech bench you’ve got full open air for good cooling and access to everything. When the sides are on there isn’t much of a temperature difference overall, the fans and all the open ventilation slits and holes do a good job at keeping everything cool. I think there was maybe 1-2 degree C difference with the sides on and with the sides off, sides on giving you a higher temperature obviously. If you need more cooling performance you can install the two optional 80mm fans below the PCI slots and you could swap the front 120mm fans for larger 140mm fans. The space in the front where the 120mm fans are can also be used for large radiator if liquid cooling if more your style.

The fans aren’t the quietest out there, but they’re not overly loud either. Having the fans like that in the front and that whole rather large section does pose a slight problem with dust and everything. After about three weeks of using it it looked like this, so you might have to clean it often to keep it looking clean and the fans running at their optimal cooling performance. I should note it looks a lot worse than it actually is because of the flash that lit everything up and made it brighter. 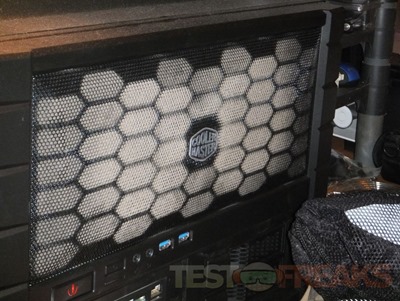 There isn’t much in the way of lighting on the case, the power does have a bright red LED in it and there’s a small red LED for the HDD indicator. Here’s a picture taken in the daytime with no flash, even in daytime lighting the power LED is very bright and you can hardly see the HDD activity LED. 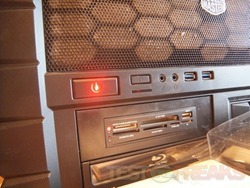 So that’s that, it’s all in and up and running. Not a bad case really.