The first thing I did was to charge the Neptor battery pack and this is done with the included USB cable or any other microUSB cable you might have floating around. It’s a large battery so it does take a while to charge, a couple hours depending on how much of a charge is in the battery when you get it. 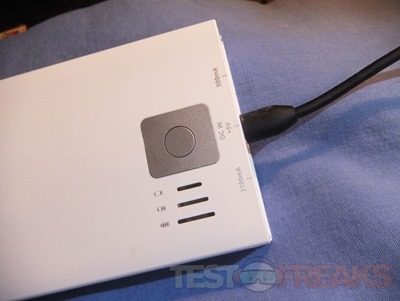 The LEDs light up and blink to let you know it’s charging and then once they are all lit you’ll know it’s done and it’s ready to be used. It only took a couple hours to charge the battery pack but it wasn’t fully dead, it had a charge when it arrived. If the battery is fully drained it can take up to eight hours to charge it fully. It charges over USB so we all know that’s not the fastest, but it’s handy and it works as I think everyone has access to a USB port at one time or another during their day. 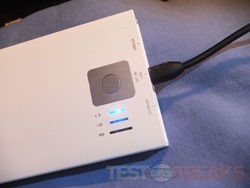 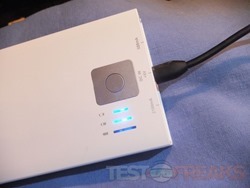 So for testing I grabbed a few assorted things and charged them with the Neptor battery pack. I wanted to see what could be charged with it basically.

One thing great about this product is that you don’t need any special tips at all, as long as you have the UBS cable that came with the device then you can charge it. So I grabbed the cable for my ZuneHD and plugged it into the Netpor and started charging, it worked just fine. The charging indicator came on the ZuneHD and let me know it was charging. 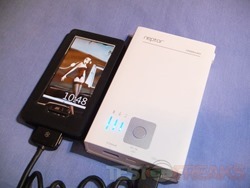 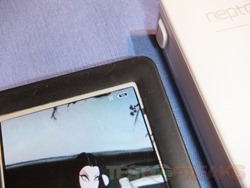 Many devices these days use a standard microUSB port like my HTC One. Included with the Neptor is a microUSB cable that can be used to charge it or you can reverse it and charge other things from the Neptor like your phone. 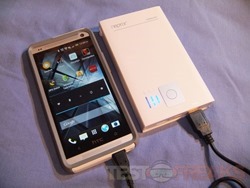 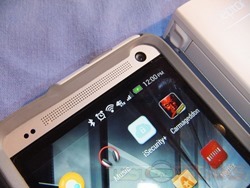 We all know the iPod Touch is popular but it uses a special cable which I hooked up to the Neptor and charged away.  I did find the iPod acted weird when I first plugged it in, it said the accessory wasn’t supported on it. I unplugged it and plugged it back in and it charged just fine after that. I was curious if I could reproduce the error so I could grab a screenshot but I couldn’t. I turned it off and turned it back on several times and unplugged and reconnected the Neptor to it and I never got the error again. Weird for the error, but I never saw it again after that first time. 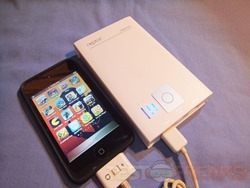 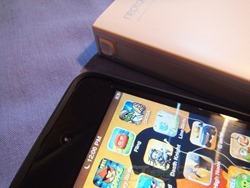 EagleTech also sent me their latest Bluetooth keyboard for review which I’ll be posting shortly, but I figured I’d try and charge that as well and it worked!  It uses a regular microUSB port but I used the one included with the keyboard, both of them worked though to charge the keyboard. 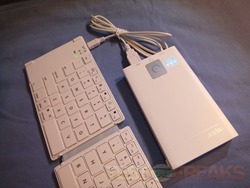 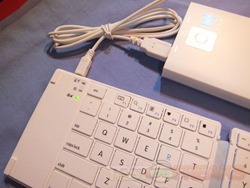 I also have the Joby Gorillatorch Blade which is just an excellent rechargeable flashlight. This one uses a miniUSB cable and it lights up blue to let you know it’s charging. I hooked it up to the Neptor and it charged just fine. 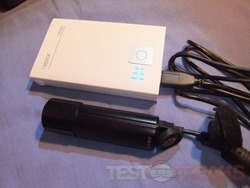 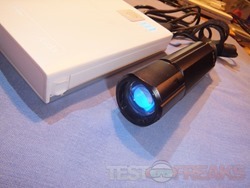 I have a few Android tablets and the funny thing about tablets is that not a lot of them can be charged over USB. Out of the four that I have, only one could be charged over USB, the Le Pan TC970. To charge a tablet you’ll want to use the 2100mA USB port as it’s considered a high drain device. I hooked it up to the Neptor using the Le Pan cable and it started charging. The 10,000mAH battery of the Neptor is enough to provide a full charge to most tablets and this was the case with my Le Pan, it drained the Neptor battery but charged the tablet fully. 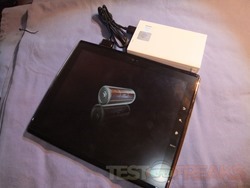 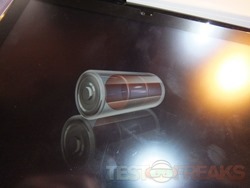 Oddly I couldn’t charge my PS Vita with the Neptor battery pack. I also have the Energizer XP4001 which has a 4000mAh battery in it and it would charge the PS Vita. I’m not sure why the Neptor pack wouldn’t charge the Vita as the Vita can be charged over USB and I did have it enabled to do so. I tried both the 500mA and the 2100mA ports, and neither worked for the Vita. As you can see though, everything else I tried worked just fine.

The Neptor battery pack will turn off automatically when it’s done charging your devices so there’s no need to monitor it all the time. You can set it on charge and then go about your business.

The Neptor battery pack does allow you to charge two devices at the same time, but of course you’ll drain the battery faster, but it’s nice to have the option.

If you need to you can actually use both USB ports at the same time for charging, but sadly EagleTech didn’t include a cable for that so you’ll have to find one on your own if that’s something you want or need to do.

One of the great features of this product is the replaceable battery, but I couldn’t find anywhere online, including the EagleTech site as to where you might purchase a battery. So as of now yes you can replace the battery but who knows where to actually get one?!

← Xbox One Not Backwards Compatible with Xbox 360
What’s Wrong with the Xbox One? →