I love toys and being a dad means I can get and play with all kinds of toys. My favorite is pretty much anything remote control, but helicopters hold a special place for me. Today for review I’ve got the Griffin Helo TC Assault which is a remote control helicopter that can be controller with either iOS or Android devices. The Helo TC Assault is special though in that it has missiles that actually fire, yes you can have a lot of fun with this little gadget.

So here we are again with the box. The Helo TC Assault package has a nice window on the front to show you the helicopter and basic specs and features listed. 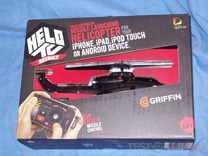 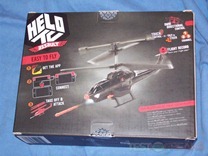 When you open the box you’ll find a plastic tray holding the helicopter and a smaller box, on the back of the tray is the bag of accessories. 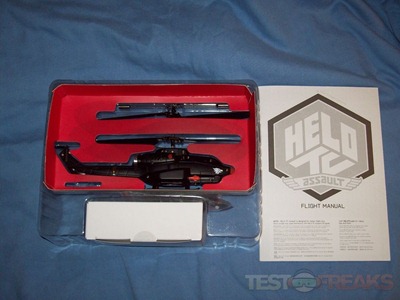 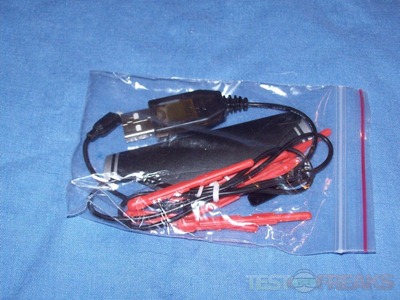 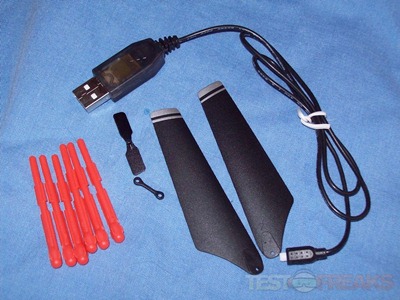 The helicopter looks like something out of the military but it’s all black, more like a stealth helicopter. 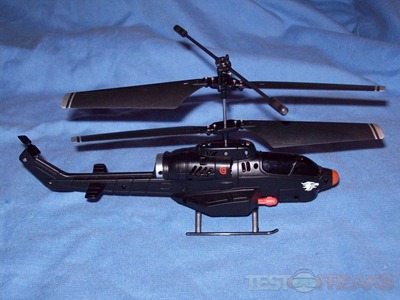 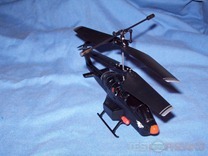 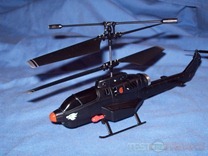 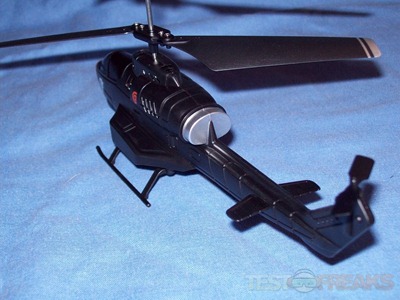 I think the main or coolest feature of the new Helo TC Assault is the addition of missiles that actually fire! There are two on them, one on each side of the helicopter in rocket pods. The detail on the helicopter is pretty good, it looks like a real helicopter. 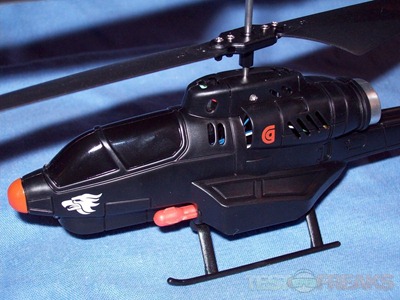 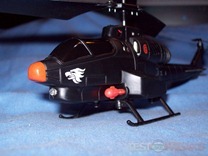 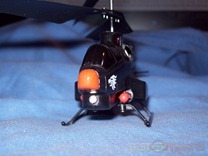 The tail rotor is odd as it faces up instead of on the side like most helicopters. 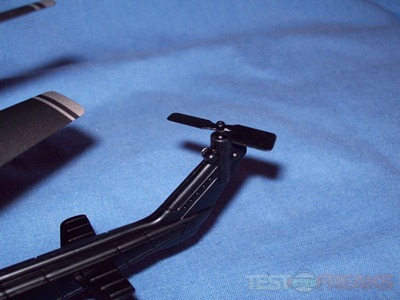 On the bottom you’ll find the infrared receiver, power switch and the charging port. 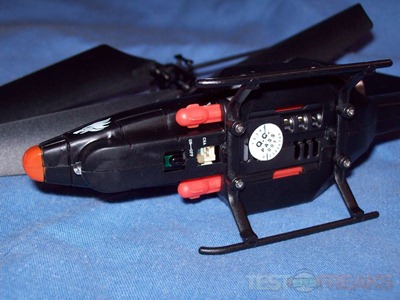 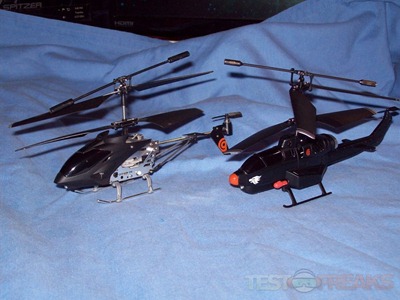 There’s an obvious difference between them, the original is more metal than plastic, while the Assault is mostly plastic. They both seem fairly well made though.

The first thing you’ll need to do is charge your helicopter, this is done via USB and there’s a an LED in the USB connection to let you know it’s charging and when it’s done. 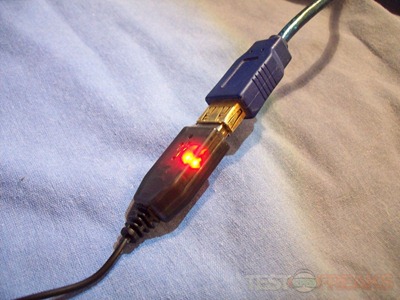 The Helo TC Assault has an extremely bright white LED in the front, I guess it might be considered a headlight. 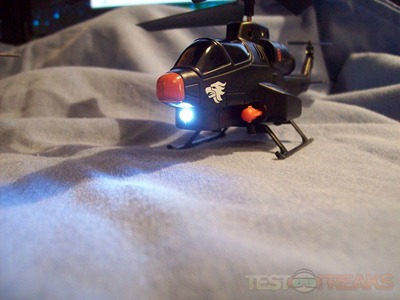 The original Helo TC only worked with iOS devices but the Helo TC Assault works with both iOS and Android devices. I’ve got Android phones and tablets and an iPod Touch 4th Gen. My phone is the Samsung Galaxy S Captivate which is running Android 2.3. 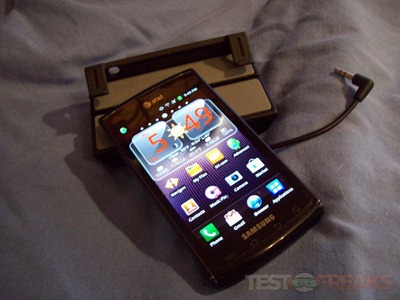 To play with the Helo TC Assault you’ll need to download the app from the marketplace, either iOS or Android. The flight deck is your control and you just put your phone into the deck and connect the 3.5mm jack into the phone. The helicopter is controlled by infrared but it uses audio signals or pulses and translates them into the infrared signals. The Flight Deck has soft springy tabs that hold your phone or MP3 player in place. 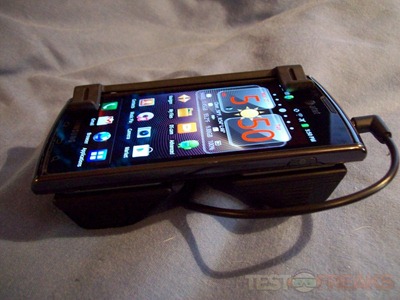 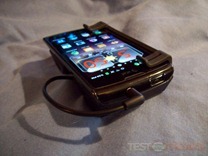 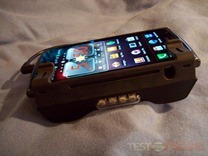 I also tried it with my iPod Touch just because I was curious for comparison. 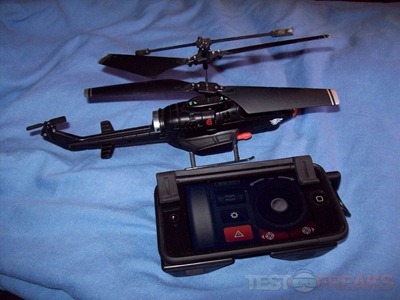 The app and controls is pretty much exactly the same for both Android and iOS, just some slight aesthetic differences really. The interesting thing is that you can control both the Helo TC and the Helo TC Assault wit the same app, you just push the button to switch between them.  There is a an Expert mode you can turn on or off, it just basically limits the throttle and when in expert mode there is no limit. You can control the helicopters with an on-screen joystick or you can use the gyros for motion or tilt controls. I found the joystick to be much easier than the motion controls. The app can be used by either left or right handed people, it lets you switch the joystick position to the left or right. 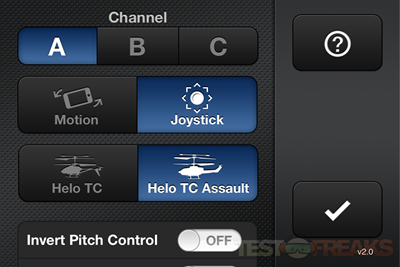 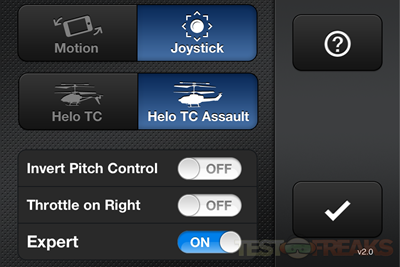 There is a Help section that has quite a bit of info for beginner and expert pilots alike. 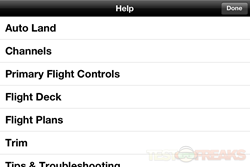 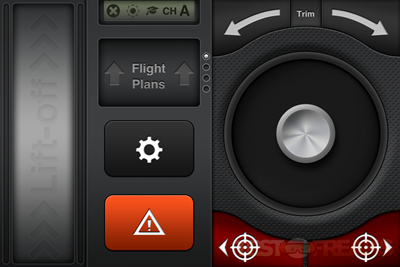 On the left is a slider for the throttle, slide it up for more power, slide it down for less. In the middle you have three buttons for Flight Plans, Settings and Emergency. The Flight Plans button allows you to record your flights and replay them. The Settings buttons is what I showed you above. The Exclamation point is the emergency landing, if you get into trouble just press the button and the helicopter will shut down and hopefully land safely. On the right side at the top you’ll see trim buttons, then below that is the joystick for flight control. On the bottom is the first buttons, you can fire the right or left missile independently of each other.

I used both Android and iOS for testing and I actually found that the iPod seems to work better for some reason, not sure why. The controls just seem more responsive as does the helicopter when using the iPod Touch.

Speaking of responsive, it’s an infrared helicopter so there is a slight lag in your commands to the helicopter. When you do something like adjust the throttle there’s about a one second lag between you doing it and it actually happening. This takes quite a bit to get accustomed to honestly, and you’ll crash often just because of this lag. Once you use it for a while though you should figure out that you need to make your adjustments before you actually want the helicopter to do it. You sort of have to think ahead really.

Crashing is something else, it’s going to happen no matter how skilled you are or how much experience you have. Luckily the Helo TC Assault is a tough little bird, I’ve crashed it plenty of times and it’s still going strong. The blades have some nicks in them but the helicopter still flies and it’s no worse for wear really.

Firing missiles is hard to do in flight as you sort of have to take your finger or thumb actually off of the joystick really to fire. I found that landing and firing is easier and more accurate. I was surprised that you can fire the missiles without flying. Once you really learn how to fly you’ll get better at firing but still it’s hard to do while the helicopter in in motion and have any real degree of accuracy.

Conclusion:
The Griffin Helo TC is a fun little toy yes, but it can take a lot of practice to get accustomed to flying it especially since it’s infrared. You’ll crash a lot but luckily the Helo TC Assault is very rugged and durable and thankfully Griffin included spare parts for you just in case you get shot down over enemy territory and need to make repairs. The Helo TC Assault is much more than just a little helicopter, this thing fires missiles and that just makes things more fun of course. I like the fact that you can control it with either Android or iOS devices, but I found that the app is picky in what it can actually run on, specifically for Android devices.