The first thing I did was charge the SBH 20 unit, this is done over regular microUSB so it’s simple to do. The unit has a 110mAh battery in it and Sony says you should get about 6 hours or talk or stream time and about 200 hours of standby time on a single charge. I think that’s fairly good myself as I don’t know who will be using something like this constantly for six hours at a time, if anything it will be turned on for your run or daily commute which might be an hour. Then again I guess there are people who fall in the extreme category and might want or need a bigger battery, especially those people who are constantly on the phone.  Personally six hours will get me through a few days of usage surely or even longer. The most I ever used it at once was at my kids karate classes which lasts two hours one day per week. 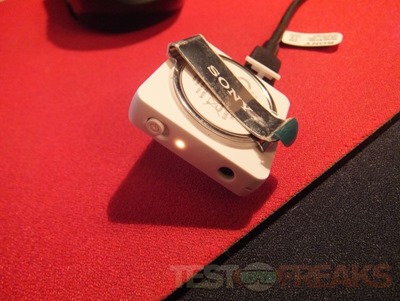 To use it you’ll need to plug in the earbuds which is easy, simple to do. From my use I think the headphone cord could be longer and I don’t like the short on one side and longer on the other style, but some people do. The cord is short because it’s meant to be clipped to your collar or around that area, especially since it can be used for making and receiving calls so you’d want the microphone to be near your mouth. Personally I don’t like stuff around my neck area, but that’s just me, so I would rather have a longer cord to be able to position it elsewhere. 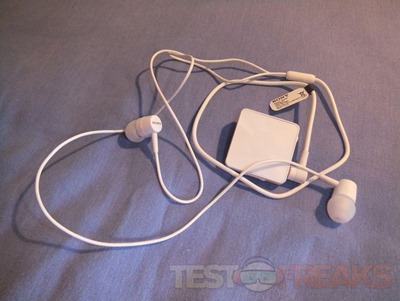 Primarily I used the Sony SBH 20 headset with my HTC One android phone. 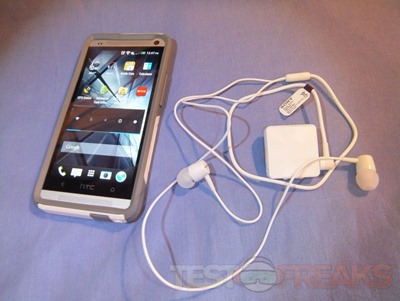 The HTC One has Bluetooth of course but it also has NFC built-in and so does the Sony SBH 20 headset. NFC allows you to just pass the SBH 20 over the back of the HTC One and it will pair to the phone without you having to really do much else. I’m happy to say that NFC works on the HTC One even with the case on. 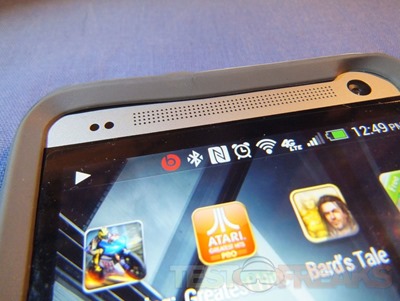 I like my headphones, specifically the Future Sonics Atrio M5s and since the SBH 20 uses a standard 3.5mm audio jack I could use them instead of the bundled ones. I think this is a great feature as you can use what you want with the SBH 20 and you’re not limited to only what’s included with it. 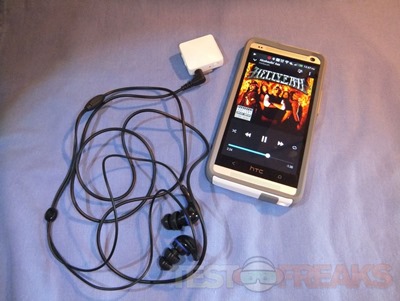 NFC is awesome, I wish more devices had it and with time it will become standard feature I’m sure. I’ve never used NFC before so this was all new to me and I was pleasantly surprised to experience just how easy it is to use. My HTC One has NFC as you know and I just turned that on and passed the SBH 20 across the back of the phone and it recognized it and paired them together, it couldn’t be easier really.  Yes you can use the normal Bluetooth paring which I did with my PS Vita, that works fine as well, no complaints there at all. I’ve found the PS Vita speakers to be a bit low especially if you’re using it outside so headphones are a must with it really, and wireless is even better so the Sony SBH 20 work perfectly with the PS Vita for me.

The controls worked perfectly with my HTC One, I could control the music by play and pause and of course I could go forward and back as well. I could also answer calls just by pressing the button.

Range is about ten feet, anymore than that and you will experience stuttering in the audio and then a complete drop of the connection eventually. Ten feet is more than enough for my needs and if you use it as it’s intended, then ten feet is fine.

The actual SBH 20 unit could be designed better surely. The buttons are very hard to see in bright light or even low light and in the dark forget about it. Sitting here now with it in my hand I can barely make out the buttons unless I angle it just right so the light catches them. You can’t just feel their location either, sure you know that play and pause and answer is in the center but you can’t tell right from left for forward and back unless you make sure the unit stays exactly where you put it and doesn’t move. The top is the volume controls so you’ll need to feel where the volume control is and then feel around for the locations of the other buttons in relation, seems like a lot of work to me honestly.

The unit weighs in at just over twelve grams making it very lightweight, after I had it on for a while I didn’t really even notice it was there. The build quality seems fine for what it is. it’s so light that if you dropped it the unit will survive surely, but I wouldn’t want to accidentally step on it or crush it as it is just plastic after all.

From my experience most of the time the bundled headphones that come with devices like these just aren’t good, but I was surprised with the headphones that can with the SBH 20, they’re actually not bad sounding. Sound is clear and there is bass and treble but they are slightly flat sounding, not exactly what I would call full sounding. These aren’t bass heavy at all, but it’s there and you can hear it.

I was curious if it was the headphones or it was the unit itself so I switched to my Atrio earphones and the sound was better, much fuller than the Sony set, then again the Atrio’s did cost about $200 so one would expect them to sound better. Again it’s great that you can use any set of headphones with the SBH 20, you don’t have to use the included ones, you can use your favorite pair.

Still though, the included Sony earbuds aren’t bad at all, I think most people will find them adequate for any type of music.

There really is no noise cancelling with these headphones except to jam them in your ears farther and turn up the volume! On a windy day you’ll hear the wind and you will hear background noises like cars driving by and people talking.

Call quality is ok, yes it’s clear and understandable but not as good as a dedicated Bluetooth headset like a Jawbone or Jabra would be. If I had to use it to answer a call I would, but I would prefer not to really.

Personally I just don’t care for calls in stereo, but that’s just me.

One of the interesting things to note about the SBH 20 is that you could use this as a Bluetooth audio streaming receiver. As long as you have a 3.5mm connection then you can use it with a set of speakers or you could plug it into your stereo with a male/male type 3.5mm audio cable on the input. Some cars have 3.5mm auxiliary jack for input, so you could use it there as well. So basically you can turn any headphones or speakers or anything with a 3.5mm input or plug into a Bluetooth wireless receiver for audio. Oddly Sony doesn’t mention this little feature anywhere on their site, but I think they should as it’s a good selling point.