I don’t use Plex or Piczza, but I loaded them in the N2310 to show you and to really use them you’ll need an account of which I don’t have, but you can get an idea of what they look like from the screenshots. 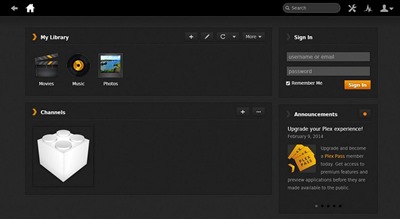 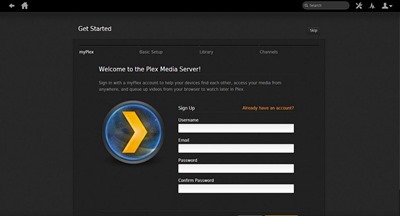 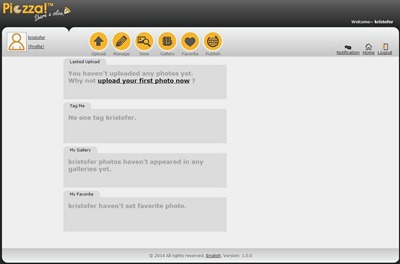 One of the things everyone might use is the WebDisk, and it’s a fairly basic but useful application. It’s simple to use, just transferring files really, it reminds me of an FTP program honestly. You can enable it and all of the users can login from your home network or even remotely via your Thecus DDNS address. 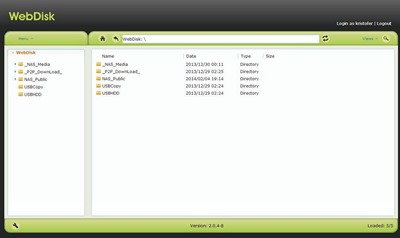 Next I want to quickly cover the actual control panel to show you the options you have access to. It’s divided into seven sections for System Management, Storage, File Sharing/Privilege, Network Service, Application Server, Backup and External Devices. 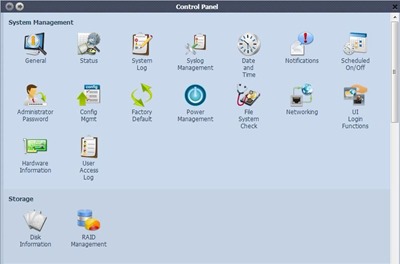 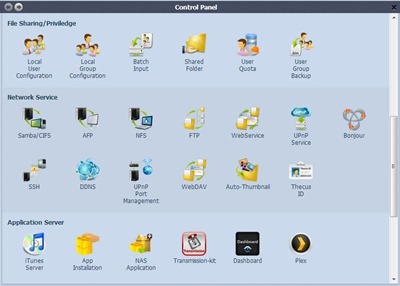 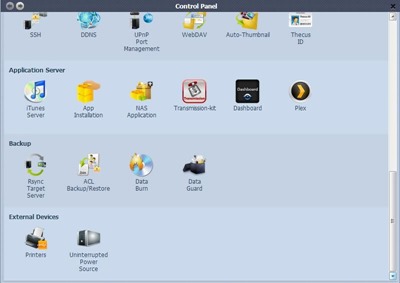 For the most part you’ll find the things you’d see on every other NAS in the control panel section but once you really get into them you might find some options missing or lacking. Like for example under Power Management you’ll only find two choices for Shutdown or Reboot. On other NAS boxes you’d expect to find or actually find power management for the hard drives where you can set them to turn off or sleep when not being used.

Thecus has also come out with an iOS and Android app for the N2310 and their other NAS boxes, it’s called Thecus Dashboard, which I installed on my HTC One Android phone. To use the app you’ll need to make sure the application is installed on the NAS, it’s in the farther up screenshot shown above pertaining to the app installation process and it’s just named Dashboard. The apps is supposed to be able to let you access your NAS remotely, and I say ‘supposed to’ because I could never get it to work, the app would just crash every time it attempted to find or connect to the N2310. I read the reviews on the Google Play store and apparently this is a widespread issue because many people have reported on the problem in their reviews. So I’m sorry to say that I can’t tell you anything about how the mobile access part works.

I can say that the included DDNS system works though. I was able to access the N2310 from my phone using the DDNS address I created via the Thecus site while I was away from home.

One other thing to note is the fan, it can be very loud when it’s up on high speed. When you first turn the N2310 on it’s running at full speed, at least it sounds that way, and then the fan settles down to a lower speed, and then speeds back up and then finally gets quiet after a minute or so once the boot process in complete. The NAS controls the speed of the fan, and it is audible when there’s no activity but not overly so, but I still wouldn’t want the NAS in the same room as I was if I was trying to sleep. I am a light sleeper though and like it to be as quiet as possible. The hard drives are audible as well, you can hear them spinning and you can hear when they access data. The combination of the hard drives and the fan is just too much for me to be able to sleep with this thing in the same room of even the next room.

I think the issue with the loud hard drives is the enclosure itself, I don’t think it’s designed to be quiet, then again I don’t know of any NAS boxes that are designed with silence in mind, but others I’ve owned are quieter than the N2310 is for sure. The plastic enclosure actually seems to amplify the sounds from the hard drives, it echoes really making them I guess seem louder. Another part of the problem is that I couldn’t find a sleep function in the N2310 where the hard drives would shut down when not in use, they just spin constantly. The location of the hard drives might play a role in the noise levels too, they’re in the front and it’s basically open, the rack is open with ventilation slits for airflow. Other NAS boxes I’ve owned have had the ability to essentially shut the hard drives off until they are needed and then they power on, but the NAS itself is still on so this way the drives aren’t constantly spinning, but it’s ready to go when you access it.

Thecus will release an update to ThecusOS (6.1) within two weeks which will enable drive spin down (when the system is not in use). This will also hopefully help address the noise associated with the system fan when the unit is in close proximity to the user.

So we know how it works and what it can do but let’s take a quick look at the actual performance numbers for the N2310 in terms of speed.

For my testing I test the transfer speeds to and from my computer to the NAS boxes of three different things, Small Video File Transfer (900Mb), Large File Transfer (3GB), and a Files and Folders Transfer which is a total of 3GB with 874 files within 199 folders of varying sizes. The three things I use for testing I think are similar to what an average person might be transferring back and forth to their NAS, essentially multiple files and folders with different sizes in them, large and small single files like videos.

The results in the graphs are the average speeds, not the maximum speeds these NAS boxes can reach. I use the average speeds because it’s the speeds you can expect all of the time. I have a gigabit network so everything is done over that. The same model and size hard drives were used in all the NAS boxes.

The graphs are ordered slowest to fastest. There’s a lot of information in both graphs so I lightly highlighted the N2310 results in yellow to make it easier to spot.

The first test is the Transfer to or Write test, I’m transferring from my computer to the N2310. 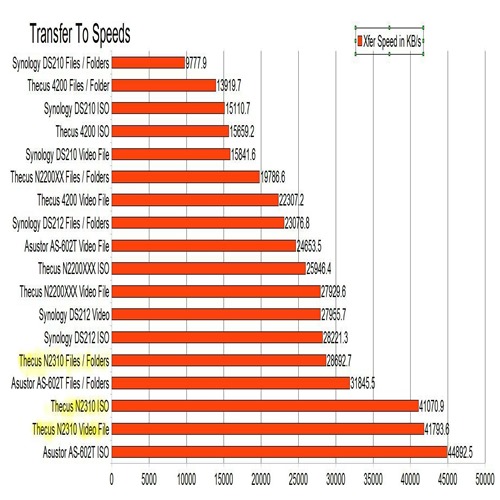 I was very much surprised by this test, I did not expect to see the N2310 perform so well. It is what most would consider a budget NAS box, but it came in 2nd, 3rd and 5th in the results which is impressive in my opinion. The N2310 sells for about $190 and the Asustor AS-602T sells for a little over $400, so the N2310 costs less than half the AS-602T but you’ll get very similar performance results. The AS-602T of course has many more features the N2310 doesn’t, but on just the performance here I’d say the N2310 is a very good deal.

The next test is the Transfer From test, transferring from the N2310 to my computer. 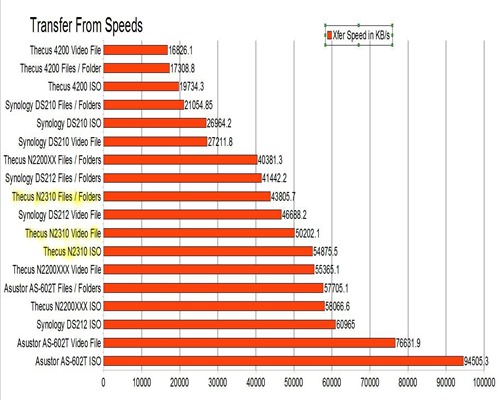 The results here are a bit slower for the N2310, but still not bad when you consider the price, it beats out higher priced NAS boxes.