A few months ago I did a piece with a title similar to this one HERE, and what I did was take XP, Vista and 7 and compare them to each other. A lot of you whined though that I was comparing 32bit operating systems to 64bit operating systems and you told me that my testing was wrong for that reason. I don’t think it was wrong, I stand by it, Vista and Win7 64bit operating systems are much more widely accepted and supported than WinXp 64-bit ever was. It’s a dead OS, it was an attempt by Microsoft to get into the 64bit arena but the support from manufacturers just wasn’t there and still isn’t really. I’m guilty of jumping on the 64bit bandwagon myself, I bought WinXp x64 as soon as it came out because I thought it was going to be something good, but I was wrong just like all of you out there were that adopted it right along with me. I wanted to use it as my main OS, but after several months I had to give up and just switch back to the 32bit flavor of XP because there were no drivers for it and half of my stuff didn’t work. I ran the 32bit and the 64bit versions of XP on separate hard drives and switched between them, but I found I was spending more time with Xp32 than I was with XpP64 because of the lack of support. I think it was almost a full year actually before I finally gave up and just formatted the hard drive that had Xp64 on it.

I’m not doing this because I mixed operating systems originally, I’m doing it because I’m curious and I feel it needs done again. Windows 7 has been out long enough now that quite a few bugs or kinks have been worked out and things should be running nice and smooth now.

So here I am a few months later back with what you could call part 2 of this comparison article. This one is truly all 32bit operating systems, yes I spent many hours installing and testing these operating systems to get a better idea of which really is the better choice. I used the exact same hard drive for each operating system to make sure it was truly comparable, fresh installs each time and of course it’s the exact same hardware for each as well. I’ve actually expanded the testing a bit to include networking, video encoding, and gaming and even how they handle things like USB drives or removable storage. This is probably the most comprehensive comparison out there today in terms of what was tested and all of the tests that were run on these operating systems, so I hope you learn something from it…

To begin with let me tell you my system specs, it’s humble system but it works well for me, it’s actually my HTPC and Gaming system in one that I have hooked up via HDMI to my HDTV. Normally it has Windows 7 x64 on it.

I’ve got several tests for you, or benchmarks if you will from different sources. 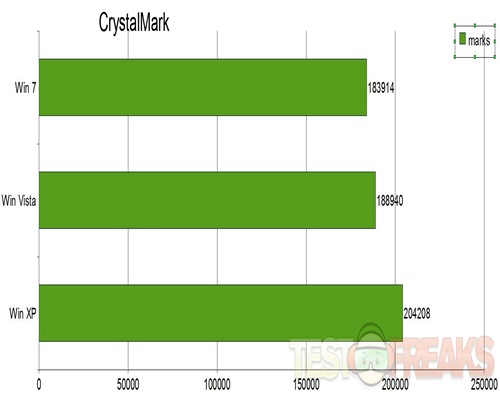 Well we’re off to the start that Windows Xp looks pretty good right? Well here’s the breakdown of the test: 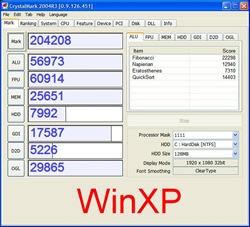 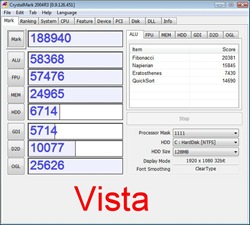 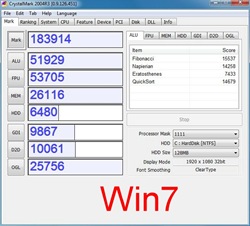 If you look closer at these results you’ll see that they vary quite a bit between the operating systems in certain areas, specifically graphics related tests. Yes the overall score looks like WinXp is better, but I’m not too sure…

The next test is Cinebench

The test procedure consists of two main components: The first test sequence is dedicated to the computer’s main processor. A 3D scene file is used to render a photorealistic image. The scene makes use of various CPU-intensive features such as reflection, ambient occlusion, area lights and procedural shaders. During the first run the benchmark only uses one CPU (or CPU core) to ascertain a reference value. On computers that have multiple CPUs or CPU cores and on those that simulate multiple CPUs (via HyperThreading or similar technologies), MAXON CINEBENCH will run a second test using all available CPU power.

The second test measures graphics card performance and is run inside the 3D editor window. The project file used can test all graphics cards that support the OpenGL standard. In this scene, only the camera was animated. This scene places medium to low demands on graphics cards and tests the maximum speed with which the scene can be properly displayed. 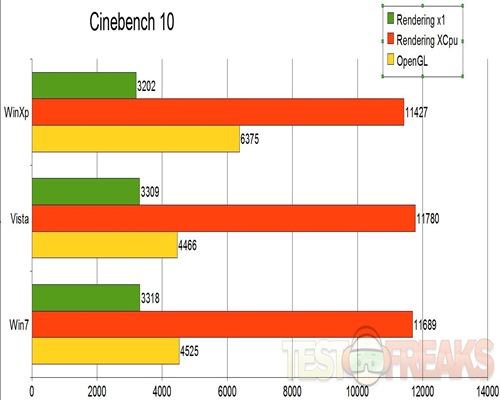 OpenGl is the only place where Windows Xp scores higher than the others, but the other scores are close.

Here’s screen shots of the tests:

The next test would be 3Dmark06. I think everyone knows this test, so it need no explanation. 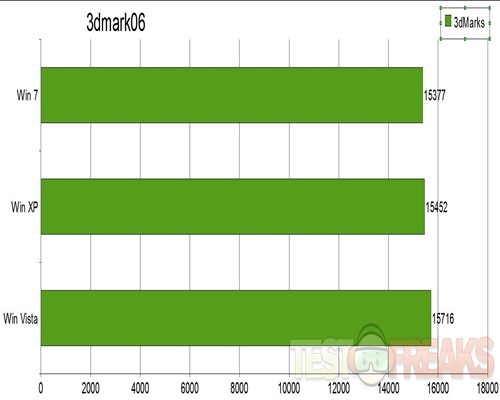 Next up is another game related test, I grabbed a game off my shelf and it happened to be FarCry2, so that’s what I went with. 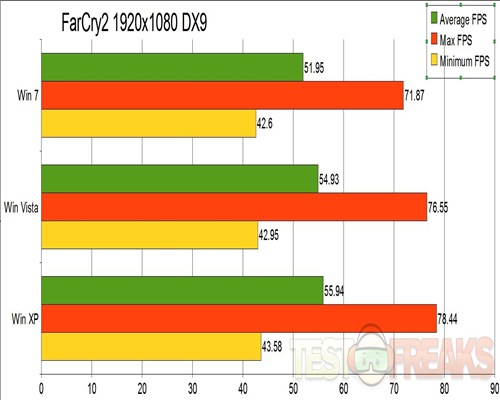 Windows XP appears to be better, but all of the frame rates are good so you wouldn’t have a problem playing it on any of these operating systems.

I’ve got one final graphics related test for you from SiSoft Sandra 2010 Portable Edition called the GPGPU Processing Benchmark.

The test involves the generation of Mandelbrot Set fractals that are used to realistically describe and generate natural objects such as mountains or clouds. Such instructions are used for audio and video encoding and decoding, games and other applications where the same operation needs to be applied to large amount of data. 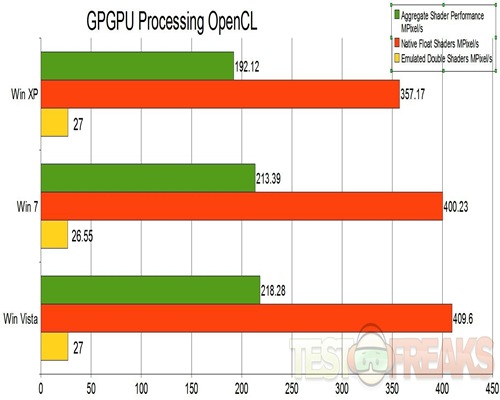 Vista appears to be a bit better here, both are better than Xp though…

Simply put, it is a reproducible measure of fast your machine can encode a short HD-quality video clip into a high quality x264 video file. It’s nice because everyone running it will use the same video clip and software. The video encoder (x264.exe) reports a fairly accurate internal benchmark (in frames per second) for each pass of the video encode and it also uses multi-core processors very efficiently. All these factors make this an ideal benchmark to compare different processors and systems to each other.

I’d have to say that they’re all pretty evenly matched overall here in this test.

Next up let’s check out how the operating systems handle storage related tasks.

The first test I have is the Physical Disks Test: 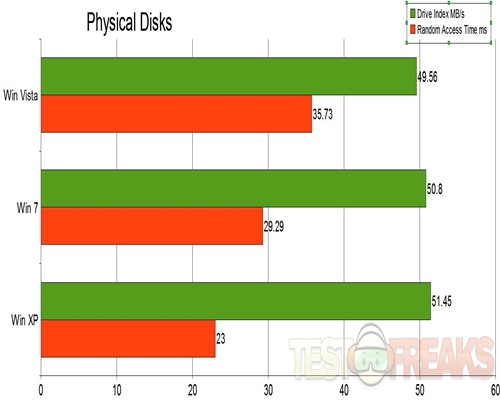 Windows XP apparently handles the hard disk better than the others, but not by much for either one really. We’re talking a few MB/s and then milliseconds access time, would you be able to tell the difference?

Next up I have the File Systems Test. 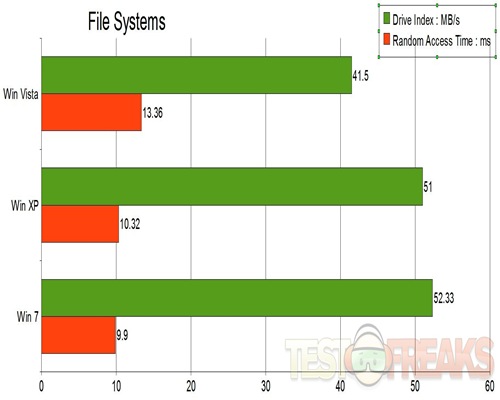 Hmm.. Windows 7 looks to be much better at keeping the house clean and things sorted neatly. 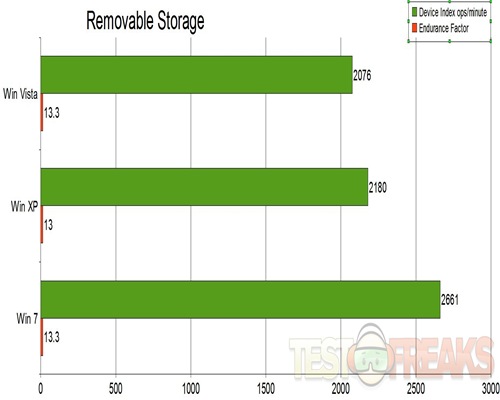 Windows 7 takes this one easily, with XP and Vista coming fairly close to each other in terms of performance.

The next test is a network test, now I tossed this one in because I was curious as to how each operating system handles the networking functions. It’s called Internet Peerage.

The test measures the bandwidth and latency from your computer to major sites on the Internet. 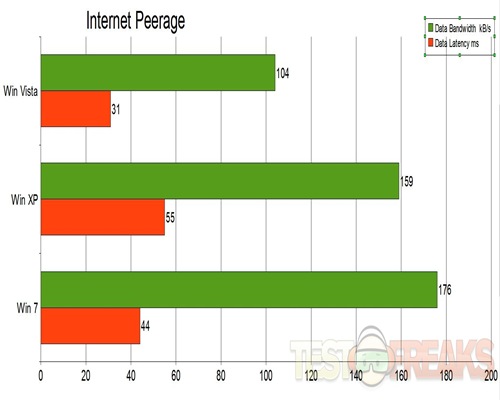 The last few tests I have are Memory and CPU related ones.

The Cache and Memory Benchmark is next: 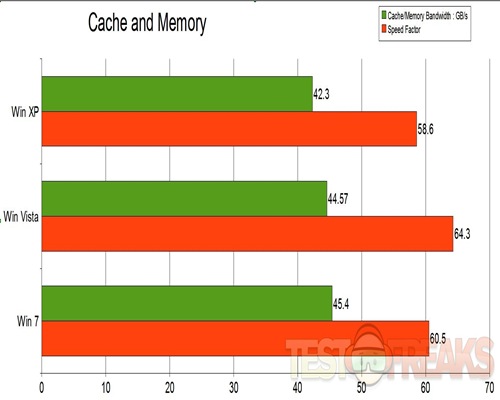 Windows 7 appears to the better choice I think.

Next is Processor Arithmetic. 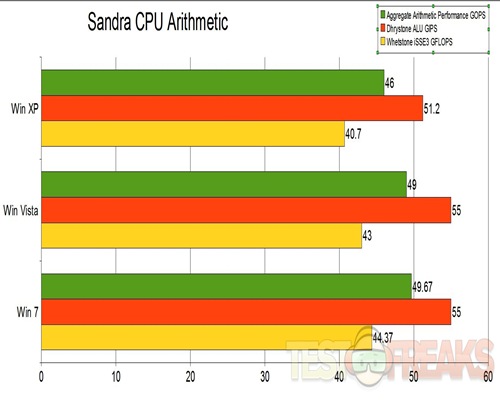 Windows 7 takes it again I see.. but not by much really.

The next test is the Processor Multi-Media Test. 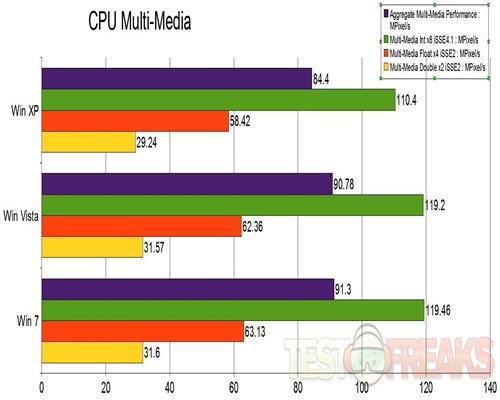 Here again we see Windows 7 takes the lead. Still though it’s not that much better over Vista, but quite a bit over XP.

The next test I have for you is the Memory Bandwidth Test. 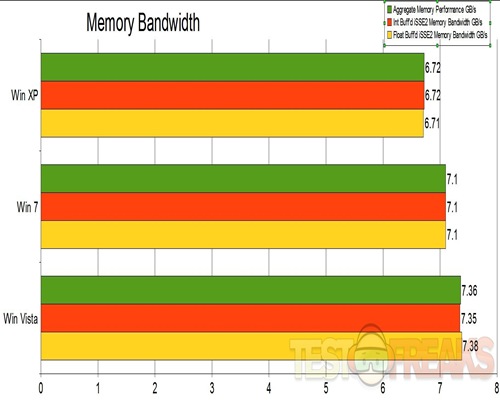 Hmm, Vista takes it this time, with Win7 coming in a close second and Xp falling a bit behind the other two…

Ok, this is it, the last test for you, it’s the Memory Latency Test. 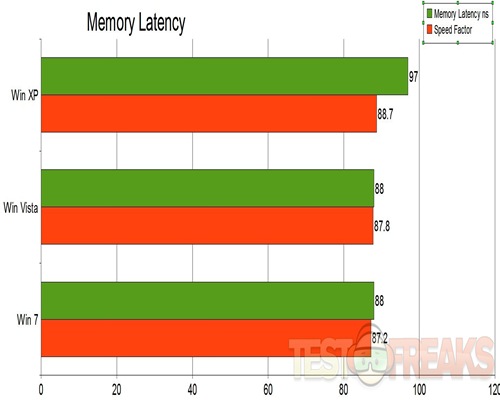 In conclusion, well you can draw your own conclusions, but for my main computers I use VistaX64 and Win7X64, none of my main computers have Windows XP installed on them anymore. My netbooks do have XP on them, only because I haven’t got around to changing them over yet, but it will be done soon. That’s my opinion, Vista and Win7 are superior over WinXp, we need to just let it die already and be done with it..

..I’m sure though a lot of you will have something else to say about that, so have at it in the comments please.

Let me know what you think, and which OS are you using?

Do you even use Windows XP anymore?  Should we just kill it finally and get it over with?

What do you think of Windows 7?

A small edit to this. Let’s tally up the scores, or which OS “won” each test. Yes I know some of them are so close it’s not going to make much of a difference at all, in might be  ‘win’ at the system level but you’ll never notice the differences really in the real world.

For fun though let’s assign 1 point for each time the OS won a test.

So there you have it, Windows 7 is the winner overall by far…